Deployment of Central Police Organisation (CPO) in Low Intensity Conflict Operations (LICO) is not a new phenomenon. Many units of CPO have served in the northeast, Jammu and Kashmir, Punjab and more recently in Left Wing Extremism (LWE) affected states of the country. It would be unfair to negate their contribution; as is being done, or attempted to, in certain sections of the media and intelligentsia. Recent setbacks suffered by CPOs and the state police in Chhattisgarh, Jharkhand, Orissa, Maharashtra and West Bengal have heated up a debate about their operational preparedness.

Intensity of LWE, in terms of motivation of Maoists; quality and lethality of their arsenal; standard of their training and complexities of political, media and international linkages espousing their cause have increased manifold. The CPOs are no longer facing ‘rag-tag cadres’ armed with country-made weapons and living off the land. The rebels are adequately supported by modern technology. It is a conflict situation where both sides have their distinct advantages and disadvantages. Over a period of time the Maoists have established their ‘control’ over large swathes of territory. It will take some time and toil for the CPOs to wrest control from the Maoists. Overnight results cannot be expected.

Brutality exhibited by their cadres in recent attacks on CPOs is testimony to this.

The LICO is a live situation. Plainly speaking, either one kills or gets killed. Unfortunately, this is the rule of engagement. The CPOs have to observe the law of the land, human rights, avoid collateral damage and above all, treat a rebel as an Indian and not an enemy. Maoists have no such qualms – brutality exhibited by their cadres in recent attacks on CPOs is testimony to this. In live situations operational lapses are costly in terms of casualties. All forces, irrespective of the colour of their uniform have learnt this – albeit hard way. Losing men and weapons by a uniformed and mandated force to enemy is unsavory, which affects the morale of the troops. Nevertheless, in such trying times two things must not be forgotten; one, that every force at some point of time in its history must have had a ‘bad patch’; two, that motivated units have resilience to pull out from adversity and again bask in glory. There is no reason for despondency.

Much has been spoken and written about the macro issues concerning anti-Maoist operations, but the micro issues which are battle-winning factors at unit and sub-unit level have been overlooked. There could be two reasons to this apathy; firstly, grass-root level tactical problems do not fascinate those who deal with macro policy issues; secondly, the unit and sub-unit commanders neither voice their concern in right forums nor take corrective action themselves.

Victory in war is an outcome of many successful battles and a battle is won on account of many successful minor tactical operations. So, tactical operations at company and platoon level cannot be viewed as a mundane chore – unworthy of a senior commander’s indulgence. Anti-Maoist operations are company, platoon and section commander’s battle. Hence, all shortcomings at unit and sub-unit level must be addressed and rectified with due seriousness.

It seems that some CPOs, for instance the CRPF, have been raised at a pace that outstrips the aspect of individual and collective training; unit and sub-unit integration and cohesion; rank and file structure, camaraderie and operational readiness. Such hastily-raised units if pressed into anti-Maoist operations are likely to encounter problems when faced with live situations. The units can be helped by imparting additional operation-specific training in the identified ‘grey areas’.

Concept of employment of CPOs needs a re-look. The forces are allotted by the Central Government on requisition from the state governments. The district collector and police chief have a say in their deployment. This arrangement is alright for policing and law and order duties. For anti-Maoist operations, the battalion and range commanders should have operational freedom and given adequate time for preparation, planning, reconnaissance and deployment of headquarters, units and sub-units in a systematic counter-insurgency grid. 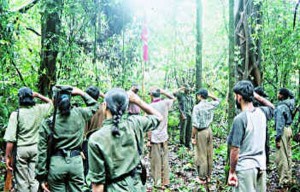 Grid deployment casts larger footprint, covers exit and entry routes; enables area domination, facilitates resource control and mass contact with the population. The population feels more secure and is forthcoming with information and intelligence. In a counter-insurgency grid deployment troops and sub-units are always available for each other’s cooperation and rescue.Practice of employment of CPOs in stand-alone company and platoon posts is tactically unsound. It is reminiscent of the era when the mere presence of police force was enough to deter the public. Socio-political forces have changed that mindset. It is commonly observed that a CPO battalion has its companies deployed all over the country and yet the battalion commander is expected to exercise an effective command and control over the unit. In such situations, as the unit cohesion suffers, sub-units are left to fend for themselves – operationally and administratively. A unit commander must be afforded the opportunity to train and deploy his unit together for a better operational performance. Deployment in penny packets is detrimental. A unit must not be deployed in more than two halves. CPOs employment and deployment should be spelt in terms of battalions and not in companies, as is the practice.