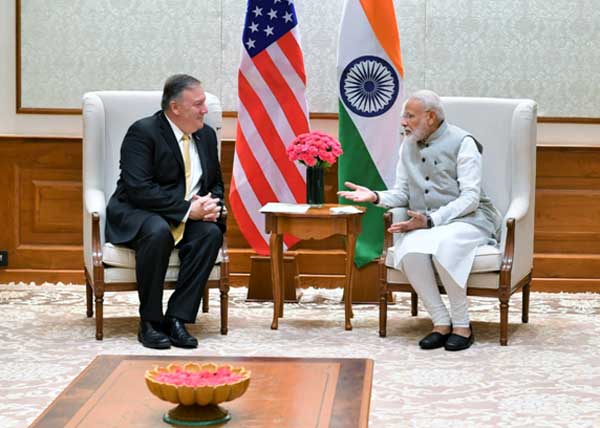 The third Indo-US 2+2 Dialogue is likely to take place at New Delhi on October 26-27. The Indian side will be led by External Affairs Minister S Jaishankar and Defence Minister Rajnath Singh while the US will be represented by Secretary of State Mike Pompeo and Defence Secretary Mark Esper. Much has happened in the Indo-Pacific after China biologically bombed the world with the Wuhan Virus, some of the events being:

The forthcoming Indo-US 2+2 Dialogue will be held in backdrop of the India-China standoff with multiple the ministerial, diplomatic and military level talks having remaining inconclusive. The key focus will likely be on a peaceful and prosperous Indo-Pacific region, freedom of navigation and global commons, strategic defence cooperation, trade, connectivity, enhancing supply chain structures, counter-terrorism, cooperation in combating COVID-19 and strategic issues like Quad, Afghanistan, China’s aggressive moves, India’s neighnbourhood and other bilateral issues.

Both countries are likely to ink the Basic Exchange and Cooperation Agreement (BECA) which is last of the foundational pacts that US wanted India to sign. BECA will enable India to avail US expertise on geospatial intelligence and sharpen the accuracy of weapons and automated hardware systems used for military purposes. The Maritime Information Sharing Technical Arrangement (MISTA) too may be signed during this meeting, which will make information and importantly, intelligence sharing much easier.

India and the US have already signed the key US foundational pacts of General Security Of Military Information Agreement (GSOMIA) in 2002, Logistics Exchange Memorandum Agreement (LEMOA) in 2016 and Communications Compatibility and Security Arrangement (COMCASA) in 2018. In December 2019, both sides signed the Industrial Security Annex (ISA) to the India-US General Security of Military Information Agreement (GSOMIA) that eased transfer of high-level technology from the US to India and safeguarding of classified military information. The ISA also seeks to ease participation of American defence firms in ‘Make in India’ projects via the India-US Defence Technology and Trade Initiative (DTTI) that was established in 2012.

China has mobilized PLA along the entire Line of Actual Control (LAC), made aggressive moves in East China Sea (ESC) and South China Sea (SCS),  aggressive maneuvers against Taiwan, ruthless actions in Hong Kong and economic intimidation of multiple nations battling the pandemic. China has been fast expanding military and economic influence in the Indo-Pacific region, triggering concern in various countries of the region and beyond. In this context, Sri Lanka appears drawn firmly by China in its strategic sphere which should be a cause of concern. It is because of this that Mike Pompeo is visiting Sri Lanka after the 2+2 dialogue. Sri Lanka  will be an important addition to the Quad but persuading the Sri Lankan President to agree may not be easy because of Chinese pressure.

According to Mukesh Aghi, President and CEO of US-India Strategic Partnership Forum, “Because of China’s aggression globally, including the LAC incident with India, there is now a sense of urgency between both sides (India and the US) to coordinate and bring in momentum in the defence partnership, by way of more procurements. And this momentum has to be built now. This will be the focus even for the new administration that comes in. The US now wants to align with India, and the LAC incident just accelerated that.” India has procured from the US, Apache, Chinook and MH-60 Romeo Seahawk helicopters, M777 Howitzer guns, and Super Hercules C-130J military transport planes among other weapons and weapon platforms. Several other procurement too are in the pipeline, with India now keen to purchase the Medium-Altitude Long-Endurance (MALE) armed Predator-B drone and other high-tech weapons. What Mukesh Aghi says is right but the relationship needs to go far beyond defence procurements.

A recently released Pentagon report says China has been using “coercive” tactics in pursuit of territorial and maritime claims in the South and East China Seas, as well as along its border with India and Bhutan, according to a Pentagon report. But despite what the Trump administration and Pentagon say, there is little chance of China correcting its rogue behavior. Speaking to media recently Mike Pompeo had said that the entire world is now united against China’s belligerence and its unfair practices, adding that nations like India, Australia, Japan, and South Korea are pushing back against China’s expansionist policies and aggressive behaviour in the Indo-Pacific region, and that all the nations that China encompasses as political and military targets with its expansionist policies and border skirmishes, as in the case of India, have united with the US. But how well the response to China is coordinated and in what time frame will be crucial because time is at a premium.

Finally, the world, especially the US and India must understand that in order to effectively checkmate the evil juggernaut of Xi Jinping and China’s Communist Party, balkanizing China and Pakistan are essential, the process for which must begin through means other than conventional. Earlier the China-Pakistan Economic Corridor is rendered ineffective the better. All this obviously must be covert and cannot be discussed in open forum.