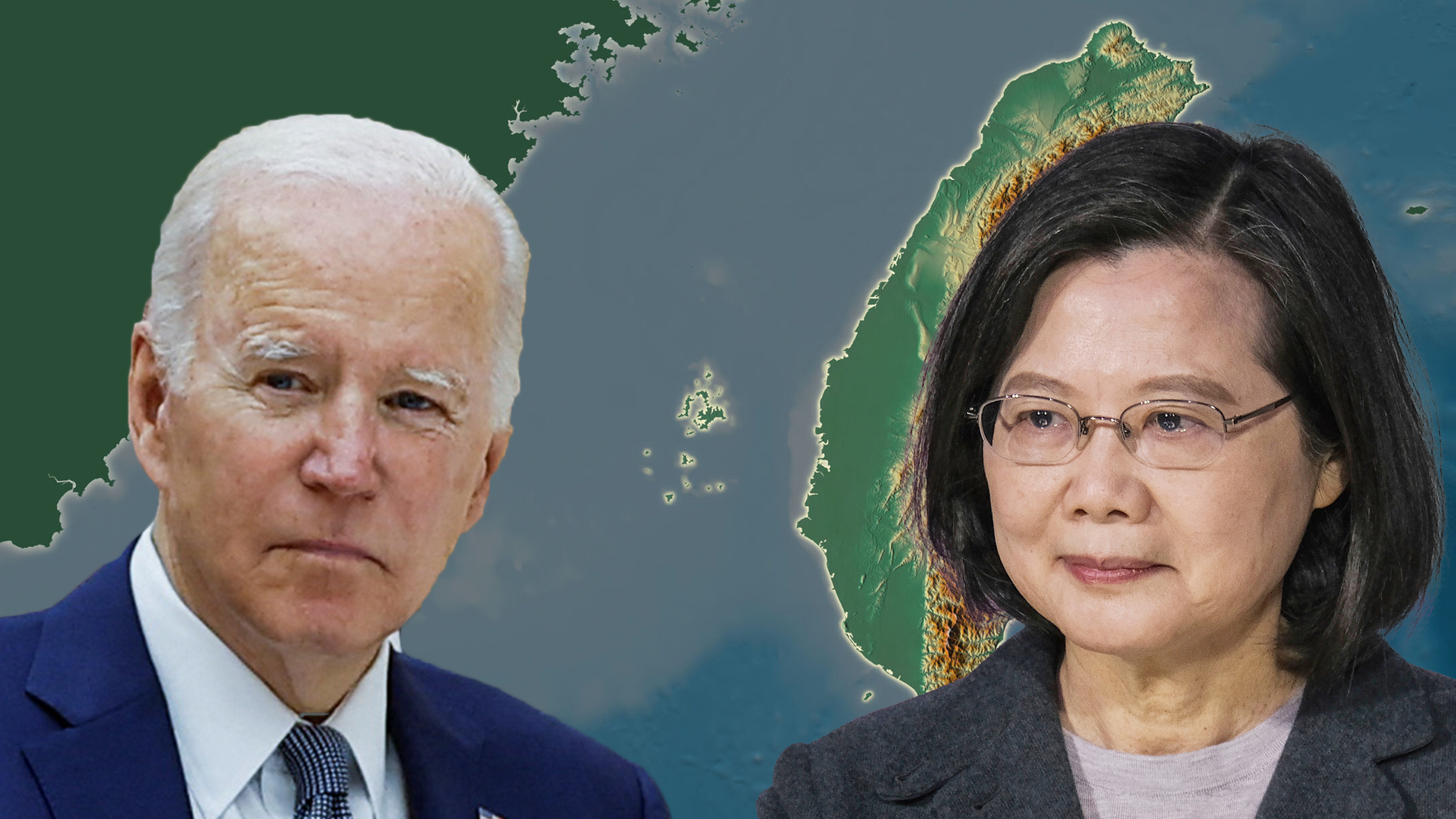 The Joe Biden Administration played its Taiwan Card through Nancy Pelosi’s visiting Taipei. American and Chinese posturing and display of perceived technological superiority has followed thereafter. The Biden administration wants Taiwan to become Ukraine of the Indo-Pacific albeit their secret desire would be for India to become Ukraine-like which would suit American interests better – possibly also enable US troop deployment in India?

After Pelosi, a US Congressional delegation visited Taiwan. It is possible that Joe Biden may also send the First Lady to visit Taiwan – the way it happened in Ukraine. The US has approved potential sale of military technical assistance to Taiwan worth an estimated $108 million. The US and Taiwan are slated to begin negotiations on a bilateral trade initiative, with the talks beginning this fall according to the office of the US Trade Representative.

China has announced an end to its military drills surrounding Taiwan but has said that further training and war preparations will continue. This announcement came shortly after it issued a White Paper on Taiwan reaffirming its commitment to use force against Taiwan if it cannot take control of Taiwan through peaceful means.

The US had deployed four warships, including the aircraft carrier USS Ronald Reagan, East of Taiwan during Pelosi’s visit to Taiwan. USS Ronald Reagan had transited the South China Sea and positioned itself in the Philippines Sea. At that point of time, Taiwanese media reported that a Chinese missile destroyer had appeared off the coast of Lanyu, Orchard Island.

But China went berserk after Pelosi’s visit and for the first time held military exercises with live-firing surrounding Taiwan from all sides. China’s J-20 stealth fighters participated in these exercises for the very first time. Taiwan’s Ministry of National Defence reported that China had deployed 20 aircraft and 14 battleships in the vicinity of Taiwan on the third day of China’s massive military drills.

Chinese aircraft and warships have been breaching Taiwan’s ADIZ from time to time even before Pelosi’s visit. Taipei views the PLA’s recent military exercises surrounding Taiwan as a possible rehearsal for an invasion of Taiwan.  Taiwan has also exercised its defence forces with live-firing drills.

The US has positioned B-52 stealth bombers in Australia and Germany announced it will be sending fighter jets to Australia. Australia is holding Exercise ‘Pitch Black’ from August 29 to September 8, 2022, in which 17 nations including India are participating. The exercise is to focus on “large force employment warfare” which will witness participation of some 100 aircraft and 2500 military personnel; an obvious signal to China.

The US has finished testing its new Long-Range Discrimination Radar (LRDR) in Alaska against ICBMs reportedly to fend off potential nuclear attack by North Korea (and Russia-China?). Deployment of the LRDR is to be completed “within months” for constant surveillance of Space and the Indo-Pacific. But its capability to deal with hypersonics is unclear though both Russia and China are perceived to be ahead of the US in hypersonics.

Numerically China has the largest navy in the world.  China’s new indigenous electronic warfare (EW) and armed reconnaissance drone FH-195  completed testing in July this year, With an endurance of more than 24 hours, it can carry 250 kg plus multiple mission payloads. The FH-195 can be paired with a satellite communication system for long-range combat missions. With four weapon hard-points, its weaponry includes the FT-8C laser-guided missile and there is speculation it can fire anti-radiation missiles also. The FH-97 can carry FH-901 loitering munition to conduct rapid and precise attacks on sensitive enemy targets. Analysts believe swarm attacks by small EW drones would disrupt radio, radar, and cellular communications of US forces integrated operations relying on data networks.

During a China-Taiwan military confrontation, Chinese Su-35 fighter jets, equipped with long-range air-to-air missiles, are said to have prompted Taiwan’s F-16 pilots to retreat.  The Su-35s fighters’ onboard electronic warfare systems allegedly blinded the radar of the Taiwanese J-16 fighter aircraft. The Su-35 is outfitted with a Russian airborne EW system that keeps a database of all enemy radar emissions, which can be shared with all Su-35 pilots.

Aside from reiterating possible use of force to integrate Taiwan with mainland China, the recently issued White Paper by China blames Taiwan’s ruling Democratic Progressive Party (PDP) for leaning towards independence. The paper calls reunification a historic mission and says “never before have we been so close to, confident in, and capable of achieving the goal of national rejuvenation.”

On face value, the situation appears to be back to what it was before Pelosi’s visit – at least in the appreciation of Washington? Therefore, the Biden administration will likely continue poking China, seeing Beijing is wary of confronting the US and its allies. The US is also banking on not suffering any attacks on the US mainland (just as in the Ukraine conflict) or much loss to its troops deployed abroad. US troop presence in Taiwan was raised from 20 to 30 in December 2021.

China has successfully militarized the first island chain including fully developing three new artificial islands stationing PLA garrisons. China’s obsession for integrating Taiwan into the mainland goes beyond reasons of ego or the urge to take control of Taiwan’s semiconductor industry, as some believe. But China’s strategic constraint is lack of deep waters for housing submarines and their stealthily move into the Pacific Ocean, whereas capture of Taiwan would provide this capability to China.

The US appears sanguine that China ‘dare not’ attack Taiwan especially with the economic woes that Chinese President Xi Jinping faces in run up to the 20th Congress of the Chinese Communist Party (CCP), the date for which has not been announced, and which could be postponed by the CCP no matter what the internal situation.

During the recent PLA drills surrounding Taiwan, one Chinese task force was only 20 km from Taiwan, a distance that the J-20 can cover less than 30 seconds. The question is if China does invade Taiwan, without attacking US forces, will the US ‘dare’ to intervene, and to what extent considering that escalation could involve the USFJ, USFK and mainland US? Or is it that the US will let Taiwan (one sixteenth the size of Ukraine) let Taiwan fight it out? Despite a negative population growth rate, the Chinese regime would have no inhibitions about suffering a million odd casualties but with similar casualties the US administration would be in crisis.

The region remains a powder keg which could get ignited with the Biden administration’s brinkmanship to retrieve some prestige from the Afghanistan debacle and now Ukraine. The forthcoming G-20 meet in Bali during November will be keenly watched with the Chinese, Russian and American presidents slated to attend. Thailand has also indicated efforts to arrange a Biden-Putin meeting on the sidelines.

The G-20 meet is an opportunity for Biden to diffuse the situation. But it is certain that Xi will give no indication of his intentions and will light the fuse at the time when considered opportune. For a long time Chinese participants in international seminars have been saying that the US should get out of the region. Both the US and China would not want to directly fight each other but when the fire is lighted, the wildfires tend to go out of control. The US and the West know this more than anyone else in the current setting.