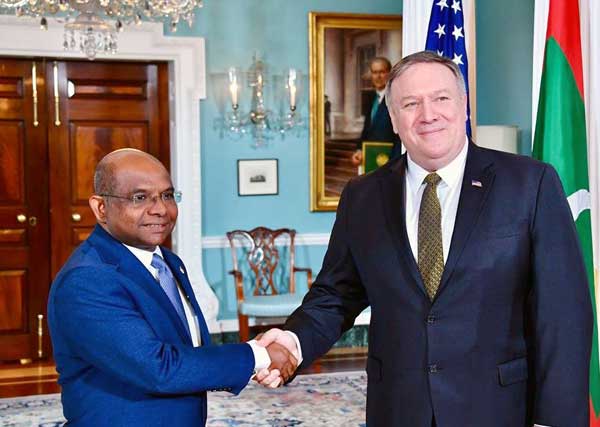 During the recent visit to the US by Maldives Defence Minister Mariya Didi, both countries US signed a ‘Framework for US-Maldives Defence and Security Relationship’ on September 10, 2020. The Framework sets forth both countries’ intent to deepen engagement and cooperation in support of maintaining peace and security in the Indian Ocean, and marks an important step forward in the defence partnership.

Both sides agreed to work toward scheduling the first Defence and Security Dialogue and reiterated their commitment to a free and open Indo-Pacific that promotes the security and prosperity of all nations in the region.

US established diplomatic relations with Maldives in 1966 when latter got independence from UK. Currently the US Ambassador to Sri Lanka Alaina B Teplitz is accredited to Maldives as Ambassador.  Maldives Permanent Representative to the UN is also accredited as Ambassador to the. US Maldives has a trade and investment framework agreement with the US and both countries have been holding periodic meetings since October 2014.

The US partners with Maldives to strengthen environmental resilience, implement economic and democratic reforms, and build a robust civil society. USAID programs focus on protecting the environment, augmenting democratic governance, and strengthening public financial management. US committed nearly $10 million in Economic Support Funds during visit of Maldivian Foreign Minister Shahid to Washington in February 2019. This year US has provided Maldives $2 million in assistance to combat COVID-19. In addition, US is also providing $7 million to Maldives under the Bay of Bengal Initiative.

Located about 600 km off the southwest coast of India and 750 km southwest of Sri Lanka, Maldives consists of a double chain of 26 atolls spread over 90,000 sq km of territory. With its highest point only eight feet above sea level, it is one of the world’s most vulnerable countries to global climate change. Having a population of 3,40,000 people and 1,192 coral islands located on major East-West shipping lanes its geostrategic value lies in its location astride three of the most important Sea Lines of Communication (SLOCs) through which most of India’s trade and oil requirements pass, apart from its close proximity to India and Sri Lanka. Anchored along major international trade routes and productive fisheries, a peaceful and resilient Maldives is critical to maritime security and regional stability.

During the regime of President Abdulla Yameen (2013-2018) the Maldives government voluntarily plunged deep into China’s debt-trap; borrowing billions of dollars from Beijing and hired Chinese firms for infrastructure projects. In 2019, Yameen was convicted of money laundering and sentenced to five years in prison after facing allegations of awarding contracts including four major bridges connecting Male to island of Hulhumale and extension of the international airport to Chinese companies on inflated prices. Mercifully, the new government installed in November 2019 under President Ibrahim Mohamed Solih took stock of how much Maldives had regressed in China’s debt trap. Presently tourism, which is main industry of Maldives, has taken a battering because of COVID-19.

Signing of the US-Maldives Framework for Defence and Security Relationship indicates clear resolve of the Government of Maldives to get out of China’s clutches. Incidentally, the US had proposed signing a Status of Forces Agreement (SOFA) with the Maldives in 2013, which was eventually shelved by the Maldives government in the face of Indian disapproval. But geostrategic dynamics has changed hugely now with Chinese efforts to dominate the Indian Ocean Region (IOR).

Naturally, India has welcomed the US-Maldives Framework Agreement. This framework agreement is a pivotal change in foreign policy of Maldives indicating it is onboard the US-led Indo-Pacific concept; for a free and open Indo-Pacific in which all countries prosper side by side as sovereign, independent states.

India too also been strengthening its strategic ties with new government of Maldives. India is committed to a major connectivity project that would link Male City (through sea-bridges and causeways) to the three islands of Vilimale, Thilafushi, and Gulhifalhu. This high-profile connectivity project is expected to lighten the load from the overcrowded capital city which has no space to expand.  During a bilateral meeting between External Affairs Minister (EAM) S Jaishankar and Maldives Foreign Minister Abdulla Shahid through video-conference on August 14, 2020 Jaishankar had announced a financial package consisting of a grant of US$ 100 million and a new Line of Credit (LoC) of US$ 400 million for the ambitious Greater Malé Connectivity Project (GMCP).

Abdulla Shahid said in a statement that once completed, the project will be the single largest infrastructure in Maldives. In totality, the GMCP will be more than three times longer than the US$200 million China-Maldives Friendship Bridge completed during the Abdulla Yameen regime which has since been renamed ‘Sinamale Bridge’.

Recent years have witnessed increasing Chinese maritime assertiveness in the IOR. India has enhanced maritime relations with France, which considers itself an Indian Ocean power on the basis of French territories like Reunion Island in the region. The first virtual meeting of another trilateral group comprising India, France, and Australia, three Indian Ocean based powers, for cooperation in the Indo-Pacific region, was held recently.

The US-Maldives Framework Agreement is a counter to Chinese actions in the Maldives. But China will keep lurking in the shadows looking for more opportunities. China’s debt-trap policy has attracted concerns from around the world including the West. China has been systematically saddling countries of Asia and beyond with unsustainable debts while expanding its sphere of influence by extracting repayments in financial as well as strategic terms. China is also using this strategy to beef up its ‘string of pearls’ around India in order to limit India strategically.

Maldives remains in the crosshairs of China who wants to subsume it as a focal point in its Belt and Road Initiative (BRI).

The economy of Maldives is in perilous state. Visiting India in December 2019, Mohamed Nasheed, Speaker of the People’s Majlis (Parliament) of Maldives disclosed that Maldives owed China a whopping $3.5 billion in loans; according to China, the loan was $1.5 billion but that was only the government-to-government loan. Once the private loans and sovereign guarantees are also factored in, the amount is $3.5 billion.

Nasheed said GDP of Maldives is about $5 billion but in 2022, the country will have to pay China $700 million. He also added that the Free Trade Agreement (FTA) which the previous Yameen government had agreed to with China couldn’t possible go ahead, saying, “We have no trade balance with China. How can an FTA be in our favour then?” He noted that unless South Asia was careful, China would become the new imperial power.

In a recent development, China’s Exim bank has asked Maldives to repay US$10 million loan, which is “part” of the loan given to Ahmed Shyam, an ally of former president Yameen. The US$127 million loan was given under sovereign guarantee by Maldives and now China is asking Maldives to pay an unpaid installment. Maldives, therefore, remains effectively debt-trapped by China. One possible way to help Maldives could be for someone to buy one or a pair out of the over 1000 uninhabited islands of the country.

With Diego Garcia over 1,172 km away from Maldives can the US or another country/conglomerate do so? If not, China may do so to establish a so called ‘strategic support base, which it has been planning past decades.