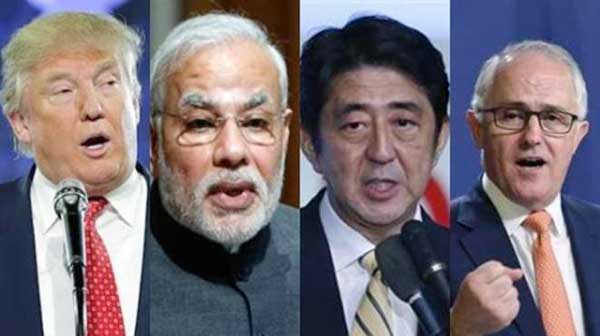 The second quadrilateral meeting of US, India, Japan and Australia was held at Tokyo on October 6, 2020, first such meet having been held in New York in September 2019. The second meeting was in backdrop of the China virus battering the world and China’s all around aggressive moves including the aggression in Ladakh, India and the resultant standoff. No joint statement could be issued because of lack of consensus to name China for the China virus and aggression – much to China’s glee. US Secretary of State Mike Pompeo was the only one to directly accuse China for adventurism in South China Sea, East China Sea, Mekong, Taiwan Straits and the Himalayas alluding to the current India-China standoff. Pompeo called for collaboration against Chinese Communist Party’s exploitation, corruption and coercion by saying, “We couldn’t have imagined the pandemic that came from Wuhan. That crisis was made infinitely worse by the Chinese Communist Party’s cover up.”

As part of his opening remarks, External Affairs Minister S Jaishankar said, “As vibrant and pluralistic democracies with shared values, our nations have collectively affirmed the importance of maintaining a free, open and inclusive Indo-Pacific. We remain committed to upholding the rules-based international order, underpinned by the rule of law, transparency, freedom of navigation in the international seas, respect for territorial integrity and sovereignty and peaceful resolution of disputes.” Jaishankar also referred to COVID-19 having brought global transformation, demonstrating need for like-minded countries to coordinate responses to meet the challenges.

Australian Foreign Minister Marise Payne spoke of Quad signaling steadfast commitment to promote an open, inclusive, and resilient Indo-Pacific, belief in a region governed by rules not power and resolution of disputes according to international law.  He also stressed on belief in regional security and recovery from COVID-19 that supports sovereign choices for the countries of the Indo-Pacific, adding, “Today, we will exchange strategic assessments and agree to actions to support our aligned interests in areas including health cooperation, maritime security, critical minerals and technologies, countering disinformation, and humanitarian assistance”. Japanese Foreign Minister Toshimitsu Motegi stated that he looks forward to a very successful meeting and an even more powerful partnership between the four countries. EAM Jaishankar also had bilateral meetings with his US, Australian and Japanese counterparts. The four foreign ministers also met the new Japanese Prime Minister Yoshihide Suga.

Views that emerged from the Quad meeting and subsequent statements included:  India and Australia mentioned cooperation in access to COVID-19 vaccines while others did not; Japan named North Korea and the East and South China Seas as regional issues and noted positive role of extra regional powers in maintaining a free and open Indo-Pacific; US and Australia mentioned need for collaboration to counter disinformation; Australia mentioned the need for regional powers to conform to UNCLOS and made reference to rules and norms in the region, and; US noted that the ministers “reviewed recent strategic developments across the Indo-Pacific.” Similarly, the Indian readout too mentioned that “regional issues of mutual interest” were discussed, albeit India omitted any reference to cyber-security and data issues.

It is common knowledge that Quad came up because of the increasing aggressiveness of China. To this, there were expectations that the second meeting of the Quad in Tokyo would come up with a forceful signal to China but ironically this did not happen.  Post the Quad meeting, the statement issued by the Ministry of External Affairs (MEA) in New Delhi tacitly acknowledged that the four nations were yet to reconcile divergence in views about dealing with China in the Indo-Pacific region. It noted that the External Affairs External Affairs Minister, the US Secretary of State and the Foreign Ministers of Japan and Australia had “highlighted” during the meeting “their readiness to work towards realizing a common vision for the Indo-Pacific.” This clearly means that the Quad has a very long way to go if it is to provide a meaningful counter to China’s unethical aggression and domination in the Indo-Pacific notwithstanding the fact that the Quad members have agreed to use each other’s bases.

Beijing has gone well beyond the stage of being bothered about indirect references at multilateral forums. Witness how China has been using coercion (by buying out Cambodia and Laos) over past years to deter even ASEAN from naming China despite its aggression in Western Pacific. But none of the Quad members are debt trapped by China even though economic interdependence remains. But so is the case in US-China relations. Moreover, Quad is not a formal military alliance. So what was stopping a joint statement naming China especially when the very basis of Quad is Chinese all around aggression? What worse could have China done from what it has already done? The surprising part is that Australia which was one of the first countries to openly blame China for releasing the virus from Wuhan and hiding the fact, omitted blaming China during the Quad meeting.

The Quad meeting in Tokyo should have been seized as a strategic opportunity to chase away the ghosts of the fear of calling what China truly is. For that matter, what can China do if the Quad collectively makes reference to Taiwan as an independent country, which Individual Quad may find difficult to do? Can the US propose Taiwan joining Quad to at least shock Beijing? This meeting could have also discussed expanding the Quad. Japanese PM Yoshihide Suga’s first overseas visit to Vietnam and Indonesia in mod-October indicates Tokyo’s security and other concerns. Could these countries and other with common concerns be included in the Quad?

The Quad could meet on biannual basis and as mentioned in these columns earlier, Quad could include a classified military dialogue to discuss and coordinating issues like:  future Chinese actions contrary to aims of Quad; Quad response on land, sea, air and space; targets in mainland China that can be targeted using long-range weapons and missiles; response to use of tactical nukes by China; China-Pakistan biological warfare capability and measure to mitigate it; collective use of cyber and EMP capability in responding to Chinese attack, blockading Chinese militarization of Indian Ocean Region (IOR) and; waging the Quad-version of unrestricted war on China as quid pro quo rather than only ‘reacting’ to Chinese aggression; eventual being to balkanize China.

Finally, tongue-in-cheek statement like at the Quad meet in Tokyo will only embolden Beijing. China will continue in the same vein riding on its economic clout and military muscle even though latter has yet to catch up with the US. But China banks on western uncertainties to act when it tests their redlines. After all this is how China has successfully militarized the seas within its 9-dash line. The Quad will, therefore, need to get its act together before China militarizes the Indian Ocean Region similarly.