North Korea and the musings in Capitol Hill 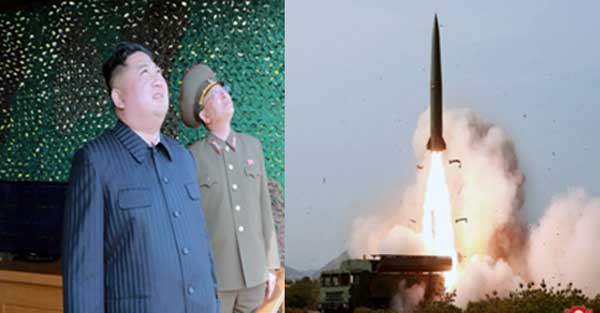 Soon after Kim Jong-un, DPRK’s Supreme Leader returned from his first meeting with Russian President Vladimir Putin, DPRK fired two short-range ballistic missiles within the space of a week. The first missile was fired on May 4 and two on May 9. The missiles fired from Kusong City, with launch overseen by Kim, travelled 420 km and 270 km towards the sea in the east. DPRK did not reveal the type of these missiles, with state media terming them only as short-range projectiles.

However, a western view is that these short-range missiles can better evade missile defence, and they resemble the Russian ‘Iskander’, which can carry nuclear warheads. The missile launched on May 4 was the first detected after November 2017, when DPRK had launched an ICBM capable of hitting the US.

The earlier meetings between Kim Jong-un and US President Donald Trump in Singapore and Vietnam ended without resolution, with Trump demanding denuclearization and Kim wanting major relief in sanctions. Also, while Trump wants DPRK to give up nuclear weapons and its nuclear program, Kim talks of denuclearization of the ‘Korean Peninsula’ which perhaps refers to clandestine nuclear capability of ROK and possibly even hints at nuclear weapons on board US-UK vessels visiting or stationed in ROK.

The thinking in Capitol Hill appeasr that Kim wants another round of Trump-Kim talks early, as well as easing of sanctions.  Post North Korean missile launches on May 9, Trump said, “I know they (North Korea) want to negotiate… but I don’t think they are ready to negotiate. We’ll see what happens. Nobody’s happy about it”, adding that the authorities were looking at it very seriously.

Pyongyang-Moscow diplomatic relations were established in October 1948. 80% of bilateral trade between them consists of cooperation and investment, including in Siberia and Russia’s Far East. However, in December 2013, Russia forbade technical assistance to Pyongyang in ballistic missiles, instituted inspection for DPRK naval vessels visiting Russia and vigilance in dealing with DPRK diplomats; in line with UNSC Resolution 2087. But in May 2014, Putin ratified an agreement to write off 90% of DPRK’s debts, which were estimated to be around $11 billion. In May 2016, Russia ordered its banks to halt financial dealings with North Korea, in line with another UNSC resolution of March 2016. Russia-North Korea trade in 2018 was $34 million, a 56% decrease from 2017.

Kim Jong-un had accepted an invitation to visit Russia in mid-May 2015 but finally undertook the visit four years later in April 2019 to meet Putin. During the Kim-Putin summit, Putin reiterated importance of denuclearization and in the joint press briefing afterwards said solutions should be available to avoid confrontation.

Behind the sudden visit by Kim to Moscow to meet Putin is an obvious prod by Chinese President Xi Jinping, as a signal to Washington, in backdrop heightening US-China trade war. The US has consistently believed China would help them denuclearize DPRK, whereas DPRK from day one is one of the two nuclear talons of China; the other being Pakistan.

During the Trump-Kim Singapore meet in June 2018, Trump made a stunning statement at the news conference that he was halting annual US-ROK military drills – and wants to remove 28,500 US troops in ROK as deterrent against DPRK. Getting home, Trump was euphoric in tweeting that the issue of denuclearizing DPRK had been solved. But then evidence emerged of DPRK going ahead with its nuclear program.

The second Trump-Kim summit at Hanoi in February 2019 collapsed abruptly because DPRK offered to begin dismantling its Yongbyon nuclear facility as a ‘first step’ whereas Trump wanted other DPRK nuclear facilities also included. According to US media, DPRK offered to “begin” dismantling the Yongbyon nuclear facility provided “all sanctions” were lifted. This was denied by DPRK Foreign Minister telling reporters that DPRK sought only partial lifting of sanctions (5 out of 11 UN sanctions) unrelated to military, in response to written pledge of permanently ending nuclear and long-range missile tests.

Pyongyang’s escalation of tensions is no doubt another attempt to seek relief from sanctions and engage the US. This is not the first time that Kim Jong-un has resorted to such tactics though it could also be instigated by the recent US-ROK joint military exercise despite Trump’s announcement at Singapore in June 2018 of suspending annual US-ROK military drills. But it would be naïve to think Kim is upping the ante on his own; without Chinese advice.  One reason UNSC sanctions against DPRK have not been fully effective is China.

Not only does Beijing continue to support DPRK’s call for sanctions relief, the  annual report of the US-China Economic and Security Review Commission released in November 2018 indicated  Chinese financial institutions, businesses, and officials involved in trading with DPRK could be subject to future sanctions; China appeared to enforce sanctions on DPRK in 2017 and early 2018 but  appeared to have relaxed since a thaw in relations between China and North Korea as DPRK (China’s long-time ally) began engaging the US.

DPRK launched the two-short range ballistic missiles on May 9 concurrent to presence of a US envoy in ROK to discuss revival of the stalled denuclearization negotiations. Post these missile launches, the US seized a North Korean ship that was flouting sanctions by carrying banned exports of coal. There is considerable activity at DPRK’s Sohae and Sanumdong launch sites and a large old base  appears to have been designed to hide and protect DPRK’s growing arsenal of long-range missiles. There are also indications that DPRK is either preparing for the launch of a satellite launch vehicle or building such narrative for leveraging continuation of talks with the US.

Given that the US would not want DPRK to resume ICBM testing to improve its capability in targeting mainland America, another Trump-Kim summit may happen in coming months. Arriving at an amicable solution for initiating step-by-step approach for denuclearization and begin implementation may be attempted, which would assist Trump seeking his second presidential term. But would China-DPRK be amenable to this?

Despite the escalating US-China trade war, China appears itching for instigating the US to the point of conflict in its quest for global supremacy, backed by its economic and military muscle. China, also irked with growing US-Taiwan ties, would want conflict on foreign turf; using countries like DPRK and Pakistan to hurt US interests; Chinese stratagem (one among 36) to ‘Kill With a Borrowed Knife’.

It is quite likely that Western Pacific could see escalation of tensions as the US-Iran confrontation heats up. With Saudi tankers and a Norwegian ship sabotaged in the Gulf, fireworks may not be too far off. China may use conflict in the Gulf to orchestrate and escalate incidents in the South China Sea to test US resolve. Resolution of denuclearization of DPRK looks very distant indeed, if at all. But would the wise men of Capitol Hill acknowledge that China, which has been actively helping DPRK despite UN sanctions, would not want North Korea to denuclearize?