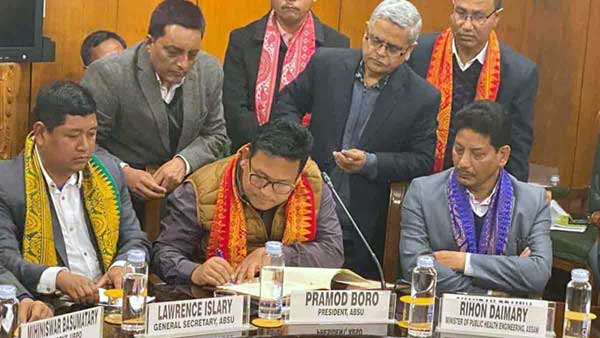 Signing of the Bodo Accord on January 23 between the Government of India and Bodos is a significant step that would contribute greatly towards ushering peace in the turbulent northeast. The new Bodo Accord was signed with all the rebel factions: the National Democratic Front of Bodoland (NDFB), the All Bodo Students’ Union (ABSU), and a civil society body, United Bodo People’s Organisation (UBPO). At the packed Guwahati Medical College and Hospital Auditorium, 1615 cadres of National Democratic Front of Bodoland laid down their arms.

This is the third accord with the Bodos; earlier two being the 1993 Bodoland Autonomous Council Accord and the 2003 Accord with the rebel Bodo Liberation Tigers. But the unique feature of this third time accord is that for the first time all factions of Bodos are signatory to the accord, significantly also the frontline ABSU, with a joint commitment to end violence and strive for progress and development.

The Memorandum of Settlement (MoS) renames the four contiguous districts of Kokrajhar, Chirang, Udalguri and Baksa from Bodo Territorial Area Districts (BTAD) to Bodo Territorial Region (BTR), promising reorganization of areas under the council by a commission, increasing powers of the BTC including increase in seats from 40 to 60 and also looking after interests Bodos living outside the BTC area through a autonomous council.

Post the accord, Promode Bodo, President of ABSU stated, “I am satisfied. It will depend on approach of the government and its sincerity in implementing the promises and clauses of accord,” he said adding the decision to discontinue the movement for a separate state will be only taken once the ABSU meets in a special session later next month”.

Under the accord, general amnesty is to be given to Bodo cadres involved in non-heinous crimes and consideration on case-to-case basis for those involved in heinous offences. The Assam Government is reportedly developing a new model of rehabilitation for the NDFB cadres, with the aim that the surrendered cadres should not go back to any anti-social activity because of lack of opportunity.

A Bodo-Kachari Welfare Council is to be set up for focused development’ of Bodo villages located outside the Bodo Council area. Bodo language in Devnagri script will be associate official language of Assam. Measures to protect Bodo culture, higher and technical education for Bodos are also part of the new accord.

Of the 60 seats (increased from 40) in the BTR Council, 16 are reportedly open in which non-tribals can also contest though these are not reserved for non-tribals. There will also be six nominated members in the BTR Council, including two women members and two from unrepresented communities. This is being portrayed as ample reservations for non-Bodos under the new accord has. But this may not necessarily be the true picture albeit the accord improves electoral prospects of the BJP in Bodo area considerably.

The success of the new accord will depend on multiple factors, mainly its execution, which is relevant to all accords. Assam so far did not have an effective rehabilitation program. How the new rehabilitation package is worked out and implemented will matter. How the government handles cases of Bodo cadres accused of heinous crimes too will be important. Such cadres would wield certain amount of influence on Bodo youth.

At the same time since their violent acts were against the non-Bodos, letting them off lightly could lead to dissatisfaction amongst non-Bodos. The links of Bodos with insurgent outfits like the ULFA (I) are also relevant. It may be recalled that ULFA and Bodos both were running camps in Bhutan, till the Royal Bhutan Army attacked and evicted them.

Some of these cadres fled to China and were helped by the Chinese. When ULFA militant leader Paresh Barua was booted out from Bangladesh, he along with some ULFA cadres was provided asylum at Ruli in China under the Chinese intelligence where he remains anchored and has been active in Myanmar also.

With the new Bodo Accord, Assam Chief Minister Sarbananda Sonowal has appealed to Paresh Barua to join the peace process. The appeal was made a day after ULFA (I) claimed to have injured four security personnel in an exchange of fire in Changlang District of Arunachal Pradesh. Sonowal stated, “We welcome Paresh Barua and his group to join the peace process. Let us work together to bring permanent peace to Assam. The recent peace agreement with the NDFB factions has given rise to positive thinking among the people. ULFA has a big role in bringing peace here. if they come forward for peace talks, the government will respond in a dignified manner”.

However, the response from Paresh Barua is negative, which is on expected lines because of China’s influence. Baruah has told media, “If Modi is determined, all we need from him is a written assurance that only sovereignty will be discussed and we will come for talks. We will hold the discussion in Assam, and not on foreign soil”. ULFA Chairman Arabinda Rajkhowa had joined the peace process almost a decade back, but Paresh Barua has refused to do so.

Prime Minister Narendra Modi visited Assam on February 7, 2020 and addressed a mass rally at Kokrajhar to a tumultuous welcome by Bodos. This was his first visit to Assam after the region erupted in anti-CAA protests. Earlier his proposed informal summit with Japanese Prime Minister Shinjo Abe in Guwahati too had to be called off because of the agitation.

Addressing the gathering at Kokrajhar, Modi said, “You all have contributed to the Bodo Accord. The entire nation is congratulating you. You all paved the way for permanent peace in the region.” He said earlier there were about 1000 killings in the Northeast due to extremism but today, on average, the situation is normal and peaceful.

He said the government is now trying to implement Clause 6 of the Assam Accord, adding, “I want to assure the people of Assam that after the Committee submits its report, the Central Government will act on it swiftly. Under the Accord, Rs 1500 crore will be given as a special developmental package to help the Bodos. Protection of every right, culture, language, and development will be ensured”. Modi said, “This is a new opportunity and a new dawn for Assam and the entire Northeast to welcome the 21st century”.

There is no denying that China remains a major factor in instability in our northeast because of an unsettled border with India and because of its illegal claims over Arunachal Pradesh. The China-Myanmar Economic Corridor (CMEC) will see the influx of PLA in our neigbourhood – both covert and overt.

Chinese intelligence has been linked with the Myanmar-based Arakan Rohigya Salvation Army (ARSA) which is headed by a Pakistani national, as also the United Liberation Front of West and Southeast Asia (UIFWSEA) which was brokered together by the Chinese intelligence in 2015. Ironically, India has yet to establish effective deterrence vis-à-vis China and Pakistan at the sub-conventional level.

The reference by some Bodo leaders that the call for a separate state can come up in future too remains a question mark. This may be played upon by China in conjunction ULFA (I) and other proxies.

Finally, the new Bodo Accord certainly is an excellent step towards ushering peace in the northeast. Mass surrender by 1615 cadres indicates sincere  goodwill. Managing the China-Pakistan interference, Bodo and non-Bodo relations in the region, manner of implantation of the accord and speedy and meaningful development of the northeast region will remain challenges that will need to be addressed on continuous basis.