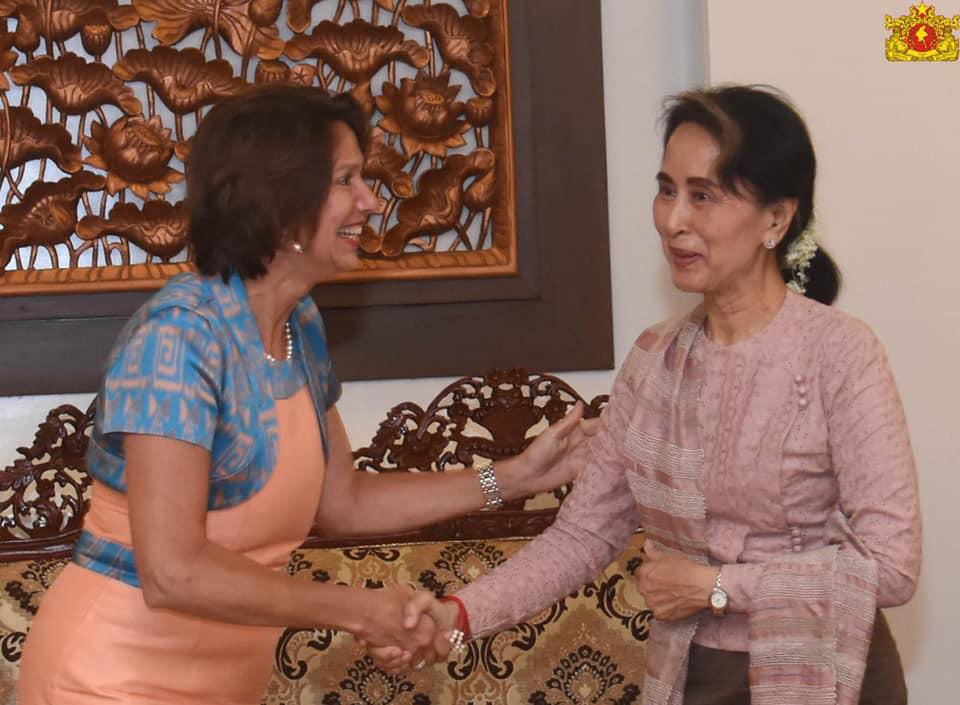 Myanmar is in the news practically every day but for wrong reasons. The UN Special Envoy on Myanmar has warned that the ground situation will only worsen and has called upon the UNSC to consider all available tools to take collective action and do what is right, what the people of Myanmar deserve and prevent a multi-dimensional catastrophe in the heart of Asia. Myanmar’s ambassador to the UN Kyaw Moe Tun in a media interview has said that China too is worried about the situation in Myanmar and that China has been helping the Myanmar military. He did not clarify whether China is behind military coup. China has wooed every government in Myanmar because of its own strategic interests. China is the biggest investor in Myanmar and the largest arms supplier to Pakistan, Bangladesh and Myanmar.

Aung San Suu Kyi, presently under detention, had backed the actions of the Myanmar military or Tatmadaw against the Rohingyas at the UN and UNHCR. Interestingly in June 2020, Brigadier General Zaw Min Tun, spokesperson of Tatmadaw had said that “one country” is arming the Arakan Army with sophisticated military technology. It is well known that the Arakan Rohingya Salvation Army (ARSA) is headed by a Pakistani national and the outfit is being armed and supported by China, Pakistan and Pakistan-based Lashkar-e-Taiba (LeT). China has always backed Myanmar, also insisting that seizure of power by the military is an internal affair of Myanmar. However, in addition to ARSA China has been arming other insurgent groups in Myanmar.

In early March 2021, China asked the Tatmadaw to protect the oil and gas pipelines following the emergence of anti-Chinese sentiment and protesters threatening to blow up the pipelines. Ground reports later indicated PLA troops and military trucks gathering in Jiegao, opposite the Shan State in Myanmar.  Taiwan media reported that Chinese troops were gathering to protect the natural gas pipeline. However, the 800-km twin pipeline project runs from Kyaukphyu in Rakhine State all the way to Shan State and beyond to China. Shan State is straddled by the United Wa State Army (UWSA) with some 30,000 full-and part-time fighters controlling towns along Myanmar’s borders with China and Thailand. China has armed UWSA with machine guns, shoulder-fired rockets, armored vehicles and missile-fitted attack helicopters.

Is the PLA mobilization on the border with Myanmar aimed at investing Myanmar at an opportune time in conjunction other Chinese proxies under guise of ‘assisting’ the Tatmadaw if the impending civil war goes intense? Is there a connection between PLA mobilization against Myanmar, aggression in Ladakh, Russian mobilization on the Ukraine border, China violating the Taiwan’s EEZ and Indonesian waters? Is China spilling a can of worms around to divert attention from something in the offing? China has denounced sanctions on Myanmar by the US, Canada, Britain and the European Union whether on trade or Tatmadaw generals.

Opinions about the situation in Myanmar are varied, depending upon: geographical proximity to Myanmar;  whether China and left leaning, and; championing democracy irrespective whether it is true democracy, autocratic or false – in some cases the remote always with the military, like in Pakistan. Above all, the warring groups in Myanmar are supported by geopolitical players under massive media blitz and accompanying propaganda. For the Myanmar military, the situation is fast becoming a quagmire.

Among the various groups and unions participating in the civil disobedience movement, the Committee Representing the National Parliament (CRPH), mostly made up of democratically elected but now ousted lawmakers has reached out to ethnic rebel groups for support. On March 29, the tripartite alliance of the Myanmar National Democratic Alliance Army, Ta’ang National Liberation Army and Arakan Army (AA) condemned the military’s crackdown and warned they would collaborate with other ethnic armed organizations and pro-democracy supporters. These groups are based along the Myanmar-China border and the AA also has considerable presence in northern Rakhine State.

Myanmar witnessed an upsurge in violence after the Karen National Liberation Army (KNLA), which has a strength of some 15,000 armed fighters and is the military branch of the Karen National Union (KNU), attacked a Tatmadaw base killing 10 soldiers and taking eight captive. The Tatmadaw retaliated with air strikes on the KNLA, sparking condemnation from governments around the world. Thousands of residents reportedly fled to safe areas. Same day the death toll in Myanmar rose to 114. Airstrikes on insurgent / terrorists outfits have been happening elsewhere around the world. In 1966, India used airpower against the Mizo National Front. In 2014, Pakistan’s Operation Zarb-e-Azb ground and air offensive in North Waziristan against terrorist outfits killed hundreds including women and children, and displaced some 1,00,000. There was little global condemnation.

The death toll in Myanmar has crossed the 550 mark,  which the Assistance Association for Political Prisoners (AAPP) feels may actually be higher. The General Strike Committee of Nationalities (GSCN) has called for ethnic minority forces to help protesters. But the Tatmadaw has reportedly also resorted to targeted killings, which has raised cries that they are following Mao’s dictum of “Power and Peace flows from the barrel of the gun”; in the process sorting out aspirations of the various ethnic groups like Karen, Chin, Arakan, Kachin, Kuki, Shanni, Ta’ang, Zomi, Shan and Wa by military means.

The violence in Myanmar is flooding India and Thailand with refugees. The Indian government has asked the states not to permit them but the India-Myanmar border is largely open. Ironically, little has been done to fully settle and demarcate it. The Mizoram Chief Minister has urged the Prime Minister to intervene and allow political asylum to refugees from Myanmar saying, “Myanmar areas bordering Mizoram are inhabited by Chin communities who are ethnically our Mizo brethren with whom we have been having close contacts throughout these years even before India became independent. Therefore Mizoram cannot remain indifferent to their suffering today. India cannot turn a blind eye to this humanitarian crisis unfolding right in front of us in our own backyard.” Already some 3,000 refugees from Myanmar have reportedly entered Mizoram post the military coup.

US President Joe Biden has been talking of rebuilding US relations with countries of south-east Asia and ASEAN and his recent national security guidance directives sets out the way forward. But in case of Myanmar, the Biden administration is in favour of isolating the country, whereas the recent minister-level meeting of BIMSTEC showed that engagement with Myanmar is vital rather than isolating it. Ironically, despite scores of armed insurgent groups in Myanmar, there has been no effort at international level to assist in national reconciliation – like in Afghanistan. Only China has been offering to mediate while holding the sub-conventional mandate over Myanmar.

The West may be hoping that a policy of chaos or continuing violence in Myanmar would help check Beijing’s influence. But that has not worked in Pakistan and Afghanistan. On the contrary, giving a freehand to China would imply greater human tragedies. The China-sponsored Maoist insurgency in Nepal resulted in the death of over 17,000 and internally displaced hundreds of thousands characterized by massacres, purges, summary executions, kidnappings and worst of crimes against humanity, not very different from what Mao Zhedong perpetrated on the Chinese population.

The military junta in Myanmar has declared a state of emergency for one year on February 1, 2021. Whether that would extend further only time will tell but certainly the military needs to be engaged pragmatically by the international community, India included. For India, the geostrategic significance of Myanmar is far greater than for the US or the West. Stability in Myanmar is vital and mere moralist opinions are not going to help. Power is the basis of upheaval in the world. The Tatmadaw has been enjoying 30 percent reserved seats in Parliament through the Constitution, which it feared Suu Kyi would amend. Try telling the Pakistan army to layoff and let democracy flourish in Pakistan.