Maldives – in eye of political storm 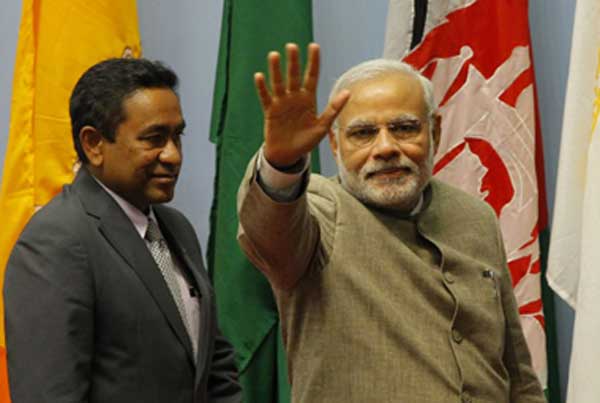 The need for political reconciliation has been in news with respect to Afghanistan for long, but happenings past two years and recent short emergency imposed in Maldives indicates Maldives needs it as much. In a move that surprised many Maldivians, President Abdulla Yameen arrested his deputy Ahmed Adeeb on a charge of high treason moments after his flight from Singapore landed at the international airport.

Maldives, with its geostrategic location and proximity to India, is vital to India’s maritime construct especially with the centre of gravity of global conflict veering towards the Indian Ocean…

The security forces said they have seized a large cache of weapons from a reef and defused a bomb in Malé. The defence minister and the police chief have been sacked and Adeeb’s supporters have been purged from top government positions. But amidst all this a US FBI investigating the blast has found no evidence of a bomb, raising questions whether the incident was orchestrated to remove Adeeb.

Adeeb was impeached after emergency was lifted but the requirement of political reconciliation is prime amongst the top leadership to include the present President Abdullah Yameen and former President Mohmmand Nasheed and their respective supporters which remains a flash point. In March this year, Nasheed was sentenced to 13 years in prison after being found guilty of unlawfully ordering the arrest of a judge during his time in office but according to UNHCR, Nasheed’s trial was politically motivated and flawed.

In September, UNHCR Chief Zeid Ra’ad Al-Hussein called for Nasheed’s release. He had also called for a review of criminal cases against several hundred of Nasheed’s supporters who were arrested during political protests.

Maldives, with its geostrategic location and proximity to India, is vital to India’s maritime construct especially with the centre of gravity of global conflict veering towards the Indian Ocean, its location is astride three of the most important Sea Lanes of Communications (SLOCs) through which most of India’s trade and oil requirements pass, apart from its close proximity to India and Sri Lanka and India’s enhanced strategic and commercial focus on the African continent.  It is well known that India assisted Maldives thwart a coup in 1988 to oust the then President Maumoon Abd al-Gayoom; successfully countering the coup initiated by a group of Maldivians led by Abdullah Luthufi. India and Maldives signed a bilateral treaty in 1949, reached an agreement in 1976 to demarcate their maritime boundary by adopting the median line principle.

What India is wary about is the fast paced radicalization that is sweeping across Maldives. Past decade plus youth from Maldives have been regularly going to Pakistan for arms and radical training under the LeT.

Coast Guards of both countries have been jointly exercising biannually to focus on maritime search and rescue, anti-piracy operations, humanitarian assistance and disaster relief, marine pollution response and the like. Such an exercise in October 2014 also saw the participation of the Sri Lankan Coast Guard. There are many more areas of defence cooperation between India and Maldives including large number of Maldivian officers undergoing military training and various courses in India.

In 2009, India and Maldives signed a Defence Pact to include: operational assistance by Indian Military and intelligence sharing; cooperation to bolster Maldivian security; India to set up radar network (10 x Coastal Surveillance Radar Stations) across the Maldives linked with Indian military surveillance systems; protection of the Maldives EEZ through cooperation in maritime surveillance and aerial mobility. India has also offered Maldives a fast attack naval craft to safeguard and augment its economic and strategic maritime assets. Both countries have initiated counter-terrorism mechanisms to thwart any future seaborne terror attacks on Indian soil largely based on continuous intelligence sharing.

However, what India is wary about is the fast paced radicalization that is sweeping across Maldives. Past decade plus youth from Maldives have been regularly going to Pakistan for arms and radical training under the LeT. Some 100 Maldives youth are reportedly fighting alongside ISIS in Iraq-Syria. Maldives has 1192 islands of which some 100 are tourist resorts that provide an industry worth $70-$100 billion attracting 80,000 tourists annually. Drugs started flowing in some years back (mostly by sea) with unemployed youth going to Pakistan for arms and terror training under LeT for past decade plus.

Attracting over 90,000 tourists annually and with 34,000 foreign employees, Maldives is ideal setting for terror groups like LeT and Al Qaeda. Significantly, one of the reasons for downfall of former President Nasheed was his reformist agenda. A large number of Maldivian youth are fighting along the ISIS in Middle East.

Sushma Swaraj assured Maldives that India will always be the net security provider to the Indian Ocean archipelago, stressing at the same time that it is also important to insulate both countries from trends towards radicalization and terrorism.

In wake of Vice President Adeeb’s arrest, the Maldives Parliament passed an anti-terrorism law on October 28 which is being dubbed draconian for curbing fundamental rights and rendering penal code redundant since the new law restricts constitutional rights upon arrest for terrorism suspects – including the right to remain silent and access to legal counsel.

The home minister will have powers to apply for a ‘monicon’ (monitoring and control) order to tag and intercept communications and conduct surveillance on terrorism suspects.

In October this year, External Affairs Minister Sushma Swaraj visited Maldives and co-chaired the 5th meeting of the India-Maldives Joint Commission with her Maldivian counterpart after a hiatus of 15 years to focus on cooperation in health, energy, defence sectors and other issues. She assured Maldives that India will always be the net security provider to the Indian Ocean archipelago, stressing at the same time that it is also important to insulate both countries from trends towards radicalization and terrorism.

The Joint Commission proposed establishment of a Joint Business Forum and suggested that an investment oriented forum be part of the calendar for 2016. The EAM also pointed out that the framework agreement of cooperation signed in November 2011, has empowered the joint commission further and also mandated them to discuss defence and security issues of mutual concern. Maldives apprised India of progress in its internal processes for joining the Agreement on Orbit Frequency Coordination for the Satellite for the SAARC region.

Lack of political reconciliation and radicalization has increased unrest in Maldives and a broader crackdown can lead to more instability. This was one of the reasons why PM Modi could not visit Maldives earlier this year…

The Joint Commission discussions endorsed enhancement of the trade and investment ties and the development partnership between the countries and discussed various measures which could be recommended towards this objective. The next meeting of the India-Maldives Joint Commission would be held in 2017 in India.

On October 11, the Maldives government expressed hope that PM Narendra Modi would visit the country “very soon” as it admitted disappointment over his skipping the island nation on a tour to the region in March. Maldivian Foreign Minister Dunya Maumoon said the country was facing “political tension” and that the visit by External Affairs Minister Sushma Swaraj was a “signal” that India continues to be a close friend of the Indian Ocean archipelago. Lack of political reconciliation and radicalization has increased unrest in Maldives and a broader crackdown can lead to more instability.

This was one of the reasons why PM Modi could not visit Maldives earlier this year though it had been planned along with his visit to other countries in the Indian Ocean region. Because of this, the installation of Coastal Surveillance Stations in Maldives has also been delayed. Hopefully PM Modi can visit Maldives or Maldivian President Yameen visits India in the near future. Both countries are strategically important to each other and the defence pact needs to be carried forward. Definitely, deeper engagement with Maldives is needed with China hell bent upon dominating the IOR.

One thought on “Maldives – in eye of political storm”