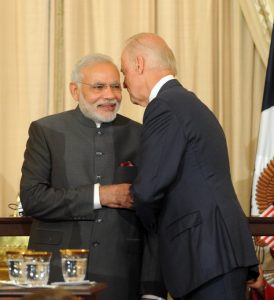 The inaugural speech of the POTUS Joe Biden was heard world over. He spoke of democracy prevailing despite being fragile, most difficult times with the pandemic affecting the economy, and the need to unite and rebuild America in face of extremism and terrorism of many kinds.  While the focus of his speech was the US, Biden spoke of repairing alliances and engaging the world once again. How the Biden administration will “repair alliances and engage the world once again” particularly with China, Iran, Pakistan and the Indo-Pacific will have profound effect on the region and set the tone of future Indo-US relations.

On December 28, 2020, Biden had stated, “As we compete with China and hold China’s government accountable for its abuses on trade, technology, human rights, and other fronts, our position will be much stronger when we build coalitions of like-minded partners and allies to make common cause with us in defence of our shared interests and values.” As far as America’s Indo-Pacific policy is concerned, Biden can be expected to by and large continue with the “United States Strategic Framework for the Indo-Pacific” approved by President Donald Trump in February 2018 and released on January 12, 2021. Biden is reportedly creating a post of ‘Indo-Pacific Coordinator’ within the National Security Council (NSC) and appoint veteran foreign policy expert Kurt Campbell to focus on challenges emerging from China in the Indo-Pacific. Campbell has also served as assistant secretary of state for East Asian and Pacific Affairs in the Obama administration and helped frame America’s ‘Pivot to Asia’ strategy.

The US Indo-Pacific Command (USINDOPACOM) plays an important role in America’s Indo-Pacific strategy. The Vice Chief of Indian Army visited USINDOPACOM in October 2020 and Lieutenant General Michael Minihan, Deputy Commander USINDOPACOM recently visited India to promote the strategic partnership further. But the success of America’s Indo-Pacific strategy under Biden will depend on the manner it is executed, how China succeeds in drawing nations more into its strategic sphere and  countering China’s muscle flexing, for which the future organization and form of the ‘Quad’ will also be important.

There is no comment by the Biden administration over China sanctioning 28 officials of the Trump administration including Mike Pompeo. If that is because of political rivalry, what happened to America First?

Biden’s China policy is the one that will have all round ramifications. The foremost task of the Biden administration is to revive American economy while the pandemic has abated little and attacks of new strains are more virulent whether COVID-19 mutated further or a fresh biological attack by China. How much Biden is prepared to ‘accommodate’ China for the sake of reviving the economy will be crucial? Biden has just lifted the ban on Chinese company’s investing in America’s power grid despite these being part of critical infrastructure. Did he do this simply to overturn Trump’s policies despite knowing the implications? Also there is no comment by the Biden administration over China sanctioning 28 officials of the Trump administration including Mike Pompeo. If that is because of political rivalry, what happened to America First?

China has lured the European Union with key market access concessions for inking an investment deal.  President Xi Jinping wants to use this deal as a signal to Biden that similar concessions can be provided to help revive the US economy. 2021 being the centenary of the Chinese Communist Party (CCP), Xi wants to showcase advances in his ‘China Dream’ using economic clout to overcome resistance to China, not that China sponsoring multiple conflicts can be ruled out while US battles the pandemic. Plainly, Xi expects Biden to be softer than Tump towards China, which in turn could America’s Indo-Pacific strategy.

America under Biden is rejoining the Paris Accord but the Iran Nuclear Deal is yet to be settled. Iran has called on Biden to unconditionally lift the US sanctions imposed by Donald Trump, promising in turn that Iran would reverse all the remedial measures it has taken in the wake of Trump’s withdrawal from the Joint Comprehensive Plan of Action (JCPOA) pact inked between Iran, the US, China, Russia, Britain, France and Germany, and that the “initiative squarely rests with Washington”.

Biden has said that if Tehran resumed strict compliance with the 2015 agreement Washington would rejoin it, with Antony Blinken, Biden’s US Secretary of State  saying, “But we would use that, as a platform with our allies and partners, to seek a longer and stronger agreement and also to capture these other issues, particularly with regard to missiles and Iran’s destabilizing activities.” The US rejoining JCPOA would be good for India, the region and South Asia.

Future Indo-US relations will become clearer over next few months. The reaction of the Biden administration over India importing S-400 missile systems and US policy towards Jammu and Kashmir will be important pointers.

As President-elect, Joe Biden had stated that while he would reduce the number of troops in Afghanistan, he would not withdraw the US military. News reports of January 2021 indicate Trump had brought the US troop strength in Afghanistan down to 2,500 before Biden took over. Notably, Biden had earlier said during a debate between presidential candidates of Democrats, “We can prevent the United States from being the victim of terror coming out from Afghanistan by providing for bases – insist the Pakistanis provide bases for us to airlift from against what we know”.

Now General Lloyd James Austin, Secretary of Defence to Biden has stated, “Pakistan is an essential partner in any peace process in Afghanistan. If confirmed, I will encourage a regional approach that garners support from neighbours like Pakistan, while also deterring regional actors, from serving as spoilers to the Afghanistan peace process.” Austin further said, “I will focus on our shared interests, which include training future Pakistan military leaders through the use of International Military Education and Training funds. Pakistan will play an important role in any political settlement in Afghanistan. We also need to work with Pakistan to defeat al Qaeda and the Islamic State of Khorasan Province (ISSIS-K) … I understand Pakistan has taken constructive steps to meet US requests in support of the Afghanistan peace process. Pakistan has also taken steps against anti-India groups, such as Lashkar-e-Taiba and Jaish-i-Mohammed, although this process is incomplete.”

As for relations with India, US Secretary of State Antony John Blinken had stated, “India has been a bipartisan success story of our successive administrations. It started towards the end of the Clinton administration. During the Obama administration, we deepened cooperation on defence procurement and information sharing. The Trump administration carried that forward including its concept of Indo-Pacific and to make sure we are working with India on concerns that the two countries share about terrorism. There are many ways we can deepen the cooperation that successive administrations have put us on.” Future Indo-US relations will become clearer over next few months. The reaction of the Biden administration over India importing S-400 missile systems and US policy towards Jammu and Kashmir will be important pointers.

It has been abundantly clear since long that the US considers Pakistan strategically more important than India especially because of Afghanistan. The surprising part  is that having commanded US CENTCOM, Austin still cannot see that Pakistan is the problem in bringing peace to Afghanistan rather than the solution, which has been stated by numerous US and NATO generals, as also Presidents of Afghanistan.

The US anyway was always more bothered about Pakistan-sponsored terrorism in Afghanistan rather than against India.

To top this, Pakistan is sitting in China’s lap. How then can the US expect Pakistan to provide bases to the US for whatever action unless there is US intervention? Does the US remember the circumstances under which the CIA and US Air Force were stopped from using the Shamsi airbase in Pakistan for surveillance and drone operations in December 2011?  It appears that the US is destined to keep going around the mulberry tree unless Capitol Hill becomes wiser.

Finally, Austin referring to Pakistan taking some “incomplete” steps against anti-India groups like Lashkar-e-Taiba and Jaish-i-Mohammed hardly inspires comfort. The US anyway was always more bothered about Pakistan-sponsored terrorism in Afghanistan rather than against India. But wonder if Austin is aware that in addition to some successful subterfuge about so-called measures against Lashkar-e-Taiba and Jaish-i-Mohammed, Pakistan is going full steam in reviving anti-India terror groups like Al Badr, Tehreek-ul-Mujahideen (TuM) and the Ghaznavi force for terror activities in Jammu and Kashmir.

One thought on “Joe Biden’s America and India”