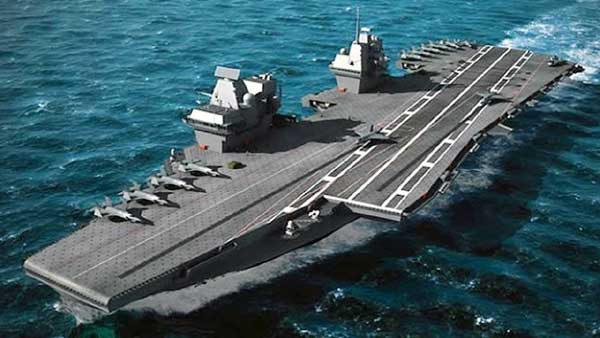 Reports in media indicate UK is in talks with the Indian government on building a new state-of-the-art aircraft carrier on the lines of Britain’s HMS ‘Queen Elizabeth’ as part of ongoing ‘Make in India’ negotiations. The report says that talks are underway for the Indian Navy to ‘buy’ detailed plans for the 65,000-ton British warship to build what is described as “copycat super-carrier”, to be named INS ‘Vishal’ in 2022. The design of HMS ‘Queen Elizabeth’ is jointly owned by BAE and Thales – British and French aerospace giants.

In 1987, India had procured British aircraft carrier HMS ‘Hermes’ which was renamed INS ‘Virat’, which was de-commissioned two years ago on May 12, 2017. HMS ‘Hermes’ had participated in operations in the Falklands. An Indian delegation has reportedly already visited Rosyth Dockyard in Scotland where HMS ‘Queen Elizabeth’ was built and where Britain is building its next aircraft carrier, HMS ‘Prince of Wales’. Stuart Andrew, Britain’s Defence Minister declined to comment on this specific issue saying, “We have regular discussions with India on a range of equipment and capability issues. It would be inappropriate to comment further.” But media quoting a BAE spokesperson confirms that BAE has begun discussions with India and that the design can be modified to meet Indian Navy and local industry requirements.

If the deal comes through, the new warship could be built in India under ‘Make in India’ with many parts possibly supplied by British companies. INS ‘Vishal’ would serve alongside India’s 45-000-ton aircraft carrier INS ‘Vikramaditya’ purchased from Russia in 2004 and the 40,000-ton first indigenous aircraft carrier INS ‘Vikrant’, which is undergoing outfitting at Kochi Shipyard Limited. In case of INS Vikrant, Navy is looking for 57 multi-role fighter jets because naval version of indigenous Light Combat Aircraft (Tejas) cannot operate from its deck Sea acceptance trials of INS Vikrant are to commence in latter half of this year and the carrier is to be delivered to the Navy by 2021, as stated Admiral Sunil Lamba, Chief of Naval Staff on April 20, 2019.

News of the third aircraft carrier has set off the debate whether India needs a third aircraft carrier and whether it would not be better to arm its islands, particularly the Andaman and Nicobar Group of Islands (ANI) – getting islands ready not only to defend India’s exclusive economic zone (EEZ) but preparing them as jump off points for launching offensive operations, when required. Induction of a Chinese CBG in the India Ocean Region (IOR) may be some years away but China is already building its third aircraft carrier (displacement of about 80,000 tons) and indications are China will have minimum four carrier battle groups (CBGs) in service by 2030.

Some reports indicate China’s fourth aircraft carrier will be nuclear with displacement of 110,000 tons, making 30 knots and accommodating over 70 next generation fighter aircraft and drones – matching super-carriers of the US. For ground support of CBGs, China has militarized the SCS and plans to build 18-19 bases in the IOR under pretext “Overseas Strategic Support Bases”. China has invested in 95 ports worldwide and debt-trapped Sri Lanka in handing over Hambantota port for 99 years. Chinese naval bases in Djibouti and Gwadar (Pakistan) are home to PLA marines. No doubt INS Vishal will be expensive, taking into account the overall cost of a CBG, but the carrier versus island debate must be viewed in the backdrop of what extent of sea control would India require in the future.

India strategically juts into the Indian Ocean, through which two-third of worlds oil shipments, one-third of bulk cargo traffic and half the world’s container traffic transit. This translates into some 90,000 ships of world’s commercial fleet (9.84 billion tons) annually. India’s international trade (95% by volume and 70% by value) moves by sea, including large amount eastward with China, ASEAN countries and Southeastern nations. India needs to protect its coastline (7,863 km), EEZ (1.02 million sq km) and 17,000 sq km of offshore assets.  India’s cargo traffic handled by ports is expected to reach 1,695 million MT by 2021-22, as against 643 million MT 2014-15. That is why India’s naval plans always catered for both eastern and western flanks, even though existing single aircraft carrier in western naval fleet may give impression of western bias.

Importantly, there is no denying that CBGs are best for sea control thousands of kilometers away from own shores. As part of RMA, China did initially invested in massive infusion of submarines but is now concentrating on CBGs because submarines are good for sea denial, not sea control. Also, submarines cannot achieve three-dimensional control over a large expanse of ocean, far from own shores. INS Vishal is still in planning stage and would perhaps be operationalised by 2025-2020 or so. China could have more than four CBGs in service by then. Will India need power projection capabilities beyond its immediate neighbourhood by then including for guarding SLOCS? The answer should be in the affirmative.

Indian Navy’s ‘Maritime Capabilities Perspective Plan 2022’, which includes the indigenous construction component, already caters for three aircraft carriers.  The Science and Technology Roadmap (2015-2035) and Indian Naval Indigenization Plan (2015-2027) would steer the efforts to synergize overall Research and Development (R&D) efforts in the maritime sector.  But ultimately, financing will be the main factor for the third aircraft carrier. This will depend on the health of the Indian economy and what portion of GDP is allocated for defence which can ensure overall growth of the military. The latter is extremely important least we indulge in foolishness of only going in for big-ticket weapon platforms. For example in the current context, the amphibious and mine clearance capability in the Navy remains neglected by the government.

Additionally, optimizing defence potential of island territories is far from satisfactory notwithstanding media blitz over some initiatives undertaken. China makes no bones about her ‘Malacca Dilemma’ and ensures aggressive presence in IOR. The ANI is a gigantic natural aircraft carrier, which must be fully developed militarily. In addition, establishment of a transshipment hub in ANI would be economic and strategic game changer, facilitating enhanced naval co-operation between the Indian Navy and other maritime powers in the Indo-Pacific.  Yes, Chinese aggressive moves in Indo-Pacific have caught the attention of our government and some steps have been taken in the IOR / Indo-Pacific. But with Indian economy running smooth with indications of future surge, the military muscle must be built holistically in a well thought out time-frame.

First published in May 2019