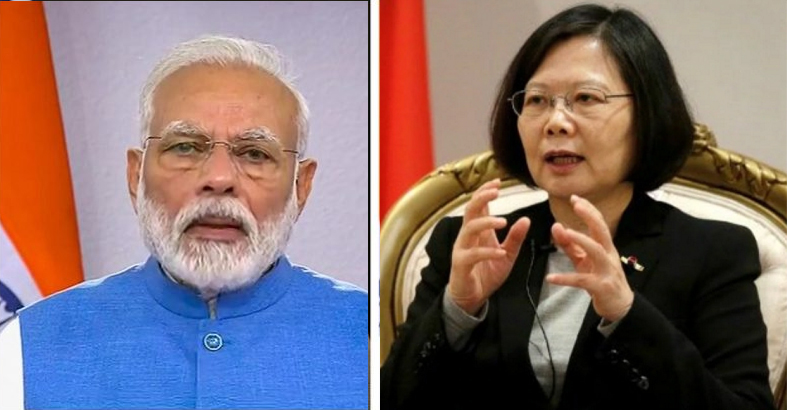 Taiwan is in the news not because China is Taiwan’s topmost trading partner which imported 27.9 percent of Taiwanese exports worth US$91.9 billion during 2019 while India was at rank 12 from the top at one percent export of Taiwan at US$3.3 billion, but because China is threatening to annex Taiwan and Taiwan’s President Tsai Ing-wen says she does not rule out a Chinese invasion. Last month China warned the US of potential ‘serious damage to relations if it does not withdraw from an upcoming economic meeting with Taiwan, Wang Wenbin.  China’s foreign ministry spokesman urged the US to “stop all forms of official exchanges with Taiwan, so as to avoid serious damage to China-US relations and peace and stability across the Taiwan Strait.”

Amid the heightening US-China trade war and increasing tensions in Western Pacific, the US State Department announced on October 22 that President Donald Trump’s administration has approved export of US$ 1.8 billion worth weapons including surface to air missiles to Taiwan. These include 11 x High Mobility Artillery Rocket Systems (HIMARS) M142 Launchers costing around of US$436.1 million along with 6 x MS-110 Recce Pods worth some $367.2 million. More protests from Beijing can be expected but this just part of an overall package that US plans.

According to US media, the White House is moving five separate sales of sophisticated military equipment to Taiwan valued at around US$5 billion as China threatens Taiwan increasingly. Further exports will likely include drones and land-based Harpoon anti-ship missiles to serve as coastal defense cruise missiles. 100 cruise missile stations and 400 missiles itself would cost around US$2 billion. Apparently, the US has realized follies of the Nixon-Kissinger era in creating the monster in China.

Republic of China (better known as Taiwan) held a United Nations Security Council (UNSC) seat and was recognized by most Western nations as the only Chinese government till October 25, 1971 when Taiwan’s UNSC seat went to the PRC courtesy US support. In 2010 Taiwan was invited as observer to attend the World Health Assembly but under the name of Chinese Taipei because of Beijing’s insistence. Perhaps China feared ROC may be interpreted as ‘Real Original China’ since Chiang Kai-shek’s Republic of China (ROC) government, which fled the mainland to Taiwan in 1949, claimed it represented whole of China. China has never exercised sovereignty over Taiwan which is very much an independent nation with its own democratic government, Constitution and standing military.

Taiwan is a member of the Unrepresented Nations and Peoples Organization (UNPO), represented by The Taiwan Foundation for Democracy (TFD) under the name “Taiwan”. The UNPO headquartered at Hague (Netherlands) has 42 group members including Taiwan, Tibet, East Turkestan, Baluchistan, and Gilgit-Baltistan besides others. China having officially shed its mask of “peaceful rise” and bombing the world with China Virus now poses a direct challenge to the US and rest of the world. Beijing’s all around muscle flexing has India also in its crosshairs, as its aggression in Eastern Ladakh has proved.

Chiang Kai-shek officially visited India (then under British rule) from February 5 to 21, 1942 during World War II as the Allies’ supreme commander of China Theater. He reportedly advised British to grant India independence by stating, “Great Britain should give real political authority to the Indian people as soon as possible without waiting for a demand from the people. Of course, India’s participation in this war is striving for the victory of the democratic camp against aggression, but it also is vitally related to the liberty of India herself. Objectively, I consider this to be the most enlightened policy, and it will certainly not be harmful but be advantageous to Great Britain.” He also reportedly cabled US President Roosevelt entreating him to persuade British Prime Minister Churchill act accordingly.

India and Taiwan have been making efforts to significantly expand bilateral trade and investments, especially in the fields of information technology, energy, telecommunications and electronics. Major Indian exports to Taiwan include waste oil and naptha, cereals, cotton, organic chemicals, copper, aluminum and food residues. Major Taiwanese exports to India include integrated circuits, machinery and other electronic products. India is also keen to attract Taiwanese investment particularly in hi-tech and labour-intensive industries. In 2018, India and Taiwan signed an updated bilateral investment agreement to expand economic ties. Investments by Taiwanese firms in India reached $360.5 million by the end of 2018. Bilateral trade between the two countries grew 18 percent to $7.2 billion in 2019.  Currently some 140 Taiwanese firms are operating in India.

Current news in Indian media of possible India-Taiwan trade talks has raised hackles in Beijing with China’s foreign ministry spokesman Zhao Lijian stating that China was “firmly opposed to any official exchanges of any form and the signing of any agreement of official nature between Taiwan and any country having diplomatic relations with China. The Indian side should earnestly abide by the one-China principle and handle the Taiwan question prudently and properly.”

Above China’s reaction is idiotic considering it blatantly violates India’s territorial integrity through illegal occupation of Aksai Chin and Shaksgam, makes more illegal claims to Indian territories, doesn’t recognizing Arunachal Pradesh, Jammu and Kashmir and Ladakh part of India, has been supporting and arming insurgencies in India past 70 years especially in the northeast and above all the recent aggression in Eastern Ladakh. When China began propounding its ‘One China’ theory, it was only about Tibet (annexed) and Taiwan (to be annexed) but today this has expanded to include vast tracts of waters of the Pacific, ECS, SCS, islands and reefs, parts of Bhutan, Nepal and even Tajikistan. China has done an about turn on its ‘One Country, Two Systems’ bogus theory in Hong Kong.

Taiwan has a dynamic, capitalist, export-driven economy with gradually decreasing state involvement in investment and foreign trade. Both India and Taiwan have much to gain economically and strategically by upgrading mutual partnership. The Taiwan Semiconductor Manufacturing Co (TSMC), which is a supplier for Apple, is building  a semiconductor facility in Arizona, USA, total spending on the project being $12 billion. India has a large deficit in semiconductors and similar Taiwanese ventures in India are need of the hour.  Early this month, the Modi Government approved to firms including Taiwan’s Foxconn Technology Group, Wistron Corp and Pegatron Corp for investing over $143 billion in smart-phone production in India over five years. Taiwan government’s InvesTaiwan office says, “Taiwan investors considering India see a huge domestic market and ample labor.”

Prime Minister Modi government needs call the bluff of China’s so called ‘One China’ policy and stand up against China’s bullying tactics. Time is more than opportune for India not only to have trade talks but establish full diplomatic relation with Taiwan.