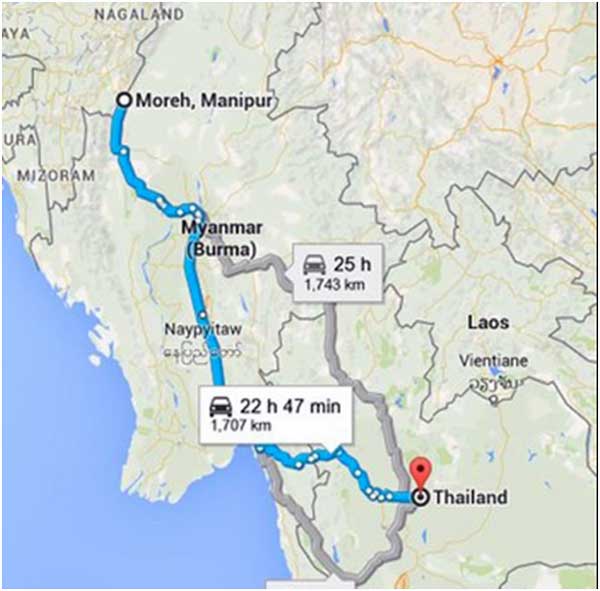 The IMT Highway not only links India to Thailand in Southeast Asia but also provides for greater integration with Myanmar with whom India has had cultural, historical, ethnic and religious ties…

The 25.6 kms long Myawaddy-Thinggan Nyenaung-Kawkareik section of the IMT Highway was put into service in July 2015, reducing travel time between Thinggan Nyenaung and Kawkareik from three hours to 45 minutes. This section also forms part of the East-West economic corridor of the Greater Mekong Sub-region. The IMT Highway will be an important facilitator in Prime Minister Narendra Modi’s Act East Policy (ACEP). In order to catalyze investments from the Indian private sector as part of ACEP, there is a proposal for a Project Development Company through separate Special Purpose Vehicles setting  up manufacturing hubs in Cambodia, Myanmar, Laos and Vietnam (CLMV) in order to cultivate extensive economic relations with Southeast Asia.

During the Third India-CLMV Conclave held in January 2016, Commerce Minister, Nirmala Sitharaman had reiterated the importance of connectivity between India and CLMV countries in line with the Mekong-Ganga Cooperation Process. The IMT Highway will no doubt facilitate trade, commerce and other economic activities including tourism providing opportunities for stay and driving along some spectacularly picturesque locations in the region over a period of days. But most significantly, this highway is also of great strategic significance to India.

Strategically the IMT Highway not only links India to Thailand in Southeast Asia but also provides for greater integration with Myanmar with whom India has had cultural, historical, ethnic and religious ties and who unlike Pakistan has refused to barter its sovereignty to an aggressive China albeit China is engaged in a number of projects in Myanmar. Myanmar is strategically important to India as it is the only ASEAN country that shares a border with India and can act as a link between India and ASEAN; Myanmar is India’s gateway to Southeast Asia.

The recent decision of the Modi government for the National Highway Authority of India (NHAI) to develop a grid of 27 East-West and North-South four-lane corridors, crisscrossing India to facilitate smooth travel and seamless travel will help optimize connectivity with the IMT Highway even more. At the same time Northeast India too is the land bridge to the Greater Sub-Mekong Region. India shares a 1643 kms border with Myanmar. While economic cooperation with Myanmar needs to be directed particularly to Myanmar’s western region and north-western areas being adjacent to north-eastern areas of India, the IMT Highway passes through hotbeds of insurgencies; Sagaing Division in west Myanmar and Moreh in Chandel district of Manipur. 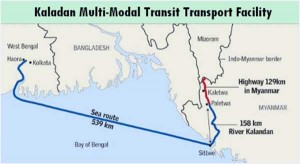 China has been using proxy irregular forces against both Myanmar and India; lethally arming the United State Wa Army in Shan province of Myanmar and establishing the United Liberation Front of West, South, East Asia (ULFWSEA) against India binging nine militant organizations including NSCN (K) and ULFA under common umbrella. The timing of the establishment of the ULFWSEA concurrent to India’s ACEP announcement indicates that China not only aims to disrupt development of India’s northeast region with her expanded illegal claim to entire Arunachal Pradesh in 2005 but also disrupt India’s economic linkages with Southeast Asia through the IMT Highway. Fortunately unlike Pakistan, Myanmar has not allowed its sovereignty to be held hostage by China for anti-India activities.

Ironically the Chinese government sees India as an economic rival in the long run despite massive bilateral deficit in China’s favour and India reiterating time and again there is enough space for both countries to grow together. The new National League of Democracy (NLD) government in Myanmar provides excellent opportunity for the Modi Government to usher a new era of Indo-Myanmar relations through transparent and committed diplomacy, closer economic cooperation and building the right politico-military environment, latter aiming for complete demarcation of the unsettled border, and jointly battle the scourge of terrorism. Japanese investments in Myanmar and India’s northeast infrastructure projects would help integrate the region more, ushering in development and prosperity.

There is need to have pro-active joint strategy to deal with border militancy hitting the insurgent leadership and camps repeatedly – a cohesive inland security arrangement.

India already has a ‘legal assistance pact’ with Myanmar and a MoU for joint border patrolling and information-sharing. The India-Myanmar Joint Consultative Committee has been operational since July 2015, while the Indo-Myanmar Regional Border Committee comprising of army and paramilitary officials from both countries has also discussed joint border actions. These arrangements need to be pursued proactively. Prime Minister Modi is already ceased with the need to develop our northeast and closer cooperation with Myanmar.

The strategic gains of the IMT Highway, the ACEP and closer integration with Myanmar in particular are immense. Unlike China, India shares democratic values with Myanmar. Both countries are also cooperating in different multilateral forums such as ASEAN and BIMSTEC which help strengthen the relationship.

There is need to have pro-active joint strategy to deal with border militancy hitting the insurgent leadership and camps repeatedly – a cohesive inland security arrangement. Optimizing on the IMT Highway and ACEP has much strategic merit for India, Myanmar, Thailand and the region as such.