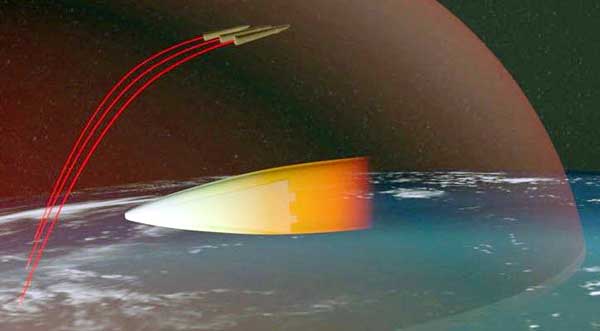 A headache for the US defence establishment is hypersonic weapons of Russia and China. Hypersonic missiles flying above Mach 5 can be cruise-type missiles, powered throughout flight or carried on board a ballistic missile from which the hypersonic glide vehicle (HGV) separates and then flies to its target. Russia’s first regiment of Avangard hypersonic missiles became operational in December 2019. Capable of travelling 20 times the speed of sound, these missiles have a glide system that provides tremendous maneuverability, making them impossible to intercept.

Mounted on top of an ICBM, the Avangard can carry a nuclear weapon of up to two megatons. Post a successful test in December 2018 with the missile hitting a target 6,000km away, President Putin said, “The Avangard is invulnerable to intercept by any existing and prospective missile defence means of the potential adversary.”

Russia is also testing the 3M22 Zircon missile that is likely to be deployed in near future. Zircon is a scramjet powered manoeuvring anti-ship hypersonic cruise missile which reportedly has a maximum speed of Mach 8 to Mach 9 and an operational range of 500 km carrying warhead weighing 300-400 kg. It can be launched by both submarine and surface ships.

It is believed that the Brahmos II being jointly developed by India and Russia is the export version of Zircon. BrahMos II with a speed of Mach 7 (8,600 km/h) will be the world’s fastest cruise missile when it enters service with the Indian Armed Forces some 7-8 years from now. The scramjet powered BrahMos II can be launched from ship, submarine, aircraft and land-based mobile launchers. It is likely to be ready for testing within this year – 2020.

China first tested its HGV DZ-ZF (dubbed EU-14 by the US) fitted with DF-17 on January 9, 2014. Subsequent tests were held on August 7 and December 2 in 2014, June 7 and November 27 in 2015, in April during 2016 and twice in 2017. DZ-ZF became operational in PLA on October 1, 2019 coinciding with celebration of the 70th anniversary of the founding of PRC. Exact speed of DZ-ZF is not known but it is assumed to have speeds between Mach 5 and Mach 10. The glider can be used for nuclear weapon delivery as also for precision strikes delivering conventional warhead. DF-ZF can be fitted with ballistic missiles like the DF-21 MRBM with extended ranges of 2000-3000 km, and DF-31 ICBM having extended range of 8000-12000 km.

There is speculation that DZ-ZF could be used in short-range roles like anti-ship missiles to strike US carrier strike groups at sea and other moving targets, the long-range role being strategic bombardment.

On March 21, 2020, the US announced it successfully tested an unarmed prototype of a hypersonic missile. The test followed the first joint US Army and Navy flight experiment in October 2017, when the prototype missile demonstrated it could glide in the direction of a target at hypersonic speed. Pentagon said the test glide vehicle flew at hypersonic speeds of Mach 5 to the designated impact point. But the big problem for the US is defence against Russian and Chinese HGVs that give sinister twist to both conventional and nuclear attack.

HGV launch can be like traditional ballistic missiles but instead of following an arc high above the atmosphere, the re-entry vehicle is put on a trajectory that allows it to enter Earth’s atmosphere quickly, before gliding un-powered for hundreds or thousands of km. It is the extraordinary maneuverability as it glides towards its target that makes it well nigh impossible to destroy by existing anti-missile defence systems.

HGV can travel much faster than current nuclear-capable ballistic and cruise missiles at low altitudes, can switch direction in flight and do not follow a predictable arc like conventional missiles, making them much harder to track and intercept.

In January 2020, the US Missile Defense Agency (MDA) issued a request for proposal (RFP) to the industry for submitting proposals by March 19 to build a Hypersonic Defense Regional Glide Phase Weapons System interceptor. The RFP said MDA hopes to better understand the technical utility of such regional hypersonic defensive system and will provide a pathway to subsequent tactical interceptor and fire control capability, integration risks, anchor modeling and simulation in areas of large uncertainty and to increase the interceptor technology leading to a prototype for testing in simulated environment.

MDA noted that base period prior to an initial design period will not exceed 18 months. Concurrently, the US Department of Defense (DoD) is working on development and testing of offensive hypersonic weapons with a plan to flight test a prototype as early as this spring. The US Navy wants its ship-launched capability fielded in 2023 followed by a submarine-launched missile in 2024. The US Air Force wants to field its air-launched version in 2022.

The US Army plans to field a long-range hypersonic weapon that can be launched from a mobile ground platform by 2023. There is also speculation that the US may place more importance to directed energy weapons (DEWs) as counter measure for HGVs, but DEWs are still at the experimental stage.

On June 11, 2019, India launched the first test flight of its Hypersonic Technology Demonstrator Vehicle (HSTDV). The missile is part of India’s efforts to develop a scramjet engine, which is considered the next frontier for future missile, aircraft and spacecraft technology. The test is also important for further development of the BrahMos-II cruise missile.

Further the DRDO also has work ahead in DEWs that are more practical and more effective in a space (free of particle interference) compared to earth’s atmosphere. While the Indian Military is working on establishing an Air Defence Command, India must acknowledge that the HGV threat from China is already live. Considering the gestation period required for establishing effective air defence against HGVs, India must join hands with its strategic partners for this.

Japan too has unveiled its HGV program though no test has been conducted yet, Additionally, while Indian military is working on reorganizing its Commands, we could take a cue from China’s Strategic Support Force that combines functions of intelligence, technical reconnaissance, electronic warfare, cyber warfare and space warfare.

HGV technology is sure to start a new arms race, especially in nuclear weapons. The speed and maneuverability of HGVs will also exacerbate the dilemma whether the incoming missile(s) are nuclear or conventional. The US withdrew from the INF Treaty in August 2019, after almost a decade arguing that Russia’s development of a ground-launched cruise missile, the 9M729 (SSC-8 Screwdriver), breached the terms of the treaty. Moreover, China not being signatory to the treaty was free to deploy many ground-launched ballistic and cruise missiles threatening US air and naval forces in the Western Pacific.

The New START arms-control treaty between US and Russia, capping size and number of their nuclear warheads, ICBMs and submarine-launched ballistic missiles, will expire in February 2021. Whether it will be renewed is not known. However, given the aggressive stance of China it is unlikely to agree to sign any treaty that it perceives hindering its global ambitions. At the same time, there has been some thinking about the need for US, Russia and China to discuss the issue of HGVs. India needs to be part of this dialogue.

One thought on “Hypersonic Weapons”