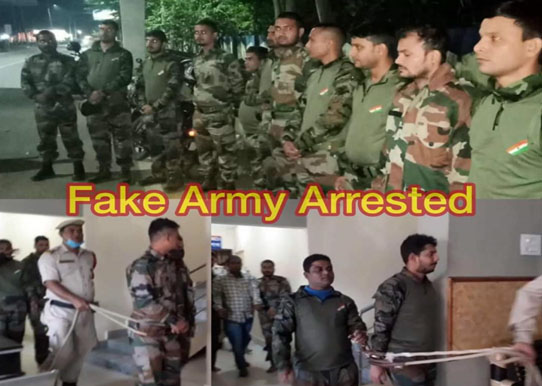 Incidents of terrorists wearing Army uniforms to attack army bases in Jammu and Kashmir have been happening over past years. Donning Army uniforms naturally would help terrorists close in to entrance of a unit base even by daylight, duping  sentries posing as regular Army soldiers, open surprise fire to kill them and gain entry to the encampment. Pakistan does not have to supply these uniforms because Army uniforms are freely available in open market in India – not only uniforms but every accoutrement that goes with the uniform, even duplicate full-sized medals.

There have been scores of cases throughout the country of individuals posing as army officers to dupe the system. Some of them have been getting into army establishments with fake identity cards, even staying in unit messes. Some may be simply charlatans like the recently reported case in Hyderabad of one M Srinu Naik who procured a fake Army identity card in the name of Major MS Chauhan and posted his photographs on social media wearing Army dress that showed awards also. He used this fake profile through different marriage brokers to dupe 17 women into marriage, earning Rs 6.61 crores as dowry and bought a house and three cars. He also was found with an Aadhar Card with his wrong date of birth.

Of late there have been many cases of individuals posing as Army officers posting their photographs on social media, especially on Facebook. Many of them show proficiency badges and awards they never earned. An odd one gets noticed and investigated but majority perhaps get away. Of major concern should be such individuals who are faking so on behest of foreign intelligence and indulging in anti-national activities. This seriously needs to be looked into by civilian intelligence agencies because military intelligence by itself may not be able to cope with these fakes among the millions communicating on multiple social media platforms.

An equally important issue is what happens to such individuals after the initial publicity of them being caught – the prosecution and punishment especially those involved in spying and anti-national activities? Does prosecution drag on with culprits going on bail? Is the punishment adequate to deter them from changing identities after they are released and continue with same or similar activities? It is no secret that in our system prominent anti-nationals (politicians, journalists, scholars etc) can say anything under the pseudonym of free-speech and incite hatred and passions without fear of any action beyond verbal condemnation, Presumably, this is also the manner in which we deal with personnel caught faking as Army officers – at best some minor punishment and small-time custody. This is a serious issue that needs to be looked into unless we are happy giving a free-hand to foreign intelligence and anti-nations without bothering about the cumulative consequence.

A new phenomenon has recently emerged in Assam. Assam Police has arrested a group of 11 fake army jawans at Lokpriya Gopinath Bordoloi International Airport in Guwahati. The arrest was made when these fake army jawans were roaming in front of the airport. Police recovered a four-wheeler, five motorbikes and fake identity cards of Indian Army from their possession. Media reports indicate that this group of miscreants wearing camouflage dress has been involved in many illegal activities in Guwahati. They allegedly cheated many in the name of “selling vehicles and other electronic materials”. A senior Assam Police officer has stated, “We arrested 11 persons. They have been roaming in army uniform since last one month.  We are investigating for further details.”

Above possibly is the first such case in the country of a group of 11 individuals faking as Army jawans openly in public. On face value it may be presumed they are simply out to make money and that the vehicles and electronic items they have been selling were either stolen by them or they are selling these on behalf of a bigger group. However, sale of stolen goods is hardly news in India which does not require masquerading as Army jawans in public openly. Their activities may not be that innocuous after all but something bigger – broader intelligence network as prelude to destructive activities on behalf of foreign agencies? Why were they roaming in front of Lokpriya Gopinath Bordoloi International Airport? Meeting someone, collecting information or conducting reconnaissance for a future act?

Media reports of November 12 have revealed that police has arrested Elisa Manoj Pande Khadka, a 26 years old woman from Lumbini in Nepal living in the quarter of an Army Captain in College of Military Engineering, Pune since March 23 – past seven and a half months. Khadka, who was charged and arrested under the Officials Secrets Act (OSA) and sections of the Indian Penal Code for living illegally in the defence establishment, told police she entered the CME jumping over the wall in Phugewadi area around 11.30 pm on March 23, which may or may not be true. The Army officer is obviously complicit and would face prosecution. Police arrested Khadka on basis of an FIR lodged by Imran Abdul Kadir Hajwani of Bhavani Peth who alleged that she has cheated him of Rs 85 lakh with false assurances of making him a partner in a business in the United Arab Emirates.

In context of the above, Khadka honey-trapping the Army Captain to obtain intelligence is very much a possibility. There have been multiple instances of honey-trapping in India by women working for foreign intelligence. Sometime back Rajya Sabha Member of Parliament Subramanian Swamy had mentioned that few officials of our Ministry of Defence were honey-trapped though he did not disclose their names. Not only has Pakistan’s ISI increased its activities in Nepal, Khadka hails from Lumbini where China’s influence is increasing fast. China is focused on.  In 2018, China unveiled plans for redevelopment of Lumbini including an airport and seminary-cum-monastery at an estimated cost of between $1-3 billion.  China plans to make Lumbini a China-dominated hub for Buddhist tourism. The Qinghai-Lhasa railway is to be extended to Lumbini via Kathmandu 35 China Study Centres in southern Nepal have been propagating Chinese language and anti-India propaganda. To add to this, China’s communist regime recently introduced Mandarin in all schools For China which had honey-trapped TN Kaul, India’s Chargé d’affaires in Bejing way back in 1954, launching Khdka would be child’s play.

In context of the Fake Army of Assam, it would be prudent to closely examine whether their activities are linked to the ULFA (I). China is hell bent upon destabilizing India, especially our northeast, which China’s state-sponsored media keep threatening periodically. Beijing has been hosting Paresh Baruah heading ULFA (I) and his cadres past several years at Ruili on the Chinese side of the border crossing with Myanmar. Fresh reports indicate Baruah’s presence in Kachin area of Myanmar where several insurgent groups of northeast have their training camps and bases. The recent surrender by Drishti Rajkhowa (Paresh Baruah’s deputy) to the Indian Army may or may not be a ruse to use him as a “sleeper” but the Assam’s Fake Army could be a new experiment by Chinese intelligence to upgrade ULFA (I) activities in India.

3 thoughts on “Fake Army of Assam”