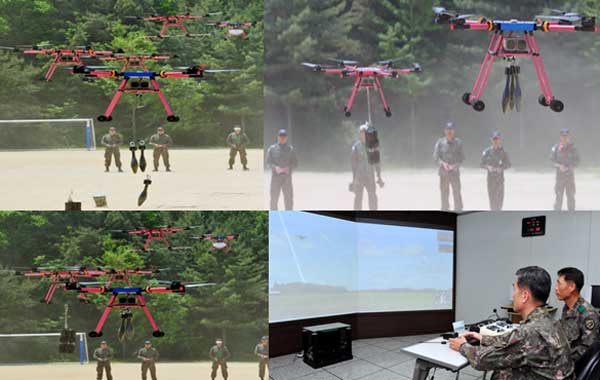 The ISIS used drones extensively in Iraq-Syria for reconnaissance, surveillance and dropping explosives and mines, inflicting casualties and caution on attacking forces. As early as 2015, Iraqi security forces had reported ISIS using drones in the fight for Ramadi in Iraq’s western Anbar province. Drones loaded with explosives do less actual damage but do cause shrapnel injuries. However, the panic effect is considerable. One media report quoting an Iraqi Special Forces stated at least three Iraqi troops had been killed by the drones and dozens injured, and that most of the drone parts were being purchased in Turkey and smuggled into Iraq through Syria while others were being largely made from scratch.

Same happened in the battle for Mosul, where ISIS also used tiny drones to help guide suicide car bombers to target Iraqi attacking forces. This marked a new phase of terrorist organizations exploiting modern technology. What the ISIS were actually doing is hacking store-bought drones, using rigorous testing protocols and innovating tactics that mimic those used by US unmanned aircraft to adapt to diminishing numbers of fighters and a battlefield that is increasingly difficult to navigate on the ground.

According to one report, thousands of dollars of drone equipment was purchased in a single month from a large warehouse in a “recaptured region”, including purchase of wires, silicon, electrical plugs, cables, rotors, GoPro cameras, styrofoam wings, fins and radio transmitters. In all, a half-dozen of the storehouses to make and modify the drones were found in Mosul.

The above prowess of ISIS since at least 2015 should be taken into account in light of the current ISIS focus on South Asia, proclamation of establishment of a province in J&K (“Wilayah of Hind”), open threat to attack Bangladesh and India, posters in Bengali language appearing in West Bengal, and intelligence agencies warning that ISIS in Bangladesh are planning attacks in West Bengal. We may see further refinement in use of drones since modern technologies are developing rapidly: upgraded motors; better power systems and batteries; better navigation technology, and; miniaturization coupled with heavy duty on-board computers. Modern quadcopters are strikingly different from their toy progenitors; they are able to fly through heavy rain, as well as through blistering heat, lifting solid charges.

In August 2018, Russians reported increase in swarm drone attacks on its military base in Syria. A British observatory reported 13 assaults in July and five in August on the Russian base, out of a total of 23 since January 2018. These drones were loaded with explosives. Presently, armed drones of Yemen-based Houthi rebels striking Saudi Arabia and UAE is in the news; striking Abha, Jizan, Afif, al-Dawadmi and oil pipeline close to Riyadh in Saudi Arabia, as also in vicinity of Abu Dhabi and Dubai in UAE.  Houthis use drones of two types;  ‘Qasef-1’ with a range of 145 km and ‘UAV-X’ with a range of 1,450 km. This indicates to the world enormity of the threat, both from adversarial militaries and non-state/state-sponsored terrorist organizations. Conflict in Middle East, Gulf and possible war in Iran are all about oil, geopolitical power and promotion of military-industrial objectives.

Republic of Korean Army recently conducted successful tests of drone-bombers, which also armed with 60-mm mines at in the Army Intelligence School located at Inchon.  A swarm of such drones-bombers can create a serious problem for any army. In this context, India should be concerned about drone capabilities of China. China’s 2017 record of demonstrating 1,108 drones operating together and performing variety of tasks was overtaken by Intel, by launching a swarm of 1200 drones during the 2018 Winter Olympics 2018 in South Korea. But China overtook that record same year by flying a swarm of 1374 drones during Labour Day celebrations at Xian on May 1, 2018. More significantly, China displayed a ‘military’ drone swarm of 119 drones in August 2017, breaking the US record of 103 drones in the same year. PLA envisages using drone swarms even against US fighter jets, naval vessels and aircraft carriers.

In 2017, China also successfully tested launching drones using electromagnetic pulse (EMP), reaching 100 km/hr within moments of launch and autonomously adjusting the trajectory and altitude while streaming towards the target. China can pass such technology to Pakistan / Pak-based terror groups.

At home the National Security Guard (NSG) has been equipped with armed drones, which can also drop grenades. But the DRDO has yet to come out with drones for the Armed Forces. The Army has been experimenting with drones through the Army Commanders Financial Powers and other avenues. The IAF launched a Swarm Drone Competition on October 8, 2018, open to all Indians, including students in all educational institutions across India.

IAF is reimbursing Rupees 10 crore on R&D funds, awarding the winner (s) a prize of Rupees 10 Lakhs and follow it up with an initial co-production order with the IAF’s Base Repair Depot (BRD) of up to Rupees100 crore.  IAF is looking at swarms to deliver relief supplies in disaster-hit regions, especially in remote and far-flung areas, with a single operator in a portable ground control unit to be able to control up to 50 drones that can fly 100 km carrying a payload of one kg and spend up to an hour on the target. Top three winners will get Rs 10 lakh as prize, followed by a co-production opportunity with a Base Repair Depot. The winners are to be announced on Kargil Vijay Diwas on Jury 26, 2019.

As per media reports of 2015, India was world’s top drone importer after UK and France; 22.5% world’s UAVs were imported by India from 1985 to 2014. India’ first private sector unit for manufacturing UAVs jointly by the Adani Group and Elbit Systems of Israel to develop Hermes 900 and Hermes 480 medium altitude long-endurance UAVs for the Indian and global market opened in Hyderabad in December 2018. Ironically, China today exports 1000 drones on daily basis while India exports not even one. That notwithstanding a holistic view needs to be taken with respect to the emerging drone threat, specifically from terrorist organizations like the ISIS and Paki-based terrorist organizations.

Drones are being used in India for shooting concerts and movies, filming private parties, by police organizations for surveillance and monitoring traffic, and for surveillance and intelligence gathering by Armed Forces. The NDRF used drones during the earthquake relief in Nepal. Current regulations in India prohibit use of drones beyond visual line of sight (BVLOS) while the market opportunity in the sector is worth $161million by FY 2020 (Inc42 DataLabs estimates). For forming regulatory regime allowing use of drones BVLOS, DGCA has invited expressions of interest (EOI) to conduct experiments in the use of drones. The experiments, as per DGCA, will pave the way for enabling future BVLOS operations. Interestingly, while Amazon has successfully conducted test bed for delivery of items at the customer’s doorsteps, it cannot make it operational in the US unless the regulations for use of drones are revamped and promulgated.

Policy makers and the our security establishment need to take a concerted view of the drone threat. We need to develop matching capabilities – both offensive and defensive, focusing on bigger drone swarms as well as the smaller variety that can be used by terrorists. With existing proliferation of drones in the country, intelligence agencies have a gigantic task for keeping track of terrorist plans and activities.  Post the Tokyo subway gas attacks in 1995, Japanese discovered that the ‘Aum Shinrikyo’ cult responsible for the gas attacks had smuggled in a Mi-4 Russian helicopter part by part which was yet to be assembled. And, we are a huge chaotic democracy.