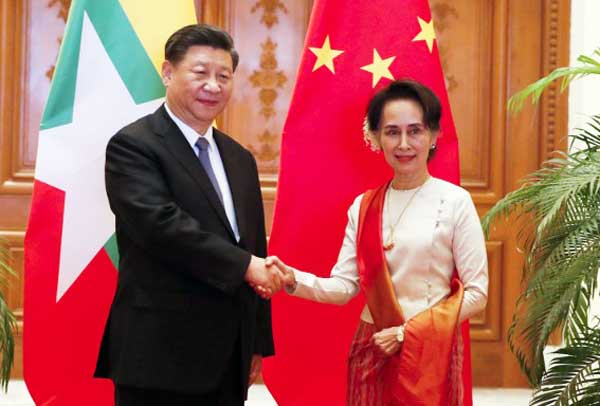 Chinese President Xi Jinping’s visit to Myanmar on January 17, 2019 carried the hallmarks of China’s strategy of planning and preparations decades in advance. Economic and military aid to Myanmar had been ongoing past several years with China investing in multiple projects including oil-gas pipeline from the Indian Ocean to its hinterland. But US interests in Myanmar and Aung San Suu Kyi’s (now State Counselor) American connection was making Beijing cautious from trapping Myanmar like Pakistan. Beijing therefore added sub-conventional muscle in dealing with Naypyitaw. The Shan State-based United Wa State Army (USWA) was armed to the teeth even with missile fitted helicopters as a Sword of Damocles over Myanmar should it try to proximate the US.

But above was not all. In conjunction Pakistan, China developed close links with the Arakan Rohingya Salvation Army (ARSA) headed by a Pakistani national. Concurrently China projected a benign face by offering money to Rohingya refugees in Bangladesh to return to Myanmar. To China’s glee, the West slapped human rights charges against Myanmar over the Rohingya issue. The Hague-based international Court of Justice is likely to rule shortly whether ‘emergency measures’ should be taken against Myanmar over a genocide complaint against Rohingya Muslims.

Chinese intelligence also established the United Liberation Front of West and Southeast Asia (ULFWSEA) in Myanmar. By using the sub-conventional card, China holds the answer to counter investments by other countries in Myanmar, like Japan and the US with latter interested in Myanmar’s Rakhine State. An example of how instability can effect investments is the recently cancelled summit at Guwahati between Prime Minister Narendra Modi and Japanese Prime Minister Shinzo Abe due to violence of India’s own making.

Ahead of Xi’s visit, his article titled ‘Writing a New Chapter in Our Millennia-Old Pauk-Phaw Friendship’ appeared in Myanmar media, salient points of which include:

•  China and Myanmar are connected by shared mountains and rivers. As early as 4th century BC ancestors began to trade with each other through the ‘Gold and Silver Road’ linking China’s Sichuan and Yunnan provinces with Myanmar and India,

•  In 1949, Myanmar was the first of countries with a different social system to recognize New China.

•  In 70 years of our diplomatic ties, both countries have championed and practiced the Five Principles of Peaceful Coexistence.

•  In the 1960s, Myanmar was first among China’s neighbors to settle the boundary with China.

•  China has been Myanmar’s largest trading partner and most important source of investment – bilateral trade reached US$16.8 billion in first 11 months of 2019.

•  Myanmar being important partner of BRI, both sides have signed cooperation documents for building the China-Myanmar Economic Corridor (CMEC) and established a joint CMEC committee to oversee implementation.

•  Deepen results-oriented BRI cooperation moving from conceptual to concrete planning and implementation in building the CMEC.

In backdrop of the above article oozing sugar and spice with everything nice, and armed with the sub-conventional knife behind his back, XI arrived in Naypyitaw on January 17 for a two-day state visit. Xi showed support for Aung San Suu Kyi accused for human rights violations by the West and also met the army chief accused of overseeing genocide against Rohingya Muslims. Significantly, neither the West nor the UN has anything to say about the massacre of Hindu population in Myanmar carried out by Rohingyas despite ample evidence availble. China has defended Suu Kyi’s government in forums such as the United Nations and Myanmar has returned the favor by following Beijing’s positions on issue like  China’s claims over territory in the South China Sea. Xi also met leaders from political parties in ethnic areas ridden with civil conflict where Chinese infrastructure projects are under way.

During Xi’s visit, China and Myanmar  exchanged MoUs, letters and protocols covering 33 projects in the fields of information, industry, agriculture, security and the resettlement of internally displaced people in Myanmar’s Kachin State that borders China. The most significant agreement was a concession and shareholder’s agreement for the Kyaukphyu Special Economic Zone on the Bay of Bengal. With a deep-water port, it is the terminus of the 1,700-kilometer- (1,055-mile-) long China-Myanmar Economic Corridor, a major link in Beijing’s BRI Initiative connecting China’s Yunnan Province. Other agreements covered separate projects related to the corridor plan, which includes oil and gas pipelines, and road and rail projects from southern China through various parts of Myanmar to Kyaukphyu.

The main focus was on the BRI and implementation of the CMES viz  Kyaukpyu Special Economic Zone, the China-Myanmar Border Economic Cooperation Zone and the New Yangon City. Suu Kyi called China “a great country playing an important role in the international affairs and the world economy” but urged for economic projects that avoid environmental degradation and benefit local people. No major new projects were discussed or agreed to. They controversial US$3.6-billion Beijing-backed Myitson Dam project was not discussed where work has been stalled since 2011. Xi would have calculated that Myanmar may consider this as China trying to force itself on Mynamar, besides it woukd be cautious about Chinese investment with elections planned in later part of 2020. China anyway follows the policy of gradually swallowing the target country so as not to raise concerns. Xi’s current objective therefore was to realize its mega-infrastructure goals, locking further progress in the  coming months.

China’s aim in Myanmar is very clear, which includes:

•  Establish BRI in Myanmar similar to that in Pakistan.

•  Daw Myanmar into its own strategic sphere to the point of subjugating it.

•  Enable bypassing the choke point of Straits of Malacca to maximum possible extent.

•  Eventually force India into the BRI initiative that it has been resisting till now and accept supremacy of China-centric Asia.

India is transferring a Kilo-class submarine to Myanmar and is building multiple infrastructure projects including pre-fabricated huts for Rohingya refugees. However, Chinese strategic activities in Myanmar need to be monitored by India and its strategic partners.