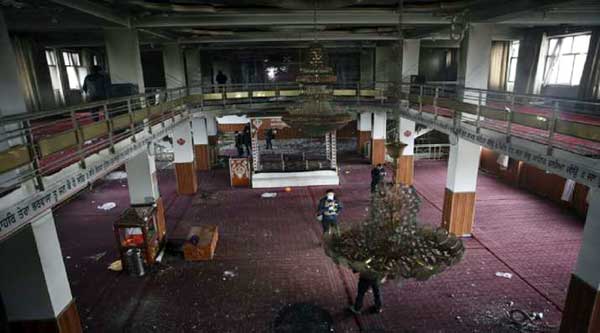 The Pakistani hand in the Kabul Gurdwara terror attack has just been confirmed. The dastardly attack on March 25 by four-terrorists killed 27 Sikhs and a follow up bomb blast close to the crematorium where the dead were being cremated caused some injuries.

The Islamic State (IS) claimed responsibility and posted the picture of Abdul Khayum@ Abu Khalid for having bombed the Gurdwara to avenge violence against Muslims in India. Abu Khalid is a Keralite who joined IS in 2016-2017 and was on NIA radar since 2017. Sikhs were warned to leave Afghanistan or be prepared to die.

Initial news reports had stated the terrorists wanted to attack the Indian Embassy but having failed went for the Gurdwara. This doesn’t appear to be the case because the embassy has been targeted previously too which is in a safer zone whereas the Gurdwara attacked is located in Shor Bazar. Besides, arms, ammunition and explosives were recovered in vicinity of the terror attack.

The attack was timed one day after US Secretary of State Mike Pompeo announced during his visit to Kabul that US would cut $1 billion aid to Afghanistan if President Ashraf Ghani and CEO Abdullah Abdullah (who also declared himself President) don’t resolve differences over the election results. But Pompeo’s visit was more to pressure Ghani to release 5000 Taliban prisoners in exchange for 1000 ANSF prisoners albeit the US-Taliban deal never took Afghan Government in confidence in arriving at this exchange figure.

It is quite likely that Pakistan which has been supporting the Taliban and Haqqanis (latter another face of Al Qaeda) had recommended to US Special Envoy Zalmay Khalizad that release of minimum 5000 Taliban was essential to get the Taliban agree to talk to the Afghan Government. The UNSC condemned the attack on the same day. There was no separate statement by the US.

Afghan security forces have just succeeded in arresting Malawi Abdullah@Aslam.Farooqi, so-called emir of ISKP, who masterminded the terror attack on the Kabul Gurdwara. The arrest was made in Kandahar with 19 of his associates. Aslam Farooqi, a Pakistani national, belongs to the Mamozai tribe of Pashtuns inhabiting the Orakzai Agency in FATA along the Afghanistan-Pakistan border. While Pakistan will continue to deflect such terrorist attacks on the ISKP, it is important to understand the origins of this organization.

With respect to the ISKP the US intelligence had stated in early 2015 that it was an “amalgamation of primarily disaffected and rebranded former Afghan Taliban and Tehrik-e-Taliban Pakistan (TTP) members”. But what remained unsaid was that they had coalesced under aegis of Pakistan’s ISI and possibly had ISI and Pakistani regulars and cadres from its Mujahid battalions incorporated in covert mode.

Surprise is being expressed in some quarters that Aslam Farooqi being formerly from LeT is a new development since earlier commanders in ISKP were from TTP or Afghan Taliban-Haqqanis. This certainly is not a new development. Past few years the UN Assistance Mission Afghanistan (UNAMA) has been reporting that majority of casualties in Afghanistan are being caused by anti-Afghan government forces – Taliban and organized armed groups including (LeT, Jaish-i-Mohammed (JeM), Haqqani Network, Hezb-e-Islami, Islamic Movement of Uzbekistan (IMU), Islamic Jihad Union (IJU), ISKP and other militia and armed groups.

It does not require special intelligence to decipher that Pakistan-based terrorist groups like Let, JeM, Sipah-e-Sahaba etc could not be operating in Afghanistan independently. In fact this was perhaps one reason to organize the initial ISKP formation of about a brigade size in Peshawar region and pushing it west into the Nangarhar Province of Afghanistan.

This ISKP formation had cadres from many Pakistan-based terrorist organizations including LeT. LeT’s own origins lie in Kunar Province of Afghanistan. Afghans at that time called it an ISI Brigade, not ISIS or ISKP.

Pakistan was providing terrorist training to youth from India, Sri Lanka, Bangladesh and Maldives even before the formation of ISKP. Later, cadres from ISIS in Iraq-Syria under attack began joining up in Afghanistan, the conduit for which again was Pakistan.

The US has generally looked the other way, issuing perfunctory warnings to Islamabad, despite Pakistan being responsible for large number of US-NATO casualties in Afghanistan. This because of sustenance of these forces is through Pakistani territory and the vain hope that Pakistan would help US troop exit from Afghanistan without much damage. But another major reason also was the CIA-ISI links that enabled use of Pakistani terrorist organizations to further US interests.

Michael Flynn, former Director US Defense Intelligence Agency and briefly NSA to President Donald Trump had publicly stated that the rise of Islamic State and Jabhat al-Nusra was willful decision of the US. That is how 10,000 heavily armed ISIS terrorists, trained in Turkey by supposedly former British officers and mercenaries (as later acknowledged by CIA), suddenly emerged to capture Mosul in 2004 and thereafter expanding operations into Iraq-Syria.

Under tutelage of Pakistan’s ISI, TTP had provided around 4,000 terrorists to fight in support of ISIS in Iraq-Syria, also setting up office there. In February 2018, major ISIS/ISKP movement was reported in Afghanistan; some 10,000 cadres that included Algerian and French fighters from Iraq-Syria, as also Uyghur fighters. Large presence was reported in Badakshan region of Northern Afghanistan.

Badakshan area region west of Wakhan Corridor and adjoining Tajikistan is important with Russian military presence in Tajikistan and Chinese plans to assist setting up a brigade base for Afghan National Army there, which will likely have PLA presence in garb of construction and training.

In January 2019, Russian Deputy Interior Minister Igor Zubov stated that unidentified helicopters transported a large number of Daesh (Islamic State) terrorists from Pakistan to the border with Tajikistan, which is close to Russia’s southern borders, adding that this ”might stage massive provocations that would result in huge amounts of refugees fleeing the territory. This would have an impact on Russia.”

Earlier, Andrey Novikov heading the CIS Anti-Terrorism Centre had also stated that IS terrorists were being transported to Afghanistan and Pakistan after facing defeat in Syria and Iraq. Such an action without Washington-Islamabad involvement was hardly possible.

Pakistan is safe haven for terrorist organizations like ISKP, Al Qaeda, LeT, JeM, Al Qaeda, Lashkar-e-Omar, Sipah-e-Sahaba, Harakat ul-Mujahideen, Al Badr Mujahideen, and host of others. But Pakistan vociferously denies providing safe haven to any terrorist groups. Yet in July 2019, Pakistani Prime Minister Imran Khan visiting the US claimed the presence of 30,000 to 40,000 armed terrorists in his country.

If this is not providing safe haven, what is? Fact remains that sitting in Beijing’s lap Pakistan’s terror industry is running full steam. Not only is the arrested Aslam Farooqi a Pakistani national, so was AQIS chief killed last year (successor not yet announced who too would be Pakistani) and Ataullah abu Ammar Jununi heading Arakan Rohingya Salvation Army (ARSA) operating in Rakhine state of Myanmar – all supported, funded and armed by Pakistan. Much that we may take solace on the internal situation of Pakistan, terrorism wise it is having a ball.

Right now the US is readying to surrender Afghanistan to the Taliban on the promise (sic) they will not let Afghan territory be used for attacking the US and US interests. But wonder if Donald Trump has noticed that rules of war have changed. Capitol Hill may do well to examine how the 2,50,000 strong gathering organized in early March by the Tablighi Jamaat in Lahore, despite the so-called lockdown, has managed to export China Virus abroad, how many travelled to the US directly from Pakistan or via another country, even as Pakistan Muslim League-Q, coalition partner of Imran Khan’s Tehreek-e-Insaf, has lent support to the Tablighi Jamaat?

While the focus is on China Virus, it would be well to acknowledge Pakistan is not just the Dragon’s nuclear talon, it has developed a biological sting too.