Chemical Attacks – may not be too distant 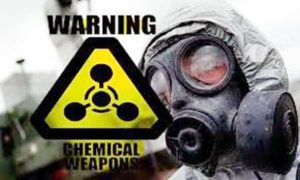 Britain’s Minister of State for Security Ben Wallace has warned on October 9 that “Chemical and Biological weapons are marching in closer”, terrorists have prepared better arsenal and country must be prepared to face such attacks. Underlining that there is no doubt over the reality of the threat, Wallace stressed that “our open, liberal and free societies are easy prey to those that fear little and care even less”. A team of British experts revealed terrorists have developed tools to determine casualty exposures through rapid tests, use of drones to measure toxicity in the atmosphere and crisis communication instruments to stop fake news. The terror threat level in the UK is “severe”, which means that a terror attack is highly likely.

During a recent TV discussion on Pakistani TV, Amjad Shoib, a retired army three-star general openly hinted at strategy of massacring Indians using suicide bombers in Kashmir. The Pakistani army would actually like to do so pan-India, as also employing car/truck bombings. It maybe recalled that in July 2016, Asim Umar, AQIS head, issued an audio message and written statement urging Muslims in India to undertake ‘lone wolf’ attacks to target senior IPS and IAS officers, saying Indian Muslims must follow the example of youths in Europe and strike against Indian police and senior officials. According to him, senior government officials should be held responsible for communal violence, adding that the state and its departments were equally responsible for the incidents against Muslims in India and senior officials must be targeted to cause financial loss to the government and start riots in the country.

Asim Umar studied at the Jamia-ul-Islamia in Karachi and later at the Darul Uloom Haqqani in Khyber Pakhtunwala (KPK). Darul Uloom Haqqani is also known as the ‘University of Jihad’ where notorious radicals like Mullah Mansour Akhtar and Sirajuddin Haqqani have been past alumni. Asim Umar had reportedly joined Harkat-ul-Jihad (HUJI) after he travelled to Afghanistan and met Osama bin-Laden. Later, Asim Umar facilitated bin Laden’s move to the safe-house in Abbotabad, Pakistan where he lived undetected for years before US forces killed him. HUJI during that time had branches in Kashmir, Bangladesh and Myanmar. So, it is no surprise that Zawahiri picked up Asim Umar to head AQIS, South Asia especially after he appeared prominently in Tahrik-i-Taliban Pakistan (TTP) propaganda videos post the Lal Masjid incident and later headed Al Qaeda’s Sharia Committee in Pakistan. It wouldn’t be surprising if Umar is close friend of Imran Khan.

In Bandipora, J&K, after security forces gunned down two terrorists on September 20, 2018, the Lashkar-e-Taiba (LeT) issued a statement on September 23 that chemical weapons were used to kill these terrorists. Abdullah Ghaznavi, spokesperson of LeT was quoted in saying, “The Indian army has crossed all limits. The use of chemical weapons and destroying the houses is strongly condemnable. It is the worst kind of human rights violation. It was due to the chemical weapons that the bodies of both the martyrs were completely destroyed. Not only this, but the army further damaged the bodies apart with weapons, which is unquestionably the worst example of war criminality”. Ghaznavi sought intervention of the international organizations towards “such clear human rights exploitations” by India, and added that those resigning from police are welcome: “They must keep their resignation letters with them as proof.”

The regional newspapers in J&K picked up the story and one should expect the social media and segments of national-level print and electronic media aligned with Pakistan to highlight this at some time to show Indian security forces in bad light, as has been the norm.  The Indian Army does not possess chemical weapons so the question of these being used doesn’t arise. It is significant to note that while terrorist organizations like LeT issue statements almost instantaneously after any action, in the instant case the two terrorists were killed on September 20 and the LeT statement was issued on September 23 – full three days later, indicating it is an afterthought. There could be many possibilities for the delayed LeT statement, like: reaction to India rejecting Imran Khan’s proposal for foreign ministers of both countries to meet on  sidelines of the UNGA meet in New York; purported mutilation terrorists bodies as sequel to abduction, torture and killing of BSF Head Constable Narendra Kumar;  raising human rights issues in wake of visit of António Guterres, UN Secretary General, to India, and; maybe even to influence affidavits by 756 Indian Army officers in the Supreme Court against filing of FIRs.

Pakistan has been using chemical weapons in Balochistan for decades, which has not been highlighted much in Indian media despite enough available evidence from open sources. Now that Pakistan is under pressure for inadequate measures to curb terrorism, Pakistan may like to build a narrative that India too is using chemical weapons in J&K, which would also help internationalize the J&K issue more.  But the most dangerous possibility is that Pakistan may arm terrorists with chemical weapons. The mating of a radical Prime Minister with a radicalized military is a dangerous mix. If Pakistan issues commemorative stamps for terrorist killed in J&K as heroes, she is quite capable of saying that chemical weapons have been procured by ‘freedom fighters’ in retaliation to Indian Army using such weapons. Even during the Kargil Conflict in 1999, Pakistan army’s RPG-7 detachments were equipped with chemical rounds and gas masks. Bodies of at least two of our soldiers killed in action bore signs of chemical attack.

Because of its economic mess and various pressures, Pakistan should be expected to seek desperate diversions – arming terrorists with chemical weapons being one form. Sporadic chemical attacks have happened in the past even in countries like Japan and the US but a century after World War I, chemical weapons have become the new normal in West Asia, particularly Syria where ISIS too has been using chlorine mortar bombs. Use of chemical weapons by terrorists implies that the ‘psychological’ quotient of the terror attack goes up exponentially especially if troops are unprepared for a deadly gas strike. The government and the security sector need to examine such contingencies, not  dismissing them since they haven’t occurred yet. When it does happen, the Pakistani propaganda machinery can be trusted to put the entire blame of use of chemical weapons on Indian security forces.

Terror attacks in J&K have become more focused after the new government in Pakistan has taken over. The LeT and Hijbul Mujahideen (HuM) have been active along with other terrorist groups. The Jaish-e-Mohammed (JeM) that had carried out the terrorist attack on the Army base in Uri in September 2016 is likely to be back in J&K in major way with firm indications it is expanding activities in Pakistan under tutelage of Imran Khan. Targets for chemical attacks could be population centres and military installations for maximum psychological effect but their holding and storage is more likely to be in the five odd radicalized districts which are witnessing most violence including abduction and killing of army personnel and policemen even on leave. The fear psychosis is working with men and women in police quitting their jobs, even as government may like to downplay such news.

Recently, Mohammad Sadiq, PhD scholar-chemist, was arrested in Indore with 10 kg of Fentanyl Hydrochloride that can kill 50,00,000 people. Fentanyl is an opioid which is highly potent, spreads fast, can be absorbed through the skin or inhaled; a dose of just two milligrams is enough to kill a person. The arrest was made when an illegal laboratory was busted; being run by a local businessman in conjunction with Mohammad Sadiq. A Mexican national who is believed to have supplied the knowhow and the raw materials needed for beginning production of the highly toxic drug was also arrested. The seizure has reportedly baffled scientists and raised alarms for the security agencies because production of Fentanyl Hydrochloride  requires expertise which is available only to trained scientists and high-end research laboratories.  Sadiq and the Indore illegal laboratory set up is supposed to be “anti-US” but discounting any link with radical elements within the country would be foolish.

As Pakistan continues with its terror export and calibrates its thousand cut policy against India, it would be prudent to be prepared for possibility of ‘lone wolf’ attacks, car/truck bombings and chemical attacks pan-India. Three years before the terrorist attack on our Parliament, the National Security Council Secretariat (NSCS) had done a comprehensive pan-India study listing out possible terror targets – in case of Delhi, Parliament was top priority. Yet when the attack occurred, we were quite unprepared. Let us not be caught napping again.