Change of Guard in Islamabad 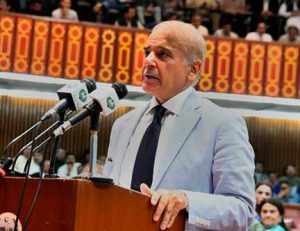 Shehbaz Sharif is the new Prime Minister of Pakistan; elected unopposed on April 11 after the political drama over the past week. His mother’s family originally was from Pulwama in J&K. His father, Muhammad Sharif was from Anantnag in J&K who had migrated to Jati Umra Village in Amritsar. His parents moved from Amritsar to Lahore at the time of Partition. After the military coup by General Pervez Musharraf in 1999, Shehbaz along with family spent years of self-exile in Saudi Arabia, returning to Pakistan in 2007.

Shehbaz has taken over the reins of Pakistan at a time when the economy is in doldrums, the country is debt-trapped by China…

While in exile in Saudi Arabia, Shehbaz was elected as the President of PML-N in August 2002 and moved to the United Kingdom in mid-2003 for medical treatment. A politician-businessman, Shehbaz was the longest serving Chief Minister of Punjab having served three tenures and since August 13, 2018,  and has been serving in Pakistan’s National Assembly as Leader of the Opposition. Shehbaz owns the ‘Ittefaq Group’, a multimillion-dollar steel conglomerate in Pakistan, jointly with his family. He also owns some 83 acres of farmland, four non-agricultural projects in Pakistan and a house in London.

In September 2020, Shehbaz was arrested by the National Accountability Bureau for money laundering of over Rs7,328 million involving his close associates and family members. Earlier, the NAB had frozen 23 properties belonging to Shehbaz, his son, and other family members. The NAB alleged that the Shehbaz Sharif family used fake transactions to receive foreign funds. On April 14, 2021, Shehbaz was released on bail by the Lahore High Court. Whether this was a case of political vendetta by the Imran Khan government is not known.

Shehbaz has taken over the reins of Pakistan at a time when the economy is in doldrums, the country is debt-trapped by China, the Tehrik-i-Taliban Pakistan (TTP) has gained sizable territory in North Waziristan and has launched the Spring Offensive. The Baloch Liberation Army (BLA) is also attacking the Pakistani military security establishment. There is anger in Sindh, including in the Muttahida Qaumi Movement (MQM) and Pak Sarzamin Party (PSP) that claims to represent the Urdu-speaking population of urban Sindh, over the language bill and the manner in which the PPP government in Sindh is seeking to control Karachi, by drastically limiting the powers of local government which primarily represents rural Sindh. The MQM has called the Sindh government’s policies ‘racist’ and ‘biased’.

Shehbaz was known for his banshee like gestures, histrionics and violent hand movements hitting mikes as Leader of the Opposition. Like other Pakistani politicians, he had protested when India revoked Article 370 in J&K on August 6, 2019.  Addressing the National Assembly on April 11 after being elected the new Prime Minister, Shehbaz stated that one cannot choose ones neighbours – same as what Prime Minister AB Vajpayee had one said. Shehbaz then went on to say, Pakistan did not indulge in diplomacy to stop all the bloodshed in Kashmir after Article 370 was abrogated. He also said that for good relations with India, the Kashmir issue must be resolved.

…experts from both China and Pakistan are confident in the future of the China-Pakistan ties, as they believe the new government will continue to uphold the country’s long-standing tradition to make sure the friendship with China…

Prime Minister Narendra Modi congratulated Shehbaz for being elected prime minister and tweeted: “Congratulations to H. E. Mian Muhammad Shehbaz Sharif on his election as Prime Minister of Pakistan. India desires peace and stability in the region free of terror, so that we can focus on our development challenges and ensure the well-being and prosperity of our people.”  Prime Minister Shehbaz Sharif thanked Prime Minister Modi and tweeted: “Thank you Prime Minister Narendra Modi for felicitations. Pakistan desires peaceful & cooperative ties with India. Peaceful settlement of outstanding disputes including Jammu & Kashmir is indispensable. Pakistan’s sacrifices in fighting terrorism are well-known. Let’s secure peace and…”

There is speculation in the media what Pakistan’s relations with China and India will be during the Sharif regime. As far as China goes, Pakistan is already debt-trapped by Beijing , the China-Pakistan Economic Corridor (CPEC) and associated projects are a reality, and so is the lease of Gwadar to China. Pakistan has become a vassal state of China and can only move further into China’s grip. Also, Pakistan will keep its lips sealed on Chinese genocide against Uyghur and Muslims in Xinjiang.

Above are the reasons is why the Chinese media says that change of government in Pakistan will not affect the solid friendship between China and Pakistan, and experts from both China and Pakistan are confident in the future of the China-Pakistan ties, as they believe the new government will continue to uphold the country’s long-standing tradition to make sure the friendship with China and all China-Pakistan cooperation projects will be unaffected.

Shehbaz Sharif has been denouncing minority killings of Hindus and Christians in his country. He has also greeted Hindus and Sikhs in Pakistan on festivals like Holi. To this end, he has multicultural outlook. His elder brother Nawaz Sharif as Prime Minister of Pakistan also strived for good relations with India. During the 2013 election campaign, Nawaz had also spoken of improving relations with India, which saw him return to power as prime minister for a third time. It may also be recalled that in 2015 Prime Minister Narendra Modi had made a surprise visit to Lahore, visited Nawaz Sharif’s home and attended his granddaughter’s wedding in December 2015.

But the undeniable fact is that the Pakistani army controls the foreign and defence policies of Pakistan whether there is military rule or not. It may be recalled that when then Prime Minister Atal Bihari Vajpayee travelled by bus to Lahore and was received by Nawaz Sharif, his army chief Musharraf was busy with intrusions in the Kargil Sector. Besides, whenever a Pakistani delegation came to India for talks, the Pakistani military upped ceasefire violations, infiltration and terror attacks.

Imran’s ouster came because he got on the wrong side of the army.

There is no way the Pakistani military will give up terrorism and enmity with India in order to continue its grip on Pakistan. The recent news of Hafiz Saeed awarded 32 years imprisonment for financing terror must be seen in the backdrop that he has been given prison sentences many times in the past, to be overruled by higher courts. Besides, prison for terrorist leaders in Pakistan implies red carpet treatment with no check on movement and visitors. His son Talha Hafiz anyway is second-in-command of the Lashkar-e-Taiba (LeT).

Pakistan’s polity and military has support of China on its Kashmir stance, as was more than apparent from Chinese foreign minister Wang Yi’s remarks at the OIC meet on Kashmir in Pakistan recently organized by Imran Khan. Therefore, there will be no let up on Pakistan’s illegal claims on Kashmir and the proxy war on India. China had supported Imran’s installation as prime minister because he and his political part, Pakistan Tehreek-e-Insaf (PTI) were earlier against the China-Pakistan Economic Corridor (CPEC). But this changed after Imran became prime minister, so he is of no further use to Beijing, who know the real power is with the Pakistani army.

Imran’s ouster came because he got on the wrong side of the army. Shehbaz enjoys cordial relations with the army. Moreover, of the 174 legislators who unanimously voted to appoint him the prime minister, the number of PML (N) legislators was only 36. Shehbaz will be heading a coalition government and will be more cautious with Imran Khan shouting on the sidelines for early elections.

Finally, Shehbaz may want to improve relations with India but he will have the same constraints as his elder brother – Nawaz Sharif. Prudence demands we let events run their course not unduly raise expectations.