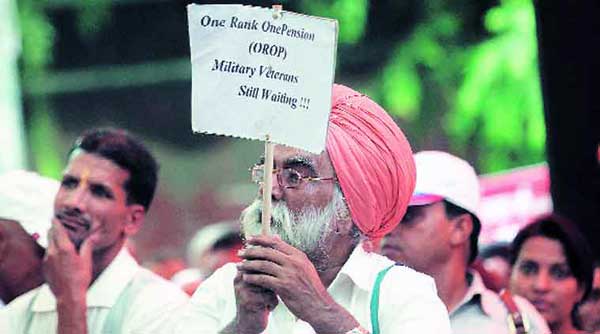 As if the lies of a purported army coup by a journalist in 2013 were not enough, not prosecuting him had the obvious fallout for inviting more such acts. So, now we have a former IB officer, President of a so called ‘Patriots Forum’, advising the government to strategize and put in place anti-coup measures because of the peaceful veteran protests at Jantar Mantar, even going to the extent of suggesting that Indian Armed Forces could surrender like the Pakistani army in East Pakistan during 1971 and Japanese army in WW II. Obviously such ill considered statements by self-appointed strategist are deliberate, with a malicious motive and could be on behest of his handlers.

‘Patriots Forum,’ has been circulating on the web that the government should ‘keep close watch on those suspected to be fermenting the issue unnecessarily’… And so, the government will be well advised to strategize and prepare anti-coup measures …”

With reference to the veteran protests against the delay in implementation of OROP, an organization, called ‘Patriots Forum,’ has been circulating on the web that the government should ‘keep close watch on those suspected to be fermenting the issue unnecessarily’.  He goes on to say, “It seems things have reached a stage when it is going on its own motion. And so, the government will be well advised to strategize and prepare anti-coup measures though such things are unlikely in such big country as ours.” This coming from the President of the Patriots Front, a former IB officer raises a terrible stink. Wonder if he realizes that these peaceful protests are by veterans, not serving military. Besides, the issue of OROP was never raised by the armed forces with any pay commission – this being a strictly a demand of veterans.

The website of Patriots Forum does not give any details about who manages the forum, but certainly it could be set up by forces inimical to India, to exploit and hit at the military and in turn national security by creating distrust against the Armed Forces. What better cover than the name ‘Patriots Forum’ and what better arrangement than the organization headed by a former IB man who no one will suspect, with his links with the bureaucracy and the polity by virtue of his service in the intelligence. After all, haven’t we had cases of officers in R&AW and IB defecting abroad and others leaking intelligence, so the links and possibilities are always there? One wonders if Patriots Forum is an NGO and what is their source of funding? The fact remains that the organization must come clean and explain to the public on what basis is the President of the Forum recommending the government to strategize and prepare anti-coup measures? What are the anti-coup measures he recommends; water cannons to be fired against 200 odd veterans on a peaceful relay hunger strike at Jantar Mantar or a lathi-charge by police and CAPF? Was it also his advice to the previous government that led to water cannons being used against a former Army Chief and 7-8 veteran General Officers going to lay one wreath at the Amar Jawan Jyoti at India Gate, even as the then Home Minister Sushil Shinde squeaked insidiously in Parliament “we have no jurisdiction in the area” when a Chinese patrol pushed back CAPF directly under the Home Ministry and sat 19 kms inside Indian  Territory at Raki Nala in Depsang Plains of Ladakh?   The antecedents of the so-called Patriots Forum and its President and Co certainly need some serious investigation.

Hopefully, action would be taken to stop such treasonous rumour-mongering by such traitors. These are serious attempts to hollow the country from the inside.

What is more, despite the Prime Minister’s statement of being committed to OROP, the President of the Patriots Forum declares OROP is “not implementable”. Is this fellow implying the Prime Minister is a befooling the country? By the way does this spook know that the Indian Railway, whose manpower is as large as the Indian Army, has had same benefits as OROP for past several years even as the nomenclature OROP has not been specifically mentioned? Will he recommend to the government that such benefit be revoked for Indian Railway? He wrote, “If Veteran’s protest at Jantar Mantar on June 14, it will be a “BLACK DAY” in the military history of India”. Was this fellow bedding his handlers when so many similar protests and hunger fasts were taken up by veterans at Jantar Mantar during the Congress rule? Is he making such fallacious statement on behest of another political party, arms mafia or foreign handlers and funding.

He goes on to say that “A field report from a responsible friend suggests that the middle-ranking officers are “fuming”, alleging that this was all because of the bureaucrats in the ministries”. Since when do retired IB officers get field reports, who is this “reliable” friend, and which middle ranking officers is he talking about – serving or veterans? Is he secretly getting IB reports after retiring to pass on to the ISI? Another of his comment is that officers draw a decent pension and should have no grudge? What is the definition of decent pension for this self appointed economist and does he have any idea what the 90 year old veteran sitting at Jantar Mantar receives as pension? Is he trying to showcase that OROP is an officer related problem even as 99 percent affected are JCOs and below?

But the most damning and treasonous statement of President of the Patriots Forum is, “It is often said that the defence or safety of the country is too important to be left to the armed forces alone. The government has to take into consideration a lot more things before a decision is taken. In this, the government will have to think about, and we are certain it does, what would be in the best interest for the countrymen. That is the reason why a losing side in a war formally surrenders (latest example before us is the surrender of the Pak army in Indo-Bangladesh war in 1971) to save the countrymen from further devastation. So, had happened in Japan after the Hiroshima bombing”. It is quite apparent this geek is not only trying to establish distrust against the armed forces but also drive a wedge between the military and police forces.

It is not known whether he is steeped in the Nehruvian theology that Armed Forces are redundant and should be disbanded or his rise in IB was courtesy his handlers but his intellect is certainly pitiable if he thinks that Indian Armed Forces would surrender to an invader because of non-implementation of OROP since that is what he seems to suggest. Reportedly, all this has also been communicated to the Prime Minister by this fellow. Hopefully, action would be taken to stop such treasonous rumour-mongering by such traitors. These are serious attempts to hollow the country from the inside. As someone said, “Forget Motherland, some will even sell their Mother for a price.”

4 thoughts on “Canards of Military Coup – another James Bond”