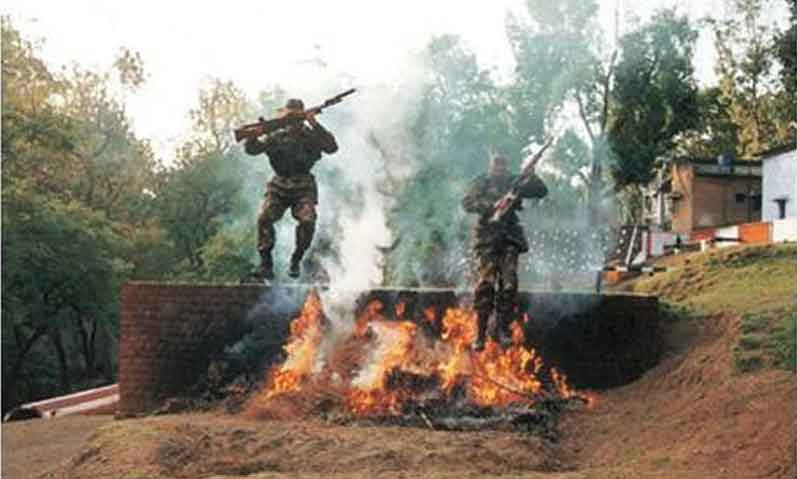 According to media reports, the Indian Army is in the process of undergoing cadre restructuring. In the case of officers, two officers per battalion are being reduced, which will total up to an overall reduction of some 4,500 officers. In 1995, Japan’s Self Defense Forces went in for a 10% manpower cut across the board, which attracted many accolades. But the fact was that for past several years this was a constant deficiency in manpower.

On June 24, 2019, Defence Minister Rajnath Singh in a written reply to Rajya Sabha stated that there were 45,634 vacancies in the Army as on January 1, 2019, including 7,399 posts which are above the rank of Lieutenant. In fact in past years, Army’s officer shortages have seldom gone below the average of 7000, going up to even 9000 some times.

Hence, the claim that reducing officer strength by some 4500 officers will save on pay and allowances of that many officers is much ado about nothing. After reducing the authorized officer strength, we may seek solace in  percentage shortages having gone down but that does not change the fact that the Army is no more the preferred choice of youth for reasons well known: harsh service conditions and everyday risk to life; pay and perks lower than civil services and now even police forces; attractive pay and package in the corporate sector; lowering of precedence and prestige of soldiers; government antipathy towards Armed Forces, and; army hierarchy placing curbs on soldiers (which are not in Navy and IAF) and acting against interests of soldiers, disabled, widows and veterans to show allegiance towards government antipathy, kowtowing to a  jealous bureaucracy.

Celebrated war veteran Major General Ian Cardozo, AVSM, SM narrates an incident of his interaction with TCA Raghavan, India’s former High Commissioner to Pakistan, during a seminar at the Lal Bahadur Shastri Academy at Mussoorie in March 2018. Noticing latter’s attitude, General Cardozo said to him “Mr Raghavan it looks like you hate us!”

The 1982 batch bureaucrat Raghavan responded by saying, “General don’t you know? We hate you! We have always hated you!” View this in backdrop of the political hierarchy totally dependent on bureaucrats  exclusively manning the Ministry of Defence Prime Minister Narendra Modi  reviewing the ‘Ek Bharat, Sheshtra Bharat’ on October 12, told top bureaucrats present at the meeting that they had spoiled his first five-year tenure.

Imagine how bureaucratic hatred for Armed Forces over past seven decades plus has harmed and denigrated the military, and there is no move to overhaul MoD.  Therefore, officer shortages will persist despite the Army reportedly spending some Rs 8 cr annually on publicity to attract youth.

Other measure as part of cadre restructuring include: Direct Entry in IMA for officers is to be stopped – NDA entry only to provide Regular Officers; Short Service / OTA entry to be increased – only 25% to be subsequently given Permanent Commission; Lt Col to Col promotions to be increased from current 35-38% to about 55-60%; Col to Brig promotions to be reduced from current 35-38% to about 25-30%; Brigadiers to be automatically promoted to Maj Gen after 2-3 yrs but  both ranks of Brigs and Maj Gens to be placed in same Pay Level 14; Brigs ranks to be worn while commanding Brigades, serving in Tri-Service organizations, on deputation postings and foreign assignments; Time Scale (TS) Col for Non Empanelled (NE) Lt Cols in 23 yrs and TS Brig for NE Cols one year before their retirement; Staff Stream to start from Col onwards; about 20% reduction of officers in Delhi, including four ADGs – only Cols and above to be posted to Army HQ in Delhi; most of Sub Area HQ to be abolished and responsibilities transferred to Corps HQ.

The above measures for cadre restructuring need to be examined more closely. The NDA has not been receiving entrants to its full capacity. In fact, there are many cases of cadets opting out after joining NDA even when they are made to pay financial penalty. So we may be looking at more shortage of officers and still smaller percentage of permanent commissioned officers vis-à-vis Short Service officers. Direct Entry in IMA provides entry to youth of higher age group who decide to join Army over other professions. This entry helped contribute to filling training capacity of IMA.

An analysis of performance of Direct Entry level officers would indicate this category has performed equally well as others, if not better albeit some query why only NDA entry officers are promoted to Army Chief? Brigadiers are to be automatically promoted to Maj Gen after 2-3 years service, with both remaining on same pay band.  But with Col to Brig promotions reduced from current 35-38% to about 25-30%, it is likely to result in the pyramid becoming even more acute vis-à-vis other services, especially civilian-defence officers, posing greater inter-se functional problems.

As for the policy of posting only Cols and above to Army HQ, this policy has already been in vogue or rather officers below Col rank are in negligible number, if at all. In the case of Sub Areas, the Army needs a long-term policy about such organizations. First Sub Areas were upgraded to Maj Gen command and expanded, and now “most” are being shut down. This will likely create a plethora of problems.

Most Sub Areas are deeply involved in land issues including encroachments. Abolishing Sub Areas will benefit the squatters and encroachers, most of who are politicians or politically connected, as also the builder mafia. It is no secret that careers of Sub Area Commanders who initiated action against defence encroachments were sealed and prematurely moved out by the powerful mafia.  Shutting down Sub Areas would naturally also benefit politician wannabes, especially those who helped their closure since opening cantonment properties to private players has enormous vote-bank potential.

With the former Defence Minister Nirmala Sitharaman’s move to take over prime land in military cantonments, how can Corps HQ be expected to deal with acquiring the in lieu land being offered hundreds of km away when existing Sub Areas are unable to do so even nearby?

Take the example of Raipur Sub Area which past decade plus has not been able to acquire land offered for the Special Forces Training School. Veterans may have become outcasts for the army hierarchy but veterans, widows and serving soldiers on leave, do need to liaise with Sub Area HQ for many of their problems.

It is not clear which are the “most” Sub Areas being closed but for example if Dehradun Sub Area is shut, are these individuals expected to travel to the Corps HQ at Ambala to resolve their problems, with the Area HQ located at Bareilly?  The issue clearly needs deeper examination.

Cadre restructuring with respect to JCOs and soldiers include: implementing 3rd Cadre Restructuring of JCOs/OR already approved by Government – additional vacancies for JCOs & NCOs sanctioned by government to be absorbed over five years commencing 2020; about 15-20 soldiers per unit to be reduced – overall reduction of about one lakh in the standing strength; recruitment training period not to be counted as service for promotions/pensions (is it so in Navy, IAF, PMF and CAPFs?); almost every soldier to get promoted to Naik in about 14 yrs of physical service; those unwilling for promotions/ failing in promotion cadres not be given Modified Assured Career Progression (MACP), and; those getting re-employed in DSC not to be given second pension.

The reduction of about 15-20 soldiers in every unit may look small but needs to be seen in conjunction soldiers on leave, courses, temporary duty and hosts of attachments with various formation headquarters.

More importantly, every time statistics are shared with Parliament, Army’s manpower shortages invariably are 40,000-45,000 with statements that these will be made up by recruits under training. Somehow this gap has never been filled. So while we are reducing manpower by 1,00,000, the deficiency of 40,000-45,000 is near constant which affects fighting units.

This needs to be considered in the backdrop of Army’s engagements in counter insurgency, India’s 15,106 km land borders and the pace at which the CAPF are being expanded.