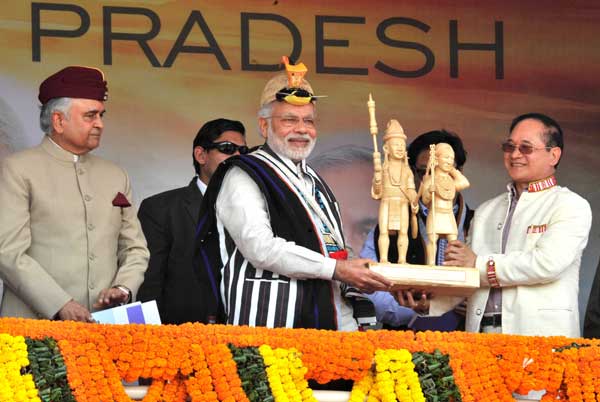 It was a surprise to receive an e-mail from the Press Attache in the Chinese Embassy at New Delhi titled ‘Foreign Ministry Spokesperson Hua Chunying’s Remarks on Indian Prime Minister Modi Attending Activities in Disputed Area of Eastern Part of China-India Boundary, quoting a question “On February 20, Indian Prime Minister Narendra Modi went to the “Arunachal Pradesh” for the “Statehood Day” celebrations. What is China’s comment on this?”, the response of Hua to which was “ China holds a consistent and clear stance on the China-India boundary question.

It is a fact known to all that there are substantial disputes over the eastern part of the China-India boundary. The Chinese government has never recognized the “Arunachal Pradesh”.

It is a fact known to all that there are substantial disputes over the eastern part of the China-India boundary. The Chinese government has never recognized the “Arunachal Pradesh”. The Chinese side is opposed to Indian leaders’ activities in the disputed area, and has lodged solemn representations with the Indian side. What the Indian side has done runs counter to the efforts by the two sides to properly resolve and manage disputes and the overall interests of bilateral relations.

We urge the Indian side to take China’s solemn concerns seriously, meet the Chinese side halfway and commit itself to fairly and properly resolving the bilateral boundary question through negotiation. Pending the settlement of the boundary question, the Indian side should avoid making any move that complicates the boundary question and maintain the good momentum of bilateral ties.” Why this e-mail to me – perhaps to others as well to collect feed back? So my reply was simply this: “China’s claim to Arunachal came out of the blues only in 2005 while earlier it was only Tawang. The expansionist stance of China will lead to opening up issue of China’s aggression of Tibet.”

What Hua ‘failed’ to qualify is how come China made the claim to Arunachal Pradesh as late as year 2005 and was this new strategy to deflect from growing calls to ‘Save Tibet’? How is it that while China capitalized on an old sketch of the Kuomintang (a regime that Mao hounded to Taiwan through his communist forces) and went about claiming areas in South and East China Seas and elsewhere, but even then never talked of any claim to Arunachal Pradesh till one fine morning in 2005? That too, not by Hua’s then counterpart in the Chinese Foreign Ministry but through a squeak by the then Chinese Ambassador at New Delhi. Later, Zhang Yan, Chinese Ambassador to India, best known for his arrogance and jaundiced diplomacy, told an Indian journalist who had asked him a question about Chinese maps depicting the whole of Jammu & Kashmir as Pakistani territory to “shut up”.

It is common knowledge that the Chinese mindset is well rooted in her historical “Tian Xia” (under the heaven) Concept by which China traditionally views “All Territories to territory.  So with China’s claims to East and South China Seas and  racing to the India Ocean via land through Pakistan and Myanmar particularly on to the Persian Gulf and the Straits of Hormuz, will HJ Mackinder’s prophecy in his article ‘The Geographical Pivot of History’ published in the The Geographical Journal, London, 1904 come true wherein he said, “Chinese might constitute the yellow peril to the world’s freedom, just because they would add an oceanic frontage to the resources of the great continent, an advantage as yet denied to the Russian tenant of the pivot region”.

…Ranjit Guha rightly pointed out in saying, “Ever since 1993 when China became a net importer of oil for the first time, China has been publicly declaring its intentions of stepping beyond its traditional continental land oriented security paradigms”.

The repeated claims to 90,000 square kms of Arunachal Pradesh since 2005, besides the “Tian Xia” fallacy is also to establish some sort of legality no matter how fragile. This is abundantly clear when the  Chinese Foreign Minister Yang Jiechi in 2007 stated that “mere presence” in populated areas would not affect China’s claims, even as this statement by Yang was reneging on the provision under Article VII of the April 2005 Sino-Indian Agreement on the Political Parameters and Guiding Principles for the Settlement of the India-China Boundary Question.

This aside, if population is not the criteria to defy Chinese claims then how does China justify her claims to Tibet which it usurped through aggression, as known to the whole world, even as she followed it up with a demographic invasion of seven million Han Chinese overwhelming the six million Tibetan population and continues to date with cultural and even environmental genocide of the peaceful natives and region.

A new high has been achieved in including the teachings of Dalai Lama in the ambit of terrorism. As for reneging on Article VII of the April 2005 Sino-Indian Agreement on the Political Parameters and Guiding Principles for the Settlement of the India-China Boundary Question, this Chinese tactics is hardly new. China reneged to her representative affixing his full signatures, along with the Tibetan and British representatives to the McMohan Line and the Tibet-India border at the Shimla Convention of 1914.

China’s basic problem stems from Mao Zhedong’s statement, later endorsed by Deng Xiaoping, in saying, “Tibet is the palm of China and Ladakh, Nepal, Sikkim, Bhutan and NEFA (now Arunachal Pradesh) are its fingers”. What other reason can you attribute to the annexation of Tibet, spurious claims to Ladakh, Arunachal and Bhutan, not recognizing Sikkim as part of India, and ingress into Nepal – both soft and hard? Besides, former ambassador Ranjit Guha rightly pointed out in saying, “Ever since 1993 when China became a net importer of oil for the first time, China has been publicly declaring its intentions of stepping beyond its traditional continental land oriented security paradigms”.

Lt Gen Lin Yazhou, then Deputy Political Commissar of PLAAF in  January 2005 had stated,  “When a nation grows strong enough, it practices hegemony. The sole purpose of power is to pursue power ……. Geography is destiny ……. When a country begins to rise, it shall first set itself in an invincible position”. What Yazhou failed to define what is that “invincible position”? Is it mere comprehensive national power as Nazi Germany thought. No one other than China would understand it better while assisting and supporting insurgents in India’s northeast and arming Maoists in India.

Hua’s current statement indicates that in wake of or during the forthcoming visit of Prime Minister Modi to China, we may witness more Chinese claims…

Above all a dragon may breathe all the fire and feel invincible, but a small ant in its ear can drive it absolutely mad forcing it to eat its tail despite her nuclearized talons – Pakistan and North Korea.

Hua’s current statement indicates that in wake of or during the forthcoming visit of Prime Minister Modi to China, we may witness more Chinese claims, trans-border incursions-cum-intrusions, bullying statements, and testing-cum-firing of a new or longer range strategic weapon system, as has been the norm during high profile visits from India earlier. It would be interesting to see If President Xi will continue with the Tian Xia Concept or has the power to bunk it going for an amicable, mutually acceptable political settlement of the Sino-India border opening the doors to economic, transportation and energy corridors with India for betterment of people of both countries and the region.