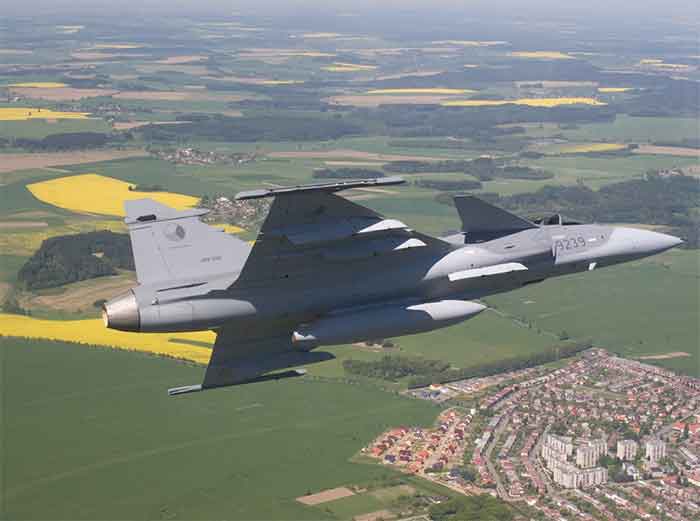 India’s offer to buy 200 foreign combat jets if they are ‘Made-in-India’ has hit headlines. This announcement after concluding the deal for importing 36 x Rafale fighter jets in flyaway condition ex France has caused much excitement for the single-engine, medium fighters to be built here. This deal could be anything from US$13 billion to US$15 billion. And, the actual requirement may go up since making up the IAF’s shortfall through Make-in-India would take considerable number of years that could see more existing holdings of IAF phased out.

Lockheed Martin and Saab have been actively marketing the F-16 Block 70 and the Gripen E respectively, both of which are single-engine.

Presently the IAF is down to 32 operational squadrons against the 45 required. Though IAF has ordered 140 of the indigenous single-engine fighter Tejas, only two have been have been delivered to-date to IAF and there are multiple issues that still need to be overcome.

As per media reports, America’s Lockheed Martin has responded in the affirmative to an IAF letter to global aerospace vendors, soliciting interest in building a single-engine, medium fighter aircraft in India, with full transfer of technology (ToT). Sweden’s Saab has also said it is ready to not only produce its frontline Gripen fighter in India, but help build a local aviation industry base. Lockheed Martin and Saab have been actively marketing the F-16 Block 70 and the Gripen E respectively, both of which are single-engine. Boeing’s F/A-18 E/F and Eurofighter of the European consortium appear to be out of the race since these are twin-engine fighters, not single engine.

By all accounts, Lockheed Martin has also offered to close down its only F-16 production line from the US to India. This implies that once the production line comes to India, all future F-16s and large share of the spare parts and sub-systems for every F-16 flying across the globe would come from India; India will then be the global hub for F-16s. Lockheed Martin says, “Our offer is not for just building a hundred F-16s in India; or even another hundred F-16s for the export market. The real value would come from the tens of thousands of spare parts, components, sub-systems and systems that would sustain the 3,200-plus F-16s still flying in the US, and in 24 other countries”, adding, “Transferring the line to India will make the F-16 even cheaper. And that will bring in even more export orders.”

India and Russia have already inked military deals worth Rs 60,000 crore during the BRICS summit held in Goa. Now, Russia is hoping to get another order on FGFA by end of the current year.

Presently, Lockheed Martin is left to deliver only 15 x F-16s of the 4,588 x F-16s ordered over the years albeit Bahrain and some West Asian countries have been evincing interest in this fighter aircraft. The company now wants to build the F-35 Joint Strike Fighter in the US. But significantly, the US Air Force plans to operate its late-model F-16s (Block 40 and Block 50 versions) for another 30 years, till 2045. Transferring the production line to India will imply the F-16s of USAF too will be supplied spares and replacement assemblies from India. The F-16 Block 70 reportedly flies faster, climbs quicker and carries more armament than most fighters in its class. It has 1,500 kilometres comparable to the much bigger Rafale, and with heavier air-to-ground weaponry for strike missions, the radius of action is still 700 kilometres.

But Saab too has offered a rival production line for its Gripen aircraft. Jan Widerström, Chairman and Managing Director, Saab India Technologies says, “We are very experienced in transfer of technology – our way of working involves extensive cooperation with our partners to establish a complete ecosystem, not just an assembly line.” It appears that Lockheed Martin and Saab will be the two contestants in the mega single-engine fighter deal for the IAF. The IAF of course can be expected to go for which of the two fighter jets meets its requirements best.

At the same time, India needs to speed up development of the FGFA jointly with Russia.  In February, India and Russia had revived talks on the delayed FGFA project after the defence minister approved the deal. The fifth-generation fighter jet will be on par with the capabilities of Russia’s PAK-FA T-50 aircraft, a fifth-generation fighter, but since the jet will be designed over the next few years, it is likely to exceed in some specifics – better than Russia’s PAK-FA T-50.

According to Sergi Chemezov, CEO of Russia’s Rostech State Corporation “The agreement has been completed on our end; we are ready to sign it. It is now down to the Indian side. There are some formalities to figure out, but I think it will be signed by the end of this year”. He added, “The FGFA project will produce a state of the art fighter jet, and it will be the result of the work on Russia’s most modern technology done by both Russian and Indian engineers. As Fifth Generation, it means fifth generation speed, ballistics and military equipment, avionics and stealth capabilities among other qualities.”

India and Russia have already inked military deals worth Rs 60,000 crore during the BRICS summit held in Goa. Now, Russia is hoping to get another order on FGFA by end of the current year. Under the new offer, India will need to contribute US$3.7 billion instead of US$6 billion towards technological know-how and some three prototypes of the fighters.

During the recent India-Russia Intergovernmental Commission on Military and Technical Cooperation co-chaired by Defence Minister Mohan Parrikar and Russian Defence Minister Sergie Shoigu the FGFA project and upgrades of SU-31 aircraft in service with the IAF were discussed. Development of the single-engine, medium fighter whether F-16 Block 70 or Gripen E will apparently come up faster in the county, but simultaneously India must hasten development of the FGFA considering the years it would take to field these aircraft coupled with the mounting China-Pakistan threat.

Speed will definitely be required considering the China-Pakistan dual threat which appears to be enlarging, China’s strategic pairing with Pakistan to keep India constrained within South Asia, PLA’s strategic lodgement in Gilgit-Baltistan, the CPEC, and Chinese designs on the IOR.

China recently showcased two of its advanced J-20 stealth fighters in a fly-over at an air show in Zhuhai, Guangdong province of China. The J-20 is a long-range radar-evading fighter jet equipped with air-to-air missiles, resembling Lockheed Martin’s F-22 Raptor. China has reportedly built six prototypes of this FGFA. China is also developing the J-31 which is supposed to sequel American F-35 Lightning II. Only US, Russia and China presently have FGFA.