The Rajapaksa Model of Combating Terror

Mahinda Rajapaksa, President, Sri Lanka spoke to VK Shashikumar of the Indian Defence Review on a range of issues on August 7, 2009, in an exclusive interview. 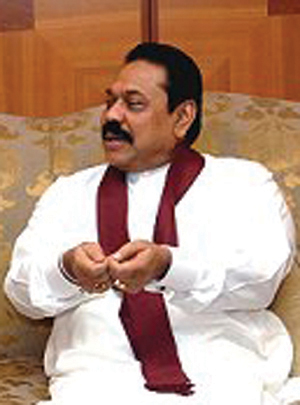 The Rajapaksa Model of combating terror, first revealed in the Indian Defence Review, is now being discussed at international strategic affairs forums. How do you plan to engage with other countries in taking this process forward?

I won’t be able to do it alone. The international community must help us. I think it is the responsibility of each country. All governments must get together because terrorism is not only a problem for Sri Lanka, it’s a problem for the whole world. I think terrorism is being financed through drug-money and (illegal) arms dealings. So we must break this (nexus). The arms and drug dealers should be tackled before you tackle the terrorists. That’s what we realized in our successful battle against the LTTE.

What’s your most important priority?

The most important thing at the moment is to see that the Internally Displaced People are resettled in this country. For the last 30 years we have not seen any development in the north and the east. We plan to provide them with the basic needs, infrastructure development and resettle these people. Once the resettlement process is completed our focus will move towards rapid economic development.

“…no minorities hereafter. We have people who love the country and the others who don’t”

Reconciliation is something which can be done through development. Without development I don’t think you can achieve anything. So the most important thing at the moment is to resettle these people after de-mining the place. But we must give them basic needs like water, electricity, shelter and roads. These are the most important things and we want to concentrate on that now.

Do you believe devolution is the solution?

In our constitution we have devolution. How much are we going to give them (Tamils) is the question and that can be done. It won’t be a problem. We are used to this. We have municipal councils, provincial councils, and local governance like gram rajyas. All of this is in the constitution. So, we want to implement the constitution and then see what more we can give them in case they (Tamils) want.80 percent of the (Tamil) people are living here in the south with the Sinhalese people.

You are keen to forge a new Sri Lankan national identity, a new nationhood…?

I’ve said no minorities hereafter. We have people who love the country and the others who don’t. Those who are not in favour….

What has happened in this country is mainly the creation of politicians. They are the people who want this (Tamil–Sinhalese conflict) not the people. The Tamil community doesn’t want this. But the politicians want this for their survival, for their party’s survival. This is our problem. We must find what the people want. People want to live in mixed communities. I have relations in Jaffna among the Tamils, I have Muslim relations. Ours has been a mixed society. If you travelled here in Colombo or go to Kandy or anywhere for that matter you would find all these people attending funerals, weddings, functions. They are not saying that because you are a Tamil don’t come here.

My problem is the 13th Amendment is there at the moment so whether it is relevant or irrelevant, at the moment we are practicing it. In a way you are right, but at the moment we need a solution, we need something to settle this problem. The earlier governments, whether it is Ranil’s or Chandrika’s, wanted to negotiate with this man (Vellupillai Prabhakaran). And they found the 13th Amendment a suitable tool to engage in negotiations with him. Though Prabhakaran signed it, he had suddenly changed his mind. Even I have tried to negotiate with him. We tried to do that for seven months. Finally, when they closed the door,s then I had to take this step (i.e., begin military operations, Eelam IV).

“I think that without any support from some of the countries they couldn’t have brought all these weapons. So we want to find out how they managed to get all this…”

So what is this 13th Amendment Plus that you talk about?

It all depends on the people. When they are free of fear, and if they can have the democratic rights of moving without any difficulty, people may come here and stay here in Colombo and some people can go and stay in Jaffna. Three decades ago in Jaffna and Killinochi we had a Sinhalese and Muslim population. They did business there, they lived there. But after the LTTE took over, they were chased out. Muslims were chased out. Some came to Putlam and others were in the IDP camps and at that time no one bothered about it. The West was silent. They never saw these camps for 18 years? But the Sinhalese refused to be in camps and stayed with their relatives. They kept them, gave them food. This is what happened (thirty years ago). Earlier in some government offices there were no Tamils and in some areas like in Trincomalee and Batticaloa there were no Sinhalese officers. So the Sinhalese could not communicate. There was a problem and we have to look into all this and settle it…

Would you announce a new national policy on language?

We don’t have to introduce a new national policy. Tamil and Sinhalese are official languages with English being the link language. We are at the moment paying the Tamil government servants Sri Lankan Rupees 25,000 for learning Sinhalese and vice versa.

Will the 13th Amendment plus reflect some radical constitutional provisions?

We are going to introduce a special chamber. We want to share power with minorities and the provinces. The second chamber might be an elected house of representatives from the provinces. We haven’t yet discussed this with the people but there are proposals like that we want to discuss with all the political parties. Federalism is out in Sri Lanka. We are not talking about federalism now, it must be a solution that comes from the people, we must get together – the Tamil, the Muslim, the Singhalese intellectuals get together and give me a solution, I am ready to accept it. If somebody comes and tells me to follow what is happening in some other country I will not be able to follow it.

“We don’t have to introduce a new national policy…”

Do you believe that a home grown reconciliation model is possible in post-war Sri Lanka?

“…we will take help from anyone who can assist in developing our country. the most important thing is to develop the country and from where else could you get the money to develop this country?”

Your government has been saying in off the record briefings to foreign diplomats that some international NGOs might have or could have collaborated with the LTTE and helped it to procure several powerful weapon systems…?

I do not want to come out with names, but there are incidents when some of the NGOs had asked to go there (the former LTTE controlled territories) and got permission to go there and finally we know that they got involved. Some engineers, technicians, etc. Otherwise they (LTTE) could not have achieved what they achieved. Some of the NGOs have done their part, but most haven’t. Our records show that nearly 3000 NGOs had registered with the government. They collected money from the people. All this money that was collected for tsunami or for some other reasons was the money given by people across the world to develop Sri Lanka. But we believe a lot of it went to the LTTE.

Could you spell out the parameters of the economic reconstruction that your government is proposing to undertake in the north?

First thing, we have to give them (Tamils) infrastructure development. Then we have invited the private sector to get involved and to start the development work.

Who helped the LTTE to accumulate so much lethal weaponry?

I think that without any support from some of the countries they couldn’t have brought all these weapons. So we want to find out how they managed to get all this, get the green light to ship them from various countries. I think the underworld must have been involved with all this. We know that they got millions and millions of rupees to buy all these weapons.

Who gave the LTTE so much money?

Whether it was the diaspora or from any other source…

“It is the collective responsibility of all of us… It doesn’t matter if it’s a Rajapaksa Model or a Bush Model. Fact is let us have model (that we can follow). Let’s defeat terrorism…”

Do you think that with the kind of weaponry Prabhakaran had accumulated he might have been nurturing a larger plan?

So his idea was beyond Sri Lanka…

Yes, it was beyond Sri Lanka.

Colombo’s close relations or ties that are developing with Beijing, what do you have to say to that?

Whether it is China or India or Pakistan or America or Europe, we will take help from anyone who can assist in developing our country. the most important thing is to develop the country and from where else could you get the money to develop this country? Can I go to Europe and ask from them? Can they afford to give us? Who runs the American economy?

What is your vision for a post-war Sri Lanka?

It is the collective responsibility of all of us… It doesn’t matter if it’s a Rajapaksa Model or a Bush Model. Fact is let us have model (that we can follow). Let’s defeat terrorism. Eliminate terrorism from this world, this is what we must do.

2 thoughts on “The Rajapaksa Model of Combating Terror”