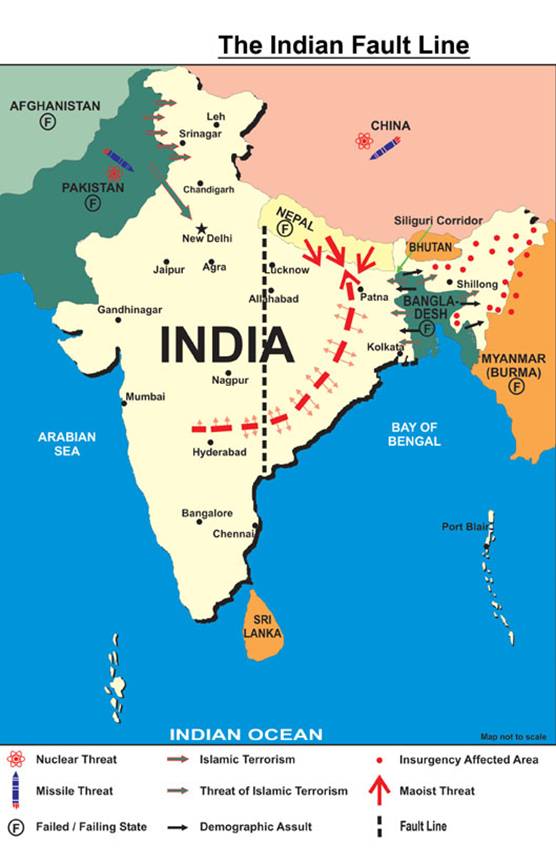 The genesis of the Indian fault line can be traced to many centuries of foreign domination of the subcontinent. Its scars are deeply etched in our psyche. It inhibits us from developing a cogent strategy for the nation. Notwithstanding the large resources, genius, skills, young population profile and an imposing geographical location in Asia, this limitation manifests in creating multiple fault lines across the national canvas. To develop a successful strategy, a nation must primarily take into account its own characteristics prior to incorporating other elements.

For example, a military expert recommended demilitarisation of Siachen glacier with two riders. First, he suggested that there should be a role model treaty like the Indus Water Treaty to ensure Pakistan did not commit treachery in occupying the areas vacated by us.

Indus Water Treaty is not a role model arrangement for the simple reason that hypothetically, if the direction of water flow were from Pakistan to India, this treaty would never have materialised in the first place!

Second, even if it did so, we should make it clear that there will be serious repercussions on other frontiers with the concomitant collateral damage. As a military man he was acutely aware, it will be nearly impossible to regain the territory lost on the glacier given the adverse terrain and climatic conditions. Right? No. Wrong on both counts.

First, Indus Water Treaty is not a role model arrangement for the simple reason that hypothetically, if the direction of water flow were from Pakistan to India, this treaty would never have materialised in the first place! Indus Water Treaty survives because of our magnanimity. Second, New Delhi does not boast of any instinctive characteristic of military retribution ever, except in the case of 1971 conflict. Also, the Indian Fault Line disallows our elders to comprehend or scan the bigger picture. If they do indulge in such an exercise, they would be strategically prudent in not offering demilitarisation of Siachen in isolation to other negative elements that are intrinsic to Pakistan’s overall game plan.

The tendency to create their own make-believe world convinced many of our countrymen that the invasions from our land frontiers for centuries could be ignored as the subcontinent assimilated the invaders in the existing society. How misplaced and erroneous, a perception. Invaders from the Northwest/Central Asia ruled over the locals by edge of the sword and forced their assimilation. Our helpless, bewildered ancestors with their petty bickering were left with little choice and therefore, tried to make a virtue out of consistent defeats. It persists in the Indian mind. No wonder; the terrorists across LoC ignore the fancy Cold Start Doctrine!

Our strategy in the present unfolding favourable geo-political scenario should be to further strengthen the relationships with the existing friends while adding new strategic partners to the list.

However, with generational change sweeping the entire spectrum of the Indian society, certain assertiveness is finally creeping in as witnessed during the Tsunami that was handled with finesse by New Delhi. The generation next is extremely focussed, capable of comprehending the entire strategic picture swiftly, and displays a fine balance between tolerance and aggressiveness simultaneously. The key question, in my mind, has always been whether India will be a surrogate or a ‘great power’.

Fortunately, the generation next is impelling India towards the great power status. It is not a status quo generation, but remains confounded with New Delhi’s inability to define clear strategic objectives. In a discussion held recently, I asked a former prime minister what our national strategic objectives were? It took him good one and a half hour that included a lunch tuck-in to respond that the national objectives were to have a peaceful neighbourhood! Even if one agrees with that generality, than what exactly was the strategy to achieve it? It did not elicit any answer.

Our national objective should be to promote India as an eminent power in Asia by 2020 by developing it as the alternative geo-economic hub that integrates and influences our extended neighbourhood through economic and military diplomacy. India as a benevolent power is suitably placed and conveniently located, geographically, culturally and otherwise to play this role effectively. Equipped with the most powerful Free Media in Asia that can be intelligently utilised as a weapon platform to further national interests, it needs to develop strategies that influence Central, West and Southeast Asia. With all its inadequacies, it remains a democracy worth emulating that checks formation of a medieval jehadi Caliphate that the terrorist organisations in our vicinity intend to create.

It is the only power in Asia that is eminently poised to extend a helping hand to restore a debilitating situation in its surroundings; balance the negative fallouts from an authoritarian regime of China in the region, even as we enhance our multi-faceted cooperation with the dragon. Our strategy in the present unfolding favourable geo-political scenario should be to further strengthen the relationships with the existing friends while adding new strategic partners to the list.

However, it is imperative that the implications of the fault line are understood and erased as the generation next gradually takes over the instruments of governance. Even as we embark on expanding our influence on global scale, we need to resolve the adverse situation prevalent internally and on our land frontiers as explained with the help of a map along side.

If China is the guru than in Pakistan it has found a suppliant disciple. Pakistan desires to be the Sarpanch of the subcontinent!

To appreciate the grim reality on land frontiers, it is necessary to take it as one big wall of turbulence running from West to North and from there to the East.

To emerge as the great power that can lead Asia, the generation next waiting to take over the instruments of governance by 2010, should erase the Indian Fault Line from the map and psyche before other self-inflicted distortions by the Union on ground can be resolved.

To emerge as the great power that can lead Asia, the generation next waiting to take over the instruments of governance by 2010, should erase the Indian Fault Line from the map and psyche before other self-inflicted distortions by the Union on ground can be resolved.

One thought on “The Indian Fault Line”