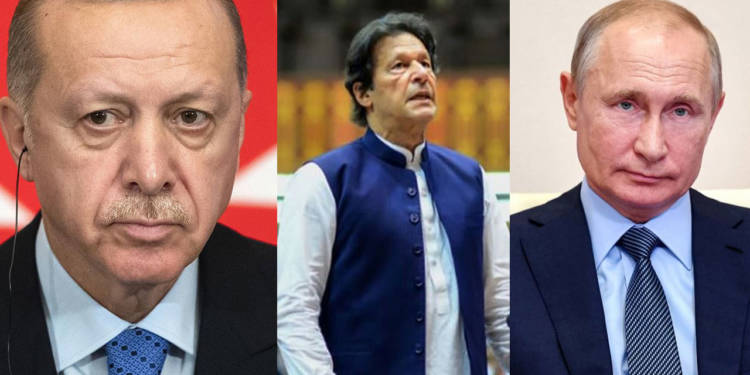 Ankara-Moscow relations have varied from hostile to frosty. Most recent hostile act was when Turkey shot down a Russian Su-24 in 2015 supporting Syria straying into Turkish territory. However both countries opted for conflict resolution, which they achieved successfully.

However in 2020 what should be of concern to India is developing strategic bonhomie between Turkey and Russia. As a NATO member why did Turkey opt to acquire S-400 Missile system from Russia. Two substantive issues merit a look into. These are;

Turkey opting to acquire S-400 system from Russia does not complete the story line. However when viewed from Russian perspective it makes eminent sense and logic. After the sordid Russian experience in Afghanistan almost akin to US experience in Vietnam, Russian dreams of having access to warm water port giving Russia access to open warm water sea lanes were put in arctic cold storage.

Russia, among the major military powers, is the most disadvantaged country in the world geographically. As early as in the first half of 18th century Peter the Great had advised that Russia will be a powerful military only and only if access to then Constantinople and possibly India was accomplished. Russia continues to look for a warm water port.

Break up of USSR was not envisaged in the manner it happened. The then USSR fragmented into three parts in 1989. These can be sub-divided in Pro-Russia, Pro-western and Neutral countries as under;

Geo-strategic scenario for Russia became even more grim when erstwhile Warsaw pact countries viz, Bulgaria, Czech republic, Hungary, Poland and Romania joined EU or NATO. Eastward movement of NATO has become a thorn in Russian quest for regaining military supremacy of cold war era. That is why Russia looked at Turkey with current Turkish president Erdogan adopting a hostile attitude towards US. Absence/ Lack of personal chemistry between erdogan and Trump made the matters worse. Russia took the gamble and what better way than providing military hardware, hence S-400 deal.

Although Russia is still ‘miles’ away from gaining unrestricted access out of Black sea into the Mediterranean. Montreux Convention of 1936 gave control of Bosporous Strait to Turkey, a NATO ally. Russian ships can transit but in restricted numbers during peace time. In conflict situation even the limited access will be denied. Hence if Turkey-Russia relations improve, Russian dream of access to warm water ports in Atlantic or Indian Ocean will/may fructify.

Turkey and Syria are hostile neighbours and are involved in limited conflict. Russia has supported Syria for two reasons; firstly, to prevent removal of Hafiz Al Assad as desired by USA and secondly, perhaps more importantly Russia has limited access to the use of Syrian port of

Tartus, the only warm water port available to Russia. Russia might, rather will use its influence to bring a halt to hostilities between Syria and Turkey. If Russia succeeds, all three nations gain, hence Russian nascent honeymoon with Turkey.

Pak-Turkey relations are on an upswing. This does not augur well for India because Pakistan (particularly PAF) will benefit from Turkish experience of operating US made F-16s. In recent past Turkey has helped PAF F-16s upgrades as well as aero-engine overhauls. Turkey-China relations have been on the back burner because of Turkey being a NATO ally. But with mediation from Pakistan, China-Turkey relations are slated to attain new heights, specially in the field of Aviation. Aviation industry Corporation (AVIC) of China and Turkish aviation Industry joining hands might appear to be a distant dream till now might just become a reality.

Incoming US administration led by Joe Biden, will in all likelihood, soften the US stand on NATO and its allies. But with Russia-Turkey honeymoon continuing, will USA/NATO accept the new equation? Will Turkey remain part of NATO? Although it is extremely unlikely that Turkey will be ejected out of NATO, however if that happens the biggest loser will be USA because USAF base at Incirlik in Turkey will have to shut shop. Strength of USA-Turkey relations can be gauged from the fact that USA had based JUPITER MISSILES in Turkey in early 60s, which were removed on a quid pro quid basis when USSR removed its missiles from Cuba during the infamous Bay of Pigs crisis. USA has limited option of PAF base at BADABER. In the prevailing instability in Pakistan USA will never risk having a full fledged air base in Pakistan, hence continuing with Incirlik will/may be the only option. This situation will give Turkey a handle to twist USA and might even force USA to defreeze the suspended F-35 supply.

Will Turkey allow use of TuAF elements against India, if and when India-Pakistan have another ‘match’? Will Turkey assist Pakistan in aviation sector by sharing its expertise to enhance JF-17 production line at Kamra Aeronautical Complex of Pakistan? In the present geo-strategic scenario, neither possibility can be ruled out. India’s relations with Turkey are at best ‘frosty’ and are unlikely to change in foreseeable future.

Any discussion involving Pakistan is incomplete unless Chinese influence (read control) over Pakistan internal politics as well as foreign policy is not kept in view. Hence while discussing Pak-Turkey nexus, China’s inclusion becomes obvious. In spite of the fact that only 3% of Turkey is in Europe, Turkey considers itself to be part of Europe. Given Turkey’s strategic position on the globe, Turkey has enjoyed considerable influence over NATO and even USA.

However under the leadership of Erdogan, Turkey has developed huge mistrust in relations with western world. Turkey’s honeymoon with western world is in a state of disarray and might just act as the much needed catalyst for convergence of views in strategic domain between China and Turkey, notwithstanding the political differences due to Uyghurs issue.

China, the new geo-political giant led by a highly ambitious pro-active president Xi Jinping will be delighted to partner Turkey in various ambitious Chinese initiatives and in the process gain access to eastern Mediterranean sea. All this does not augur well for India in the long run. As a NATO member Turkey did not need to examine the option of going nuclear. But with developing China-Pak-Turkey axis, will Turkey like to bring in substantive change towards its current non-nuclear status?

A simple ‘YES’ or ‘NO’ will not/cannot be the answer to this vexed question. Pakistan will be more than willing to support Turkey, if and when Turkey decides to exercise nuclear option. Break up from NATO alliance or ejection from the alliance will be an extremely morbid event strategically. But the question arises that why will Erdogan insist on going ahead with S-400 deal in spite of clear and open opposition from USA. Are there any missing pieces to this puzzle?

US-Turkey relations must be on top of Biden administration’s geo-political agenda. Continuance of USAF presence at Incirlik is a US, rather than Turkish necessity/compulsion. However offensive posturing of Turkish president with NATO allies, France in particular, will have to be taken care of. Erdogan’s refusal to condemn acts of religious terrorism, calling French head of state as a ‘mental case’ is a clear indication of how Turkey is likely to view US advice/suggestions, if any. In fact Turkey may resort to arm twisting and ‘force’ USA to supply the F-35s. Will China influence/pressurise Pakistan to get access to F-35 technology? Not a far fetched idea!

Russians, while agreeing to supply S-400 system to Turkey must have taken into account the response from USA. But whether China-Turkey bonding angle or stoppage of F-35s supply to Turkey by USA was also taken into account is not clear. Although friction with NATO allies and USA is advantageous to Russia.

Any further arms deal between Turkey and Russia may not augur well for India in the long run. Pak-Turkey-China axis, a foregone conclusion, is subject of discussion by military strategists. It is the possible flowering of Pak-Turkey-Russia axis that should worry us.