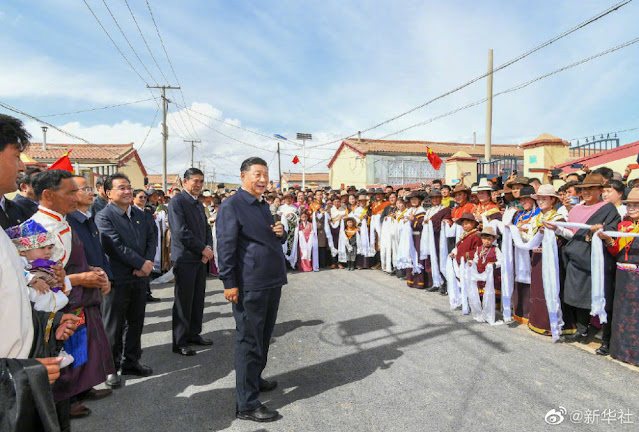 According to China Tibet News Network, the permanent population of Lhasa is 867,891, an increase of 55.14% compared to the Sixth National Census.

It is an enormous increase, particularly because it only takes into account the ‘permanent’ settlers in the Tibetan capital.

The number of ‘migrants’ or ‘temporary settlers’ which can easily be manipulated, should be added to these figures. It is a real invasion of the Tibetan capital.

On June 8, 2021, a communiqué released by the Office of the Leading Group for the Seventh National Census of Lhasa, announced the new figures were “in accordance with the Regulations on the National Census and the decision of the State Council.”

It was the seventh census and it was carried out on November 1, 2020.

China Tibet News says that “the national census is in accordance with the unified deployment of the State Council and the Tibet Autonomous Region’s Seventh National Census Leading Group.”

According to the same source, the staff who conducted the census was supported by “Lhasa City’s governments at all levels, census agencies and all census personnel.”

The communiqué adds: “With the hard work and selfless dedication, the majority of census subjects participated and actively cooperated, and successfully completed the tasks of the Seventh National Census in Lhasa.”

Let us remember that the data for the ‘permanent’ and ‘temporary’ populations are compulsorily contained in each individual’s phone.

Even if it has probably been ‘polished’, the outcome is shocking.

It must be a first time that an urban area witnesses a 55% population increase in 10 years. It is only possible, if formerly ‘migrants’ workers have been incorporated in these figures.

This raises many questions, in particular for the environment.

How much  increment of population can the Land of Snows take without choking? The natural resources are limited and the fragile ecology of the plateau has certainly limits.

The Chinese Government objective seems only to flood the local population with Han Chinese.

Only an expert in statistics could analyse this, but too me, it seems to indicate that many more single persons have settled in Lhasa during the last 10 years; It shows that tens of thousands more migrants have come to the Tibetan capital.

Many of them have now be given the status of ‘permanent’ resident of the Tibetan capital and others married Tibetan girls.

Among the city’s permanent population,

Compared with the Sixth National Census in 2010,

Age-wise, if the statistics are correct, it seems a rather stable population.

These statistics should be read with Xi Jinping mega project for poverty alleviation.

On October 17, 2020, according to Xinhua: “Tibet Autonomous Region has accomplished the historical feat of eradicating absolute poverty. …By the end of 2019, Tibet had lifted 628,000 people out of poverty and delisted 74 county-level areas from the poverty list.”

Wu Yingjie, the boss of the Communist Party of China in Tibet called this achievement a “major victory.”

Wu also mentioned that since 2016, a total of 39.89 billion yuan has been invested in over 2,900 poverty alleviation projects, which helped lift more than 238,000 impoverished people out of poverty and benefited more than 840,000 people.

For this, 965 ‘relocation’ villages (known as Xiaogang villages) were built and 266,000 people were moved to new houses. “The relocation programs were carried out entirely on a voluntary basis,” Wu said.

This means that if these villages have to be inhabited, from where the populations have come, especially when the population of the Tibetan capital has already increased so drastically during the same period.

The answer is probably from China.

Though we do not have the figures for the other Cities/Prefectures and the Xiaogang villages, the same pattern in population increase than in Lhasa, must have taken place, if not worse.

It means more Hans are daily arriving in Tibet to settle.

In their own admission, the ‘permanent’ migrant population has increased nearly as much as the Tibetans.

What about the ethnic composition in the border villages?

Among the City’s permanent population,

The population is 256,544 (the above-mentioned population with various educational levels includes graduates, undergraduates and students from various schools).

There is no doubt that the level of education has improved.

Among the city’s permanent population,

These figures are for Lhasa City (ex-Prefecture) only.

Let us hope that we can soon access the figures for the other Cities/Prefectures.

The last part of the report mentions the ‘region distribution’ of Lhasa’s ‘permanent’ population.

The fact that the report speaks of ‘permanent’ population shows that a large percentage of the migrant population is not accounted. This is even more worrisome.

The following figures show that the permanent population of Lhasa is 867,891, of which:

Last month The China Daily had announced that the Tibet Autonomous Region (TAR) continued “to enjoy a demographic dividend as young adults make up a relatively high proportion of its population, providing abundant labor resources.”

It is probably due to migrant workers.

The article said that despite a steadily growing aging trend nationwide, less than 9 percent of Tibet’s population is aged above 60: “The number of Tibet residents aged 60 or older on November 1, 2021 was 311,000, accounting for just 8.52 percent of the region’s population and up by 0.85 percentage points from a decade previously. …Across the country, the average proportion of the population aged 60 or older was 18.7 percent.”

Therefore, there is an acceleration of the migration in Tibet in general.

Remember in 1985, the Dalai Lama wrote in The New York Times that A Vast Sea Of Chinese Threatens Tibet.

The Tibetan leader then observed: “It is now more than 30 years since China forcefully occupied Tibet. In this period, our religion and culture has been destroyed. The people of Tibet have suffered tremendous physical and economic deprivation, and at least 1.2 million have died as a direct result of the occupation. But never, even in the worst of times, did the Tibetans lose their distinct national identity. That is the threat we face today: The complete assimilation and absorption of our people by a vast sea of Chinese settlers streaming across our borders.”

The Tibetan leader continued: “Early this century, the Manchus were a distinct race with their own culture and traditions. Today, only two to three million Manchurians are left in Manchuria, where 75 million Chinese have settled. In Eastern Turkestan, which the Chinese now call Sinkiang [Xinjiang], the Chinese population has grown from 200,000 in 1949 to seven million, more than half of the total population of 13 million. In the wake of the Chinese colonization of Inner Mongolia, Chinese now outnumber the Mongols by 8.5 million to 2.5 million.”

In 1985, the Dalai Lama mentioned his native place, Amdo, an area visited yesterday by Xi Jinping: “The area where I was born, the Kokonor region of northeastern Tibet, now already has a population of 2.5 million Chinese and only 700,000 Tibetans, according to a recent Chinese newspaper report. The Chinese claim to be giving special care and attention to the so-called Tibet Autonomous Region, which comprises only the western and central parts of Tibet, but they are sending large numbers of young Chinese colonists into the eastern and northeastern parts of our country.”

The situation is far more dramatic today, but nobody seems to bother.