US-Taliban Peace Deal: Is it a Compromise? 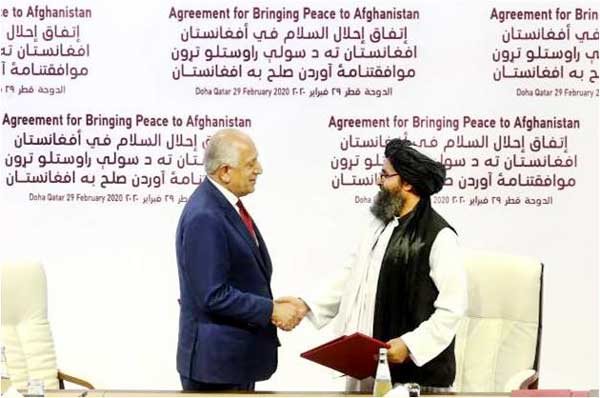 A long-awaited historic US- Taliban Peace Deal stands signed byU.S. envoy Zalmay Khalilzad and Taliban deputy leader Mullah Abdul Ghani Baradar inking it on February 29, 2020. All stake holders have expressed hopes of peace returning to Afghanistan, but the apprehensions on longevity of the deal as well as peace prospects could not been hidden in the utterances by various dignitaries.

While a peaceful terror free Afghanistan is everyone’s desirability in the region, but the existing environment in Afghanistan, in which the deal has been signed leaves few questions in the mind of all strategists to say; Is it a deal or compromise? Let me analyze it from the perspective of each of the stake holder.

Compulsions of US and Allies

US-led invasion ousted the Taliban post September 11, 2001 attacks. After losing 2,400 US soldiers, tens of thousands of Afghan troops, Taliban fighters and Afghan civilians and spending more than $1 trillion, it was appearing to be unsustainable with peace appearing to be only a mirage. I am sure that in 2001, the US planners never dreamt of such an end state, where they will be signing a deal with the same Taliban, promising nothing more than reduction in violence/no violence in concrete terms, in exchange of phased ouster of all foreign forces.

Taliban’s assurance of not to allow use of the Afghan soil for terrorism seems too good to be true. The apprehensions about Taliban adherence to deal was quite evident in Mike Pompeo’s speech reminding them to keep their promises of not siding with al-Qaeda and to defeat Islamic State, and US Defense Chief indicating that it will not hesitate to nullify the deal, if Taliban failed to hold its promises as per the deal.

The fact that President Trump had campaigned for ending the US Afghan War, made it an important foreign policy objective for US. Militarily speaking US was not expecting a military victory of the order of Taliban laying down its arms, as it was cost prohibitive in terms of casualties and human destruction.

The promise of US and its allies for an initial reduction of troops to 8,600 within 135 days and withdrawal of all their forces from Afghanistan within 14 months, if the Taliban abide by the agreement, appears to be a reasonable compromise, given the fact that culminating point of US war was reached long back without destroying Center of Gravity of Taliban and their further stay was not making sense, in overall cost benefit analysis.

Complete withdrawal of US forces will also amount to ceding the crucial strategic space to its competitors, but it appears that US has thought through it; hence made adequate promise to help Afghan Government in combating al-Qaeda to ensure that it does not become strong enough to strike mainland of US again. It indirectly means that US is looking at some support to Afghan Forces in some form, which will get decoded as the deal progresses, because the US withdrawal is conditional to Taliban’s compliance.

One more compulsion of US for such compromising gesture could well be the likelihood of Iran slipping into the hands of hardliners, hence it is advisable to reduce some engagements of troops as some more flash points may emerge, in vibrant international scenarios.

What did Taliban Achieve?

Under the circumstances Taliban got the better of the deal by temporarily halting its terror activities in exchange of US promise of phased withdrawal of all foreign forces. The fact that the Taliban representative made it a point to remind everyone of their Islamic values during the joint statement, clearly indicates the deep rooted love for Sharia law of its cadres, who  want to see their leaders remembering it, despite promising to be reasonable to all segments of the society.

Taliban would also be happy about getting back 5000 of its cadres in Afghan Government custody in exchange of 1000 prisoners, if all goes as planned. Their promise of renouncing support to al-Qaeda and fighting ISIS is unrealistic, because if Taliban doesn’t harbor the terror organizations and Pakistan also promises so, then expecting that they will vanish from the region is wishful thinking in light of past credentials of both.

Afghanistan Government goes along despite Isolation

Afghan Government has never been comfortable with its exclusion from talks with Taliban. Despite that President Ghani in his address before signing ceremony indicated hopes of peace based on mutual respect. Apparently, the compromise has been due to lack of any leverage, as Taliban refuses to talk to them and the election results have not been convincing enough to put him in driving seat. Going along with the deal, calling for Ulema and intra-Afghan dialogue for durable peace was the only workable option for him. He chose to look for US help for lifting UN sanctions on Afghanistan.

The promises of US help in facilitating Afghan- Taliban talks would have comforted him, although Taliban did not make any concrete promise for that. It is a fact that any foreign prescription for peace will not work in Afghanistan and intra-Afghan dialogue is the only way forward for sustainable peace. It is also a fact that Afghan National Security Forces still need more capacity building and will be under intense pressure in case of significant withdrawal of U.S. forces from the country.

The fact that US as well as Taliban singled out Pakistan in thanking it for the deal, gave every reason for Pakistan to smile about. It however needs to be noted that Taliban and Pakistan have been hosting and supporting al-Qaeda, Haqqani network and other affiliates for so many years, it may be unrealistic to expect that both will not allow them not to use their territory and force them to vanish from the region. Apparently, it is for this apprehension Mike Pompeo found it necessary to mention that he hopes that Pakistan will continue to do its part, after the signing of the deal.

The prospects of peace in Afghanistan are good for all regional players including Russia, China and India provided it becomes a reality. Presently all factions of Afghanistan being on the same page looks to be as difficult as, change of behavior of Taliban, notwithstanding the rosy promises.

India, although not involved in the process, having made significant investments there, will always hope for an Afghan led, Afghan owned peace and reconciliation process and a popular democratic government in Afghanistan. It is certain that some troops will withdraw but it remains to be seen whether this Peace Deal will work, or the world will see a new Afghanistan having different areas being governed by different entities, struggling to increase its influence with Taliban in lead.