Unpredictable China: are we prepared?

The rise of China’s military power and its reach and capabilities has surprised the world. China has moved beyond the doctrine of “local wars under conditions of high tech environment” to domain i.e. “local wars under conditions of informationalisation” and “deep battle” beyond the Chinese border. China is in the process of building comprehensive capability for simultaneous campaign on land, sea, air, space and cyber space. This brings us to the question that is there a military compulsion for her to devote so much energy and efforts to build up military power with global reach? China’s leaders have yet to adequately explain the purposes or desired end-states of their military expansion1.

When Bharat Verma wrote, “China will attack India before 2012,” many rubbished it as figment of imagination. Probably they missed the point “¦

The peaceful rise of China is a matter of concern to India. More so because we have unresolved boundary dispute with China and we are economic competitors. It is time now that our military and strategic thinkers took note of the capabilities and security implications of resurgent China in the subcontinent. We need to carefully examine the threats from China in the near future and our capabilities to deter them. Is the threat from China only on land or do we need to guard other frontiers as well? We will miscalculate if we continue to perceive threat only from ground or air. The strategy of ‘People’s War Under Modern Conditions’ allowed for dramatic force restructuring in an atmosphere of absolute political stability allowing Beijing to overhaul its army to adapt to modern conditions.2 In the light of the above factors — future threat from China will be more potent and lethal encompassing space, air, land, sea and cyber domain.

China’s strategic intentions and military capabilities make it more unpredictable, and it may not hesitate to use strong arm tactics to resolve boundary disputes as and when the regime feels it appropriate. China’s National Defense Law identifies six military tasks. One of them is the underlying objective to support the Party’s reunification policies.3 This translates into the fact that China at some point in time can use military power to regain control over certain parts in the neighbourhood which it perceives to be its own. Considering the total lack of transparency and military build up, China is the biggest challenge for India in the years ahead. Therefore we need to find answers to the following questions:-

War by military engagement in the modern time is fought when all other means are exhausted and China has not yet exhausted other options of war.

It is important to find answers to the above questions and embark on the direction to acquire military prowess before it is too late. Therefore, we have to examine our defence infrastructure, force structuring, (including Air Force and Navy) space, cyber and nuclear capabilities to effectively counter China. This must be done in a holistic manner by incorporating all wings of the security apparatus. But before we do that, we need to carry out an audit of our logistics set up, force ratio vis-a-vis the threat and infrastructure to support offensive/defensive operations in North East, Central Sector and Ladakh.

When Bharat Verma wrote, “China will attack India before 2012,”4 many rubbished it as figment of imagination. Probably they missed the point, and did not see it through the prism of “Art of War” by Sun Tzu. Is war fought only on the battlefields between two armies or there are other ways of fighting a war, which is economical, but having the same end-state? China continues to be driven by Sun Tzu’s philosophy. Sun Tzu had said:- 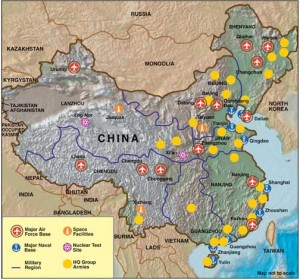 China is doing nothing new but following the ‘Art of War’ and ‘Principles of War’ laid down by Sun Tzu. It is waging war on India without field armies. The intent is clear — to subdue India without fighting a war.

The present posturing by China is the extreme form of maneuver and aggression. In fact it is a classic case of exploiting maneuver to the hilt and its tremors are being felt. It is a well thought out strategy — never allow your adversary to rest in peace. It is strategic wisdom to continue war during peace time and keep the adversary guessing about the intentions and at the same time debilitate his will to fight. Through this strategy of aggressive posturing, China is probably sending following signals:-

India has no real bargaining leverage vis-Ã -vis China and negotiations rarely succeed in the absence of leverage.

The warning given by Bharat Verma has substance, and needs careful examination. China may not physically attack India but aggressive posturing, in space, cyber and economic realms cannot be ruled out. The impact will be same if not more devastating. If it can achieve the same objective by this aggressive assertion, why go to war. War by military engagement in the modern time is fought when all other means are exhausted and China has not yet exhausted other options of war. China has embarked on the journey to its final objective i.e. super power status. It will not allow this march to be disrupted. Therefore, it is not keen to get entangled in an armed conflict in the region. At present China’s concerns are focused on economic development with the singular goal i.e. to double, triple and quadruple its US$ 4 trillion Gross Domestic Product (GDP) by 2050. Certainly, China is not contemplating any military engagement at the moment. But in the backdrop of the above, what are the options for India?

The dignified and enduring option for India is to develop comprehensive national power. This is imperative for preparing for the future challenges. India should be able to look after her own interests without looking over its shoulders. Cooperation and alliances are bonus, but that bonus will only come to our benefit if we are strong enough to protect our interests and be counted at least in the region.