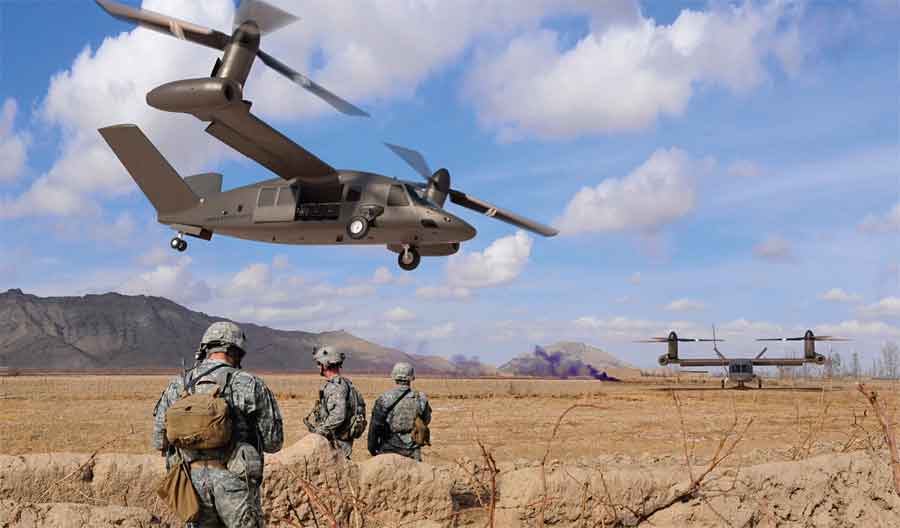 The V-280 is Bell’s offering for the Department of Defense’s Joint Multi-Role/Future Vertical Lift helicopter project. If chosen, it could result in the production of more than 4,000 aircraft for the selected design, which will replace the US Army’s Sikorsky UH-60 Black Hawks and the Boeing AH-64 Apaches.

Garrison stated that the V-280 is designed to meet the needs of the Department of Defense and the US Army’s requirements of speed, range, payload and reliability.

While the V-280 looks similar to the original Bell/Agusta BA609, there are major differences. The first of these is the fact that the rotor blades and gearbox tilt upward, not the whole engine nacelle during the transition from forward flight to helicopter mode. This, said Garrison, was to improve the experience for troops leaving and emplaning the aircraft when on operations by taking away the hot engine exhaust. He added that the designers believed that keeping the engine in this position would assist the engineers during maintenance, rather than having the engine standing vertically as it does when a V-22 is on the ground.

With a V-tail configuration that will help to improve the aircraft’s overall stability, the V-280 will have two pilots sitting side-by-side with two crew chiefs, carrying up to 11 combat troops. The first prototype of the aircraft is expected to fly in 2017.

The V-280 Valor stands for the following – V = vertical; 280 for the aircraft’s cruise speed and Valor as a tribute to the services.

One thought on “Third-Generation Tilt-rotor V-280 by Bell”