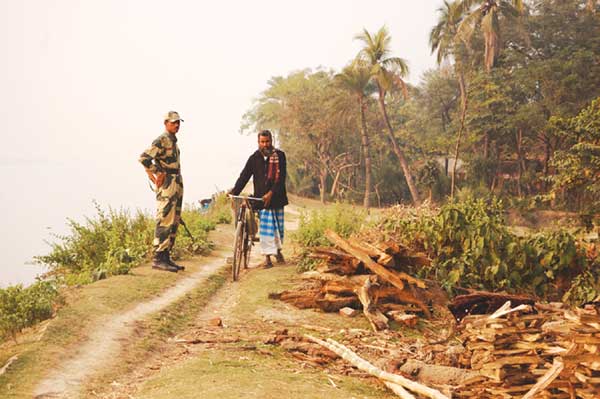 Operation Zero Line Investigates the gateway of terror in the East – the 4,095 km (2,979 km land border and 1,116 km riverine border) long India-Bangladesh border, half of which is along West Bengal. Assam, Meghalaya and Tripura are the other states which encircle Bangladesh. The India-Bangladesh border is porous. It runs through rivers, ponds, agricultural fields, villages and even houses where the entrance is in India and the backdoor in Bangladesh. It is perhaps the most complex land border anywhere in the world.

That is why for nearly three decades this long stretch of the border was the hub for illegal migration, human trafficking, smuggling of narcotics, guns and ammunition and essential supplies.

The ease with which smugglers can bring in arms and ammunition and terror infiltrators to cross over into India is, perhaps, not adequately understood in the corridors of power in New Delhi.

All of the above continues unabated. But a new dimension has been added to the existing security threats. And that is infiltration by terrorists. The Border Security Force has identified 46 places along this border that is prone to infiltration. Fencing of this long border has already begun at several points along the border. Some sections have already been completed. Millions of Bangladeshis have entered India through this porous border and acquired Indian citizenship. Official figures stand at 1.2 million. But the latest Census figures of 2001 show that the demography of the six border districts of West Bengal have dramatically changed because of illegal migration.

To show how porous the border is and how easy it is for terrorists to infiltrate, I travelled along the South Bengal frontier from South Dinajpur till the Sundarbans. I crossed from India into Bangladesh at the Indian border town of Hilli to its namesake in Bangladesh and came back in via the same route. Here we also caught on camera stunning visuals of smuggling and Bangladeshis waiting to cross over.

Further down in Malda at the dead of the night I experienced first hand how despite the 24 hours vigil by the Border Security Force (BSF), it is possible for terrorists to cross over. I visited border villages in Malda and Murshidabad sectors which are right on the Zero Line and found out how easy it is for Bangladeshi illegal migrants, smugglers and terrorists to enter Indian Territory.

On paper, a long zigzag border separates India and Bangladesh. On the ground, little does. If the frontier along Malda is ideal for infiltrators to step across the zero line, at the border town of Hilli, a wall meant to divide two countries is now a channel for smuggling. There are border villages hugging the zero line where all anyone has to do to enter India is just walk across. The porous Indo-Bangladesh border presents a clear and present danger to India’s national security.

Smugglers on the Wall

At the border town of Hilli in South Dinajpur crossing the border simply means stretching a leg from a sturdy branch of tree to a wall. This is how easy it is to cross the border. Everyday, from the first daylight till sun down, a frenetic smuggling run takes place on a patch of a wall on the India-Bangladesh border. Nobody knows who built this wall in West Bengal’s border town of Hilli. The local administration says it was built during the pre-partition days. After all, Hilli was once a town with a railway line running right through its middle.

Further that night along with the BSF I planned a series of simulation exercises to find out for myself how infiltration happens along the Indo-Bangladesh border. The reality on the ground is astounding.

In 1947 the areas west of the railway line became Indian Territory and the areas on the East retained the name of the town but became part of another country. But far from dividing two countries it’s a wall that unites smugglers, illegal infiltrators and in recent times terrorists.

On the Indian side of the wall the houses are just an arm’s length away. On the Bangladeshi side are the Hilli railway station and the railway line, which is the lifeline of smuggling and illegal activities and is used by the illegal infiltrators, terror agents and terrorists for their movement.

I walked from the main square of the Hilli square in the Indian part of the town down the road, turned left into a packed residential locality, walked down the twisting and turning alleyways and reached the border wall standing on the zero line. On one side of the wall separated by a narrow lane are houses on the Indian side overlooking the railway line and across the wall, in the Bangladeshi side, I saw hordes of boys waiting to carry away smuggled goods.

On the wall scores of teenage boys waited for their Indian counterparts to hand over sacks of rice, cooking oil, medicinal drugs, phensydyl cough syrup bottles and almost everything that has a demand in Bangladesh. Since the wall technically is on Bangladeshi territory it’s virtually impossible to stop smuggling activities because it is considered to be a legitimate means of livelihood for a large proportion of the population on both sides of the border. 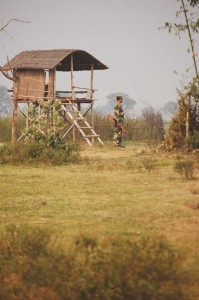 At one point the border wall curves left towards Bangladesh along a narrow alley-way and just at the turn is a small, sunken border pillar, the only marker of sovereignty in this small patch of a fuzzy borderland. Along with an Indian local I nonchalantly turned the corner and within seconds, just two steps and I had walked into Bangladeshi territory. For a while nobody noticed me and then I started attracting attention because an outsider is easy to spot in the milieu. But suspicious gazes gave way to a sudden flurry of activity. My local companion informed me that this was a sign of a train about to pull into the Hilli Station on the Bangladeshi side of the wall.

Every train that stops at Hilli station carries away smuggled Indian goods and also brings potential infiltrators and illegal migrants. My presence initially inhibited the smugglers on the wall. But they continued to stand fearlessly on the wall waiting to receive packages and sacks from their Indian agents. Soon noticing the Bangladeshi boys frozen on the wall and watching my movements, a man walked out of a house from the Indian side. “This is a daily occurrence. It goes down at night.” I realized that he might be involved in smuggling activities and was indirectly suggesting that I should go away so that the boys on the wall could go back to business-as-usual.

Almost everyone in Hilli is involved in smuggling. Women couriers wrap small packages around their saris. Their destination: houses within touching distance of the border wall. These houses are crammed around narrow lanes and close to the border wall. For these Bangladeshi boys on the border wall, the last point between India and Bangladesh, it’s simply a hop, skip and jump into Bangladesh. They carry sacks of phensydyl, drugs, rice in broad daylight, in clear knowledge of everyone in this town. “I am going to take rice from here. I carry around 200 kg in installments, a sack-load of 50 kg in each trip. If the Bangladeshi Rifles catch us they just verbally abuse and let us go and the process goes on,” said a smuggler on the wall.

Every train that stops at Hilli station carries away smuggled Indian goods and also brings potential infiltrators and illegal migrants.

A video shot by an intelligence agency and in the author’s possession shows groups of Bangladeshi smugglers on one side of the railway track waiting to dodge the Bangladeshi Rifles border guard. But what’s more worrying in the video are images of Bangladeshi infiltrators waiting to cross over into India. And guess what’s even more worrying? These visuals show Bangladesh Rifles soldiers not making any attempt to stop smuggling or infiltration.

Smuggling is the main economic activity along the India-Bangladesh border. The ease with which smugglers can bring in arms and ammunition and terror infiltrators to cross over into India is, perhaps, not adequately understood in the corridors of power in New Delhi. On the Zero Line, right on the International Border, Bangladeshis and Indians live in close proximity; a situation that virtually makes the border and all security arrangements to make it inviolate absolutely meaningless. This is easily exploited by terror infiltrators and anti-national operatives and insurgents based in Bangladesh.

Hilli is only one of several vulnerable spots along the 4095-kilometre Indo-Bangladesh border. Through Israeli manufactured thermal imaging devices I witnessed Bangladeshi infiltrators trying to sneak into India in the dead of night. Staking out border locations in the Malda sector along with highly motivated BSF troops I was experienced first hand and understood the reasons why terrorists from Al-Qaeda backed outfits like the Lashkar-e-Tayebba, Jaish-e-Mohammad and Harkat-ul-Jehadi-Islam prefer to enter India from Bangladesh.

3 thoughts on “The Subverted Indo-Bangladesh Border : I”