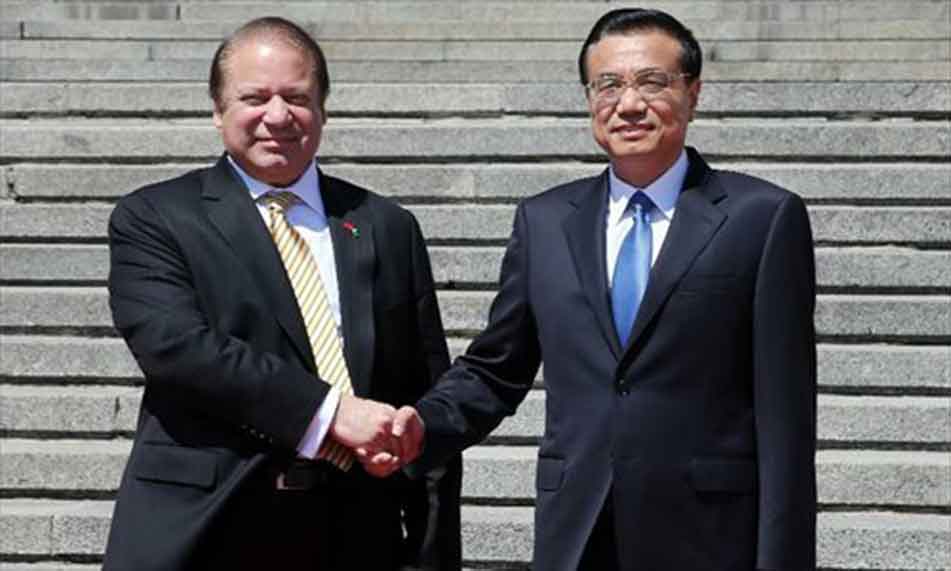 With the opening of two fronts against New Delhi, Beijing will, in collusion with Islamabad, repeat ‘1962’ in the near future on an enlarged scale.

The ‘peace’ witnessed in Kashmir for many years was not due to any extraordinary Indian capabilities; it was because Pakistan was preoccupied with the ongoing war in Afghanistan pursuing its own strategic interests and that of China.

As a tactical ploy for the past several years, Beijing and Islamabad have been dishing out sermons on friendship. China has used its lobby successfully in India to promote the concept that the two nations, instead of being at loggerheads with each other, should join hands to make the twenty-first century theirs.

The twin objective was to concentrate on the American forces; firstly, with the help of Pakistan to ensure the withdrawal of US forces from Afghanistan and secondly, that India does not shake hands decisively with the US thereby tilting the balance of power in favour of democracy.

Similarly, Pakistan, more or less a colony of China, went out of its way to promote friendship with India, using the oft employed ploy of the ‘twenty-first century belonging to Asia’. The refrain was that instead of fighting with each other Pakistan, China and India should join hands to evict American imperialism from Asia. Pakistan deployed its journalists on Indian channels at times bending backwards to placate Indian sentiments. Simultaneously, they effectively activated Pakistan’s peace constituency in India that is much larger than the one that exists in Islamabad to gain major traction. The continuous ranting of Pakistan being a bigger victim of terrorism and putting a temporary leash on Hafiz Sayeed did help to pull the wool over a large number of Indian eyes.

The aim of the China and Pakistan combine was to first employ jihadi forces in Afghanistan under the guidance of the Pakistan Army to evict the Western forces. Therefore, it was imperative to offer a fig leaf in the guise of friendship that retains calm on the Indian front. It was merely a tactical withdrawal to concentrate all available resources against the Americans in Afghanistan. Meanwhile under China’s guidance, India’s Track II crowd was enticed to sign, seal and deliver Siachen to Pakistan as the glacier is of great strategic importance to the Chinese. In the so-called Track-II diplomacy, India walked straight into the trap!

At the same time, to gain credibility with thinking Indians, both Pakistan and China desisted from aggravating the situation on the borders. However, the so-called misguided elements that left Kashmir for PoK were sent back duly trained in jihad on the pretext of temporary surrender; the real game being to wait for an opportune moment to engineer a home-grown rebellion. All along, the pot was kept intelligently boiling but on slow fire. The ‘peace’ witnessed in Kashmir for many years was not due to any extraordinary Indian capabilities; it was because Pakistan was preoccupied with the ongoing war in Afghanistan pursuing its own strategic interests and that of China. Undoubtedly, these were high priority military objectives.

With the withdrawal of US forces from the region, the jihad factory will be idle. Pakistan can implode due to this situation of high unemployment.

As usual, on account of collective incompetence, the establishment at Delhi fell for this ruse. It was the conduct of ‘psychological warfare’ under Chinese supervision at its finest. Executed with finesse, the phase of temporary tactical withdrawal put New Delhi completely off guard. Pakistan believes it has defeated two super powers in Afghanistan – the Soviet Union with the help of the US and the latter, with the help of China. Defeating India with a little help from China should, therefore, be a cakewalk.

In the second phase currently underway, India’s borders have come alive with China and Pakistan mounting intense pressure simultaneously. The PLA intruded 19 km across the LAC into Indian territory and dismantled existing structures. To add insult to injury, on the arrival of the Defence Minister Antony at Shanghai, Beijing issued a demeaning statement against New Delhi. Incursions into Indian territories continue while Chinese innocently claim they are patrolling on their side of the LAC.

For all the insults the Chinese continue to heap on India, they were rewarded by New Delhi rolling out the red carpet for Li, withdrawing troops from own territory in Despang, and sending the NSA, Foreign Minister and the Defence Minster in succession to pay respects as though Beijing were an ‘imperial Durbar’. In spite of being insulted on landing at Beijing, the Defence Minister announced the enhancement of military-to-military cooperation between the two nations! To be subservient appears to be a persistent trait of the Indian leadership. It is simply amazing that New Delhi should offer military-to-military cooperation to China – a country that is at loggerheads with it all the while laying claim to 90,000 sq.km. of Indian territory.

Pakistan has gone into overdrive, beheading Indian soldiers inside Indian territory. In a raid in the Poonch sector, its Battle Action Team massacred five Indian soldiers. The timing and intelligence of the adversary appear to be flawless as this killing has taken place at a time when the Maratha battalion was taking over from the exiting Bihar Regiment – a time when the units are not on a high state of alert.

In order to deter the China-Pakistan combine from inflicting war, India will need to rapidly equip its Army and the Air Force with deep offensive capabilities and phenomenal maneuverability even as it builds up a blue-water navy.

China excels in long-term strategic thinking; its shared ethnicity with the people of the North-East India enables its spies to blend in easily with the people in the North-East region. However, China is limited by language and facial features to mess with the Indian heartland and proxy Pakistan, with no such limitations intermingles with ease within India. Pakistan, in coordination with China, has now put pressure on the border. At the same time, it has helped instigate, with renewed vigour, ethnic cleansing of Hindus in Kishtwar and Doda. This move is similar to that of Kashmiri Pundits ultimately being dislodged from the Valley while New Delhi continued to indulge in despicable vote-bank politics.

As it was with China, the Pakistan Army claimed that it was not responsible for any incident on the borders. Meanwhile, the sloppy response from the Delhi Durbar has emboldened Pakistan High Commission to raise questions on internal matters concerning India. With the withdrawal of US forces from the region, the jihad factory will be idle. Pakistan can implode due to this situation of high unemployment. Therefore, to redirect the destructive energy of this force towards India to achieve foreign policy objectives and avoid implosion would be an imperative for Pakistan.

Pakistani journalists appearing on Indian electronic media in the second phase changed their tune from soothing ruffled feathers earlier to declaring ‘a fight to the finish’ for the independence of Kashmir and vacating Siachen. On monitoring comments in the social media, the chant from, “India and China should join hands to make the twenty-first century belong to South Asia” has shifted to “India, whether it likes it or not, has to live with China and Pakistan, now that the Americans are running away. It has no choice but to join us!”

The second phase by China and Pakistan will continue for some time to further weaken Indian borders and inject communal disharmony through covert operations till sufficient demoralization sets in, American withdrawal is complete and a large swathe of Afghanistan’s territory is controlled by the Pakistan Army with the help of its jihadi forces.

In the final phase, the Chinese game plan is to repeat a much larger version of “1962” by imposing a two-front war on India once the Western forces are out of Afghanistan. Many in the Indian military, the government and a few analysts erroneously believe that China will opt for a limited attack in Ladakh.

The coming years will witness the territorial integrity of the nation  under severe stress due to threats posed by the Great Chinese Game.

In the current globalised century, waging war attracts severe economic penalties on a nation with the long-term debilitating consequences. Therefore, the prize has to justify the cost-benefit-ratio. In what may be termed as a repeat of 1962, the China-Pakistan combine will impose war on India at a time of their choosing which may be sooner than one can imagine.

China will go for the jugular by landing its airborne divisions and choking the 200-km long Siliguri Corridor that is merely 28 km to 60 km wide. On one side, we have Nepal, which is now almost a colony of China. On the other side, Bhutan is under pressure from Beijing to toe its line. This implies that the entire North-East region may be cut off from the Indian mainland. Apart from this region adding to flank protection as far as Tibet is concerned, China will gain direct access to Bangladesh and easier access to Myanmar.

Simultaneously, Pakistan will attack the Western front to unhook Jammu and Kashmir from India after creating sufficient internal turmoil to soften the target. China has always supported and will readily accept Jammu and Kashmir to be part of Pakistan. In the event of Pakistani success, China can hive off large chunks of territory in Ladakh to suit its strategic interests. Besides, the key advantage to China will be securing the flanks of alternative supply route from Gwaddar to Xingjian Province. This two-front war will also guarantee China’s position as the undisputed leader in Asia substantially reducing the preeminence of the USA.

In order to deter the China-Pakistan combine from inflicting war, India will need to rapidly equip its Army and the Air Force with deep offensive capabilities and phenomenal maneuverability even as it builds up a blue-water navy. Indian intelligence agencies should gear up to support separatist forces inside Tibet and Pakistan. In addition, Indian foreign policy must decisively leverage the influence of democracies in Asia and the West, particularly the USA.

The coming years will witness the territorial integrity of the nation  under severe stress due to threats posed by the Great Chinese Game.

14 thoughts on “The Chinese Game Plan”