Rheinmetall books new ammo orders from the US armed forces

The United States Marine Corps has again contracted with Rheinmetall to supply it with special purpose and practice ammunition. The orders, worth around US$28 million (€20 million), make Rheinmetall a major supplier of medium-calibre ammunition to the US Marine Corps as well as underscoring the company’s global technological edge in a wide variety of calibres. 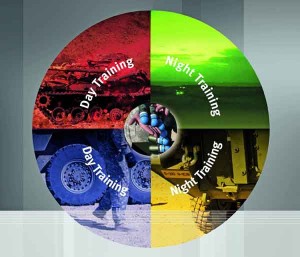 Over the past five years, the Marine Corps has placed over US$170 million in orders for 40mm ammunition made by Rheinmetall. Thanks to its subsidiary American Rheinmetall Munitions, Inc. of Stafford, Virginia, Rheinmetall maintains a permanent corporate presence in the United States, with local production capacity at its plant in Camden, Arkansas, where it produces the bulk of the ammunition ordered by the Marines.

Specifically, the current order encompasses M1110 practice ammunition rounds, whose production is already underway in the US. These non-toxic, low-velocity 40mm cartridges enable realistic training operations day and night. Moreover, they contain no explosives, meaning they will not cause bushfires on ranges or in training areas.

Furthermore, Rheinmetall will also be supplying the Marine Corps with 40mm tactical marking ammunition rounds. Made in Germany, these infrared cartridges make it possible to mark targets at ranges of up to 350 metres with infrared liquid this is invisible to the naked eye, but can be seen with a special night observation device.

Under an additional contract, won in the face of stiff American and international competition, Rheinmetall will meet the Marines Corps’ requirement for signaling coloured smoke grenades over a five-year period (2011-2016), thus gaining a foothold in another important segment of the US defence market.

The USMC simultaneously awarded Rheinmetall with a contract to develop a special insensitive propulsion unit for the MK 281 high-velocity practice cartridge, which Rheinmetall supplies to the Marines as well as US Army Special Forces.

This sophisticated propulsion unit will ensure that the propellant powder will not react in an uncontrolled way and pose a hazard to friendly forces during firing or in the event of a fire. Rheinmetall is a world leader in the development of insensitive ammunition, and already markets a number of ammunition types featuring this new technology.