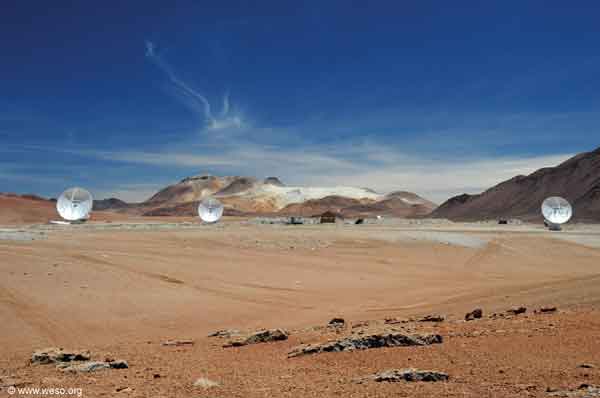 One of the world’s largest ground-based astronomical projects is being installed 16,597 feet above sea level in Chile’s Atacama Desert, which will help scientists to study the origins of the universe. Opened last October, the Atacama Large Millimetre/sub-millimetre Array, known as ALMA, will have spread 66 radio antennas near the spine of the Andes by the time it is completed next year. The $1.35-billion telescope, a joint project by the United States, the European Union, Canada, Chile, Japan and Taiwan, will explore some of the darkest, coldest, farthest, and most hidden secrets of the Cosmos. “We went to one of the most extreme locations on Earth to build the world’s largest array of millimetre/sub-millimetre telescopes having a level of technical sophistication that was merely a dream only a decade ago,” said Dr. Mark McKinnon, ALMA Project Manager. ALMA, which is under construction, is currently using 16 large antennas to see wavelengths of light that are much longer than what the human eyes can see. Eventually it will use 66 antennas.