Admiral Nirmal Verma, Chief of the Naval Staff, Integrated HQ of MoD (Navy), while delivering the inaugural address during the NAVARMS 2010: Emerging Trends & Opportunities in Naval Armaments, an International Seminar and Exhibition on Naval Armamments, organised by Confederation of Indian Industry (CII) and Directorate General Naval Armament Inspection, said that Indian defence imports stands at staggering 65 percent of the total defence acquisition. This trend can be reversed only through the active participation of the private sector industries. 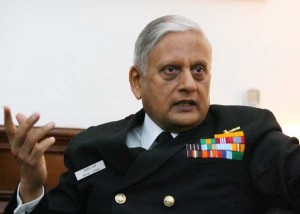 Compared to Defence Public Sector Undertakings and Ordinance Factories, private sector involvement in defence acquisitions is very low. There is a need to encourage private sector to promote indigenisation and achieve self-reliance as far as defence requirements are concerned.

Considering the abundance of scientific and technical manpower in the country, the Chief said that he was looking forward to seeing leading armament manufacturers of the world setting up armament R&D centres and production bases in India. Before concluding his address, the Naval Chief suggested that the private sector needed to synergise its strengths, compete domestically and globally, and aim at becoming net exporters, which is highly achievable.

Mr Satish K Kaura, Co-Chairman CII National Defence Council & Chairman and MD, Samtel Group, said that, “Defence industry has enough scope for everybody.” Industry has to get into defence production seriously and on a sustained basis. However significant technology and quality related investments are required. In order to make the best use of opportunities in the naval sector, conservative figures would suggest an amount more than 100,000 crores. Presently, most of the orders are with DPSUs. Therefore, there is a need to have a level playing field wherein private sector can also play a significant role. A strong defence industrial base with the active involvement of public sector can only fulfil all the present and futuristic requirements of Indian Navy that too on time bound basis and without any compromise with the quality of products.

AVM, Ajit Bhavnani (Retd), Chairman, CII Defence Sub-group on Aerospace & MD, Nova Integrated said that a nation’s strength is gauged by its defence preparedness. A nation should be able to efficiently protect its territorial integrity and internal security if it aspires to become a big player in the geopolitical theatre. It is an opportune moment to take a stalk of what we were, where we are and where we are heading towards. Besides, it is also an opportune moment to introspect and device ways and means to harness and consolidate the technological capabilities and expertise that the country have been able to acquire or develop over a period of time for best use to the nation.

The Chief of Naval Staff, Admiral Nirmal Verma, released a Study on Building India’s Navy: Force Requirements and Indigenous Capability during the inaugural session of International Seminar and Exhibition on Naval Armaments, NAVARMS 2010, organised by Confederation of Indian Industry (CII) at Manekshaw Centre on 24 November 2010.

The study identifies the gaps between the capabilities of the Indian Naval Industry and Indian Navy’s requirements. The study also suggests how these gaps can be bridged. Contrary to the common belief that Indian industry is incapable of delivering sophisticated systems and equipments, the study has found that the Indian industry does have the capability, competency and capacity to deliver high technology systems, products and modules provided some definitively encouraging measures are undertaken to promote the domestic naval industrial complex.