Prepare for the Next Great War 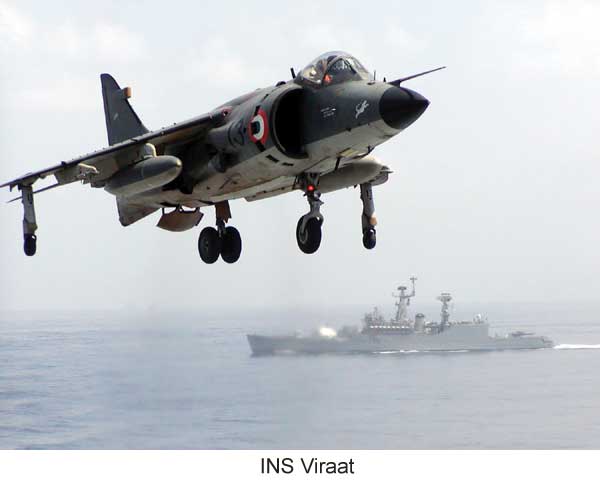 India remains Pakistan’s primary target and operating ground for Islamic fundamentalists and terrorist groups who infiltrate through Jammu & Kashmir (J&K), Nepal and Bangladesh and carry out anti-Indian activities with impunity.

As a rising economic power dependent almost entirely on foreign energy supplies, a time may come when India has to project its military power to protect and preserve the energy resources from Central and West Asia, and Africa.

Nepal is vulnerable to China’s influence. Its extremists have linkages with the People’s War Group (PWG) in India. In its bid to expand its influence, the PWG has carved a corridor ringing the states of Andhra Pradesh-Madhya Pradesh-Chhattisgarh-Orissa-West Bengal-Jharkhand-Bihar.

This endless internal turbulence in India is also inter-linked with external factors. To the North, India shares a 3,440 km long border with China, which can pose the entire spectrum of conventional, nuclear and missile threats. It can also influence and use as proxy India’s neighbors to weigh India down in every possible way.

In short, India’s 14,058 km long land frontier is impacted by a perpetually hostile or semi-hostile environment. Indian security stands threatened by demographic assault, arms and drug smuggling, and the safe havens that the insurgents have in India. Fundamentalist-religious groups in Bangladesh under Pakistani tutelage, West Asian finance and China’s patronage have synergized sufficiently to add to India’s security headache.

The grim reality is that the unending turbulence will continue to afflict our land and sea frontiers and airspace.

By nature, the average Indian is highly individualistic and an entrepreneur. In every endeavor, his calculation is simply based on, “What’s in it for me?” He does not have the time or the inclination to actively get involved with the intricacies of the nation’s security.

This kind of entrepreneurial society requires a steel frame of military, naval and air power to ensure that India’s accommodative temperament and societal characteristic of gentleness remains protected from the turbulent violence that assaults the values of our democratic polity.

On attaining Independence in 1947, India inherited possibly the best instrument of war in Asia – a fine battle-ready military machine with a formidable reputation of winning wars in distant lands. Britain had employed it skillfully for over a century to sustain her empire and treasured it as the jewel in its crown.

In the years after Independence, India’s Army has been unendingly deployed for internal policing tasks to cope with the complex security situation. This deployment has kept the Union of India physically intact. But it is sad that 60 years after Independence, the stability of India still depends directly on the stability of the Indian Army. Field Marshal Wavell who was India’s British Viceroy in 1946, was prophetic when he said “… the stability of the Indian Army may perhaps be a deciding factor in the future of India.”

For a number of reasons, and despite considerable efforts, the Armed Forces remain short of the manpower they need. It is imperative that this manpower shortage be removed speedily before the system buckles under the ageing profile of its leadership. There is only one viable strategy to attract the kind of talent that is needed and that is to assure military personnel of assured lateral induction into the para-military and police forces, the intelligence services and the civil administration.

Unfortunately, a consensus has not been achieved that “Lateral Induction” is the best way to attract India’s young but savvy population to the tough profession of arms, where risk-to-life is an everyday affair.

Major benefits will accrue from Lateral Induction. First, the transfer of highly disciplined, trained and skilled manpower to the civil set-up will contribute towards the creation of a ‘discipline culture’ in the country. Second, the superior training standards of lateral inductees will aid civil and para-military forces in combating terrorism and internal violence.

However, placing a large segment of a young Army on the land borders cannot entirely ensure the security of India. There are two aspects to it.

India has the potential and the prerequisites of becoming a great power within the next few decades, provided it can dovetail its foreign, economic and military objectives and mainstream its military power.

First, if a football team defends only its half of the field, it is certain that an adversary determined to create mischief, short of going to war, will create opportunities for its irregular forces (jihadis) to score goals through infiltration, smuggling and creeping invasions. The hostile environment that impacts India’s long frontiers requires that the role of military power to defend strategic frontiers must be firmly embedded in India’s foreign policy.

The second aspect is the need for political will to project the power of the Armed Forces beyond the Indian subcontinent to secure the sea-lanes for external trade and ensure the security of imported energy supplies.

India’s geo-strategic location with its 7,500 kms long peninsular coastline jutting into the Indian Ocean makes India a continental as well as a maritime power.

India impacts directly on East, West and Central Asia. As a rising economic power dependent almost entirely on foreign energy supplies, a time may come when India has to project its military power to protect and preserve the energy resources from Central and West Asia, and Africa. For India, with its pacifist temperament, this may sound imperial. But without a ruthless winning attitude, India’s multi-religious and multi-cultural society cannot survive endless undermining by disaffected elements.

The world has already recognized that with its democratic institutions, its liberal philosophy and its unique strategic location, India’s influence will extend beyond South Asia and directly affect Asia’s well being.

A nation’s foreign policy is dependent primarily on the strength of its economic and military power. The ability and the will to wield military power ruthlessly, to defend and advance national interests, when combined with the capacity and resolve to create wealth, constitute the proven route for every aspirant seeking recognition as an eminent power.

…to preserve its values, India needs to create an international alliance with like minded technologically surplus ‘far abroad’ to out maneuver the inimical intentions of the ‘near abroad’.

India has the potential and the prerequisites of becoming a great power within the next few decades, provided it can dovetail its foreign, economic and military objectives and mainstream its military power.

The crucial question is whether India will be a surrogate power or be a ‘great power’?

Ostensibly, our national objectives are to have a peaceful neighborhood. What should be the strategy to achieve it? Statements like “…stable and secure neighbors are in India’s interest” are well meant. The fundamental question however is – “Will India’s neighbors ever be stable and secure?” Appeasement of neighbors cannot constitute a strategy for any country.

India’s larger objective in Asia is to emerge as a geo-economic hub that can integrate and influence its extended neighborhood through mutually beneficial economic linkages and military relationships. As a benevolent power that has no external territorial interests, India is uniquely located – geographically and culturally to play this role effectively. India’s free media can be intelligently harnessed to further these national objectives and develop the complementarities that influence Asia.

To attain eminence in Asia, India needs to move simultaneously on three axes. These are India-West Asia, India-Southeast Asia and India-Central Asia. Of these, the critical one is the India-Afghanistan-Iran-Russia axis. Today, Russia is reacting firmly to intruders into its neighborhood. Her economic and military resurgence presents an opportunity for a relationship which would lend stability to the region.

…as the second largest consumer of oil and gas in Asia, the assurance of uninterrupted energy supplies is a vital factor in India’s security calculus…

Moreover, as the second largest consumer of oil and gas in Asia, the assurance of uninterrupted energy supplies is a vital factor in India’s security calculus. By 2010, a substantial amount of oil and gas will be sourced from Central Asia. This resource-rich region will succumb to fundamentalist-religious Talibanisation if India and like-minded countries do not pre-empt it. In such an eventuality, American oil corporations will be expelled, particularly with the Chinese gaining ground and occupying positions that could dictate the future agenda in Central Asia. It is therefore timely for American capitalists to join hands with Indian counterparts in joint ventures.

India’s ‘near abroad’ is under unprecedented turmoil. Pakistan is almost split into two states. The Pakistan Army controls one part and the other it ceded to Radical Islam. The Pakistan Army appears to be under retreat. In Bangladesh the war between Pakistan backed radical Islam threatens to undermine the present regime. Maoists in Nepal look up to China. Beijing successfully out maneuvered New Delhi’s influence in the latter’s backyard. These regimes being authoritarian in one way or the other have more in common amongst themselves than a multi-cultural democratic India.

They are also technology deficit regressive states. Therefore, to preserve its values, India needs to create an international alliance with like minded technologically surplus ‘far abroad’ to out maneuver the inimical intentions of the ‘near abroad’. The international community including Russia in the near future, will be compelled to wage the next Great War against the forces of Radical Islam threatening the world at large. As the core of Jihad is located in a state wielding nuclear weapons, the evolving scenario appears to be more threatening than witnessed during Nazi Germany. New Delhi’s support in the looming next Great War will be a critical element for swift victory for democracies and others.

11 thoughts on “Prepare for the Next Great War”