The  message clarifies that the information contained in it  came from “own sources, AFP, AP, Al-Jazeera, Pentagon, White House, et al”. An earlier message of April 6, 2009, from ECOTERRA INTERNATIONAL had said: “With the latest captures and releases now, still at least 17 (18 with an unnamed sole Barge which drifted ashore) foreign vessels with a total of not less than 297 crew members accounted for (of which 110 are confirmed to be Filipinos) are held in Somali waters and are monitored on our actual case-list, while several other cases of ships, which were observed off the coast of Somalia and have been reported or had reportedly disappeared without trace or information, are still being followed. Over 134 incidents (including attempted attacks, averted attacks and successful sea-jackings) have been recorded for 2008 with 49 fully documented, factual sea-jacking cases (for Somalia, including presently held ones) and the mistaken sinking of one vessel by a naval force. 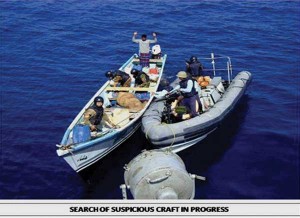 For 2009 the account stands at 52 averted or abandoned attacks and 14 sea-jackings on the Somali/Yemeni pirate side as well as one wrongful attack by friendly fire on the side of the naval forces. Mystery pirate mother-vessels Athena/Arena and Burum Ocean as well as not fully documented cases of absconded vessels are not listed in the sea-jack count until clarification. Several other vessels with unclear fate (also not in the actual count), who were reported missing over the last ten years in this area, are still kept on our watch-list, though in some cases it is presumed that they sunk due to bad weather or being unfit to sail.  In the last four years, 22 missing ships have been traced back with different names, flags and superstructures.”

Despite the deployment of anti-piracy patrols from a number of countries including India, China and Japan, the Somali pirates continue to operate with virtual impunity and have been collecting millions of dollars in ransom money. The vast area involved, the inability of the international community – due to legal and operational reasons–to undertake land-based operations against the pirates in Somalian territory and the suspected (by me) lack of co-ordination among anti-piracy patrols from different countries have come in the way of effective and deterrent action against the pirates, who are becoming more and more audacious and innovative.

Also read: India in the neighbourhood

A number of questions remain unanswered: Are different pirate groups operating autonomously of each other or is there a common command and control? Who are the leaders of the different pirate groups and where are they based? Apart from the pirates themselves and their leaders, are there any other beneficiaries of the ransom money? Since Al Qaeda has been very active in Somalia for over a decade, does it have any links with the pirates and is it financially benefiting from the ransom payments?

The possibility of links between Al Qaeda and at least some of the pirate groups needs to be taken seriously. Ever since 9/11, Al Qaeda has been wanting to organize a major act of maritime terrorism to disrupt word trade and movement of energy supplies. Many of these pirates–if well-trained and well-motivated by Al Qaeda–could provide a new source of oxygen to it. The time has come to treat the campaign against the Somali pirates as seriously as the campaign against Al  Qaeda.