Home  >  News  > Homeland Security  >  Nagaland: The Beginning of Insurgency – I

Nagaland: The Beginning of Insurgency - I

The Army is Called Out

NNC formally declared the formation of Federal Government of Nagaland (FGN) in March 1956, and hoisted its flag at Phenshinyu, some 40 km from Kohima, in the Rengma area. A parliament (Ho Ho) of one hundred members (Tatars) and a president (Kedaghe) with 15 ministers (Kilnosers), governors, magistrates and many other officials with the trappings of a full-fledged government was announced. The Naga Home Guards, which was by now 3,000 strong and armed with weapons left behind by Allies and the Japanese after the end of fighting in World War II, constituted the army of the underground.17 The Government of India intervened by sending troops of its regular army to quell the rebellion. Maj Gen RK Kochar was appointed the General Officer Commanding Naga Hills and Tuensang in April 1956.

The ambush party had consisted of two to three hundred Nagas. The assembly and concealment of such a large body of hostiles demonstrated the skill of Nagas in guerrilla warfare.

The Army began its operations in September 1956 and by the year end 619 rifles (including muzzle loaders), eight machine guns, 17 sten guns, and some other arms and ammunition were seized or recovered.18 But the hostiles were by now fairly well organised and had intimate knowledge of terrain and an efficient intelligence network. In a well-planned action the hostiles ambushed a road protection party of one junior commissioned officer and thirty-two other ranks of 9 Punjab on road Khonoma-Jaluke on April 1, 1957 and killed all except one who survived to tell the tale.19 The ambush party had consisted of two to three hundred Nagas. The assembly and concealment of such a large body of hostiles demonstrated the skill of Nagas in guerrilla warfare.

The hostiles attempted seize of Kohima in June 1956 led by Kaito Sema and Tungti Chang.20 The town was attacked from three different directions on June 10, 1956. The rebels cut off telephone lines, electricity, water supply and destroyed few bridges. The army sent reinforcements, which brought the situation under control.

With the intensification of operations by the army, Phizo thought it prudent to flee Nagaland. He escaped to Dacca, then the capital of East Pakistan, taking the North Cachar route to cross the border on December 6, 1956. He had attempted to sneak into Pakistan earlier in 1952 through Burma but was captured by the Burmese and sent back to India. He was subsequently released on compassionate grounds when his wife met with an accident while travelling in a jeep near Khonoma. Phizo was welcomed with open arms in East Pakistan.

The convention inter-alia asked for the formation of a separate state to be named Nagaland within the Indian Union, which virtually over turned the plebiscite held by the supporters of Phizo

After a prolonged stay of three years in Dacca, he went to London via Zurich on a Peruvian passport with the help of Michael Scott, about whom we will hear more in the narrative. He died in exile in Britain on April 30, 1990.21 His body was brought to India by a chartered flight and then taken to his village Khonoma where he was buried.

Naga Hills witnessed much violence between 1956-58. There was, however, a silver lining in the dark clouds. Many moderate Nagas who saw the futility of violence joined the Peace Committee, which was formed at the initiative of the government. The first convention of all Naga tribes, called the Naga People’s Convention (NPC) was held from 22 to 26 August in Kohima on whose recommendation the Naga Hill District and Tuensang Sub Division of NEFA were amalgamated to form Naga Hill-Tuensang Area (NHTA) on December 1, 1957.

This new unit was administered by the President with the Governor of Assam as his agent and through the Ministry of External Affairs. In order to create a proper atmosphere for the new administration to function, an amnesty was declared and in the hope that hostiles would respond, further grouping of villages was stopped and it was made known that degrouping of villages would take place as and when situation improved. On their part the delegates gave up the demand for independence.

The second convention of NPC was held in May 1958 at Ugma where a liaison committee to contact underground leaders was formed. The historic third convention was held in October 1959 at Mokokchung and was attended by 3,000 delegates drawn from all Naga tribes. The convention inter-alia asked for the formation of a separate state to be named Nagaland within the Indian Union, which virtually over turned the plebiscite held by the supporters of Phizo in 1951. The church leaders also gave a call for peace. A delegation met Nehru in July 1960 with the proposal, which was accepted and came to be called the Sixteen Point Agreement. 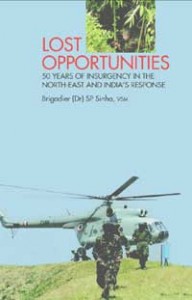 President Dr Radhakrishnan inaugurated the new State of Nagaland on December 1, 1960 on the basis of the above agreement, which was earlier signed by the Government of India and the Naga delegation. A crowd of 10,000 Nagas had lined up the three-mile route from the high school helipad to Raj Bhawan in Kohima to welcome the President; an expression of peoples enthusiasm on the creation of the new State of Nagaland.

The Governor, Gen Srinagesh, swore in an Interim Executive Council headed by Shilu Ao on March 16, 1961. After the transitional period of three years elections to the new state assembly were held from 8 to 18 January 1964 in the Naga Hills except Tuensang. Two political parties, the Nagaland Nationalist Party and the Democratic Party participated in the elections. The former won 34 seats and the latter 12. Despite threats from the underground, to boycott the election, 74 per cent voters cast their votes.22

A new state government was formed under the leadership of Shilu Ao, who became the first Chief Minister of Nagaland. The successful election was a resounding expression of people’s mandate for peace. Unfortunately the hostiles saw this as a slap on their face and expressed their frustration by stepping up violent activities.