Aerospace major Lockheed Martin is developing an unmanned helicopter called the Kaman K-MAX that will fly without a pilot and will carry 6,000lbs of cargo at a maximum speed of 92 mph. 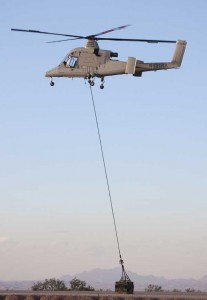 It will transport equipment to troops at forward locations thus reducing the need for large vehicle convoys and lowering the risk of soldiers being ambushed or injured by Improvised Explosive Devices.

This will reduce troop losses in the war zone. Controlled by a ground-based operator, it can be flown into areas under fire without risk to aircrew or in weather conditions that would ground other helicopters. It can also be flown hands-on from the cockpit if required and uses counter-rotating intermeshing rotor blades to generate its lifting power.

The K-MAX can winch four different loads on its cargo hook and each can be programmed to release at different times.