The Ministry of Home Affairs, Government of India issued a new political map of India on 02 November 2019, which has not only rattled Pakistan but also ruffled many feathers including a shut up call to the likes of Dr Farooq Abdullah who had publically challenged the Government of India’s stance on Pakistan Occupied Jammu & Kashmir (POJK). Farooq Abdullah is in his true colours when out of power.

Unfortunately, most of the previous governments have maintained a low-key stand on the issue of POJK despite claiming entire J&K to be its integral part.

In November 2016, addressing his party workers at Kishtwar daring Narendra Modi government to reclaim POK he said, “Arre tumhare baap ka hai kya? Tumhare pass wo taqat nahin hai ki tum wo hissa vapas le sako (Is it the property of your forefathers? You don’t have the power to take that territory back).” This statement drew sharp criticism and must have definitely hurt the nationalistic pride of those in power.

In November 2017, he again said, “I tell them in plain terms – not only the people of India, but also to the world – that the part (of J&K) which is with Pakistan (PoK) belongs to Pakistan and this side to India. This won’t change. Let them fight how many wars they want to. This won’t change.”

In December 2018, he openly said that POK belongs to Pakistan. Incidentally, Farooq was a member of the Lok Sabha when it passed a unanimous resolution in November 2014 regarding POK being an integral part of India. The then Parliament also affirmed that India has the will and capacity to firmly counter all designs against its unity, sovereignty and territorial integrity.

Farooq had not only supported the resolution but also spoken in its favour. But when in political wilderness not only him most of the Kashmiri leaders including his son have maintained a pro-Pak stand on this important strategic issue pertaining to nation’s territorial integrity. Such were the political compulsions of the government’s at Delhi that their statements usually went uncontested. However, internationally it portrays a divided domestic opinion on this important issue.

Unfortunately, most of the previous governments have maintained a low-key stand on the issue of POJK despite claiming entire J&K to be its integral part. There is no denying the fact that Maharaja Hari Singh had acceded his entire princely state to India on 26 October 1947. 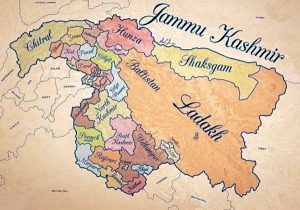 The state of Jammu and Kashmir covered an area of 86024 square miles (prior to 1947) extending from 32deg 78′ to 36deg 58′ N and from 73deg 27′ to 80deg 72′ E. The tiny state of Chitral, located towards the north-western side of Gilgit, used to pay tribute to Dogra rulers. Shaksgam was the grazing area of Raja of Hunza. It was due to the untiring efforts of Maharaja Gulab Singh Ji (the founder of Dogra Hindu dynasty in Jammu &Kashmir) that the State took its shape and form in the 2nd half of the 19th century.

Accept for initial noises made by India during the discussions at UN up to 1957, India virtually seemed to have given up its claim on POK (which India insisted included the so-called Northern Areas as well).

According to the census reports of 1911, 1921 and 1931, the administration was organised as follows:

In the 1941 census, further details of the frontier districts were given:

Gilgitwazarat: Tehsils of Gilgit and Astore

Gilgit district and Frontier Areas were administered by the British Administration as the Gilgit Agency due to the strategic location of the region which had emerged as a strategic hub of the Great Game between the British Empire and the Soviet Union led communists. The British Empire apprehended the spread of red corridor to British India through this region. It was, however, returned to the Maharaja on 01 August 1947, well before he acceded to India. The boundary of the State in the North followed the MacDonald Line drawn by the British who were administering the Gilgit Agency.

The entire state of J&K including all the territory mentioned above acceded to India via the Instrument of Accession signed by Maharaja Hari Singh on 26 October 1947. However, through an armed aggression thereafter Pakistan illegally captured 74000 Sq km of the princely state, which legally had become Indian Territory. Thus on 01 January 1949, after unilateral ceasefire announced by India, Pakistan remained in illegal occupation of 89% of Mirpur District, 60% of PoonchJagir and 87% of Muzaffarabad District and called it Azad Kashmir. 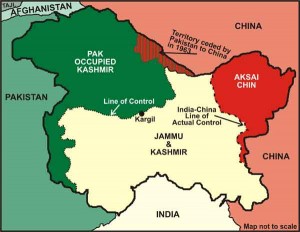 The entire area of Gilgit Agency, Gilgit District and Skardu also was in Pakistan’s control and was named Northern Areas. Thus Pakistan divided the territory of unified J&K State in 1949 itself. Accept for initial noises made by India during the discussions at UN up to 1957, India virtually seemed to have given up its claim on POK (which India insisted included the so-called Northern Areas as well). In 1963, Pakistan ceded the area of Shaksgam Valley to Pakistan. Though de jure entire J&K is part of India, de facto part of the state came under Pakistani and Chinese control.

India’s lack of interest in POK, was exploited by Pakistan through shifting the international focus towards J&K and building the new narrative of it being a disputed territory and a potential flash point. During the period of Cold War, it successfully garnered the support of Western Powers, Islamic World and China. Its efforts to snatch it militarily failed miserably. India lost the golden opportunity of undoing the historical blunder after its splendid victory over Pakistan in 1971.

Cries of “Kashmir Banega Pakistan” became common on the streets of Kashmir.

However, India squandered that opportunity and continued with its status quo policy viz a viz POJK  till Pakistan launched a proxy war against India and introduced religious militancy in Kashmir through launch pads established in POK in early 1990s. This emboldened the separatist and secessionist forces in Kashmir who used the special status given through Articles 370 and 35A as a licence to alienate the Kashmiris by creating a wall between them and rest of the country.

Cries of “Kashmir Banega Pakistan” became common on the streets of Kashmir. Encouraged by the drifting situation in Kashmir Pakistan introduced jihadi terrorism followed by radicalisation and got deeply involved in the turmoil in Kashmir. Unfortunately, even after the Indian Parliament’s resolution of 1994, which India was compelled to adopt as a counter to Pakistani resolution of 1993 passed with tacit American approval, India made no visible efforts to put into reality the resolve of the Indian Parliament.

On the contrary, Manmohan Singh led UPA government through track 2 diplomacy discussed various measures with Pakistan that included maintenance of territorial status quo, demilitarisation in Kashmir, dilution of the Line of Control for allowing free movement of people and goods, a tripartite joint mechanism to take decisions about Jammu and Kashmir for a specified period pending which a final solution would be found.  Some Pakistani observers and Kashmiri groups also spoke about the currency of the two countries to be a valid tender in Jammu and Kashmir.

The current dispensation maintained that there was nothing as Kashmir Dispute, if any dispute existed it was about the vacation of POJK.

In a press conference held on January 3, 2014, Manmohan Singh, then PM, revealed, “That secret envoys from India and Pakistan had almost arrived at a meeting to resolve the conflict on Kashmir. When a breakthrough appeared ‘in sight’, General Pervez Musharraf had to make way for other leaders and the agreement got blocked.” BJP strongly opposed it because it neither believed in status quo nor in demilitarisation of Kashmir without Pakistan dismantling the terror infrastructure.

After the BJP came to power in 2014, it promised to the nation elimination of terrorism and a lasting and permanent solution to the Kashmir turmoil. The current dispensation maintained that there was nothing as Kashmir Dispute, if any dispute existed it was about the vacation of POJK. The government also tried to change the Pak narrative through deft diplomatic manoeuvres. India finally turned the table on Pakistan on 05 August, 2019 when through an epoch-making decision it announced abrogation of Article 370 and Reorganisation of J&K State in two UTs of J&K and Ladakh.

Home Minister thundered on the floor of the house that when he referred to J&K, it included POJK as well. India had successfully changed the narrative. It sent shivers down the spine of Pakistani political and military leadership. POJK which till recently was considered by Pakistan as its strategic asset all of a sudden became its Achilles Heel. The world saw a new assertive India.

The new map issued by MHA (given at top), is the replica of this assertiveness. It has made clear to Pakistan that J&K is an integral part and what it does to clear the turmoil is its internal matter and Pakistan has no locus standi. It has also asserted its claim on POK by including the districts of Mirpur and Muzaffarbad along with the remainder area of Poonch as part of J&K UT. Except for Kargil district all areas coming under Gilgit, Gilgit wazarat and Frontier Illaqas have been included in Leh District of Ladakh UT.

China has also been subtly conveyed that while India is not opposed to its Belt Road Initiative (BRI), it certainly is against the China-Pakistan Economic corridor (CPEC) because it violates its sovereignty.

China has equally been conveyed a strong message about India’s desire to safeguard its territorial integrity. China has also been subtly conveyed that while India is not opposed to its Belt Road Initiative (BRI), it certainly is against the China-Pakistan Economic corridor (CPEC) because it violates its sovereignty.

It is a forceful political & legal assertion of three western districts namely Mirpur, Poonch and Muzaffarabad being part of India and it reserves the right to liberate them or assimilate them if the residents of these areas decide so. It is the true manifestation of the 1994 parliamentary resolution. Similar is the assertion of the legal claim of all northern territories which now form the part of Ladakh UT. It also strengthens India’s stand that legally Pakistan does not share any border with China and hence China-Pakistan Border Agreement of 1963 is legally invalid.

The new map (given at top) apart from showing the reorganised state of J&K conveys many political and strategic messages as enumerated in the article. It also reflects new India’s determination of shedding the  image of a weak status quoist nation.