Is the Indian Soldier Overloaded?: Right Sizing the Armed Forces 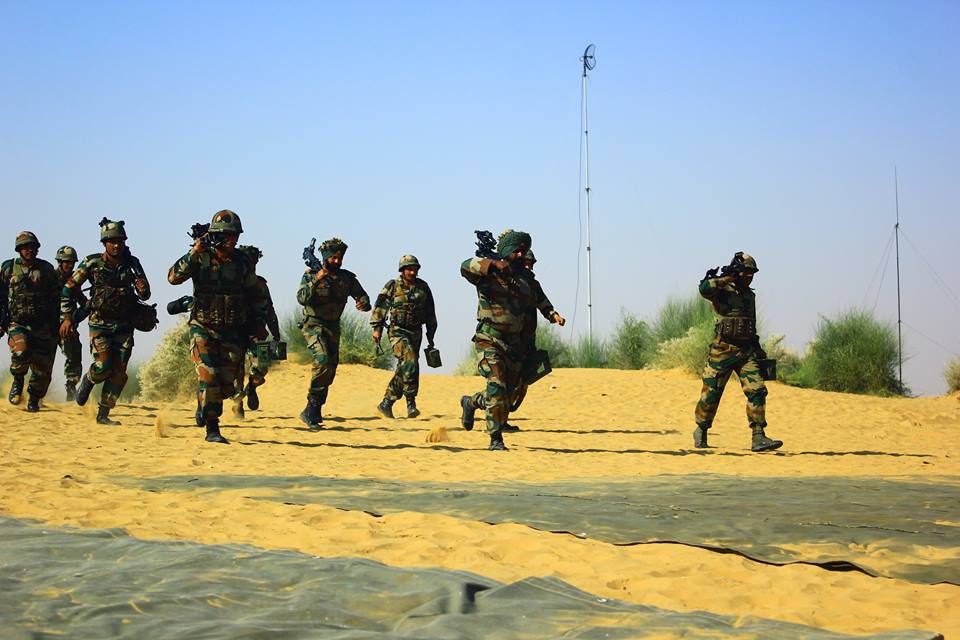 It is of interest that we have consistently maintained armed forces that give one soldier to support a population of about 900 persons. This gives us a metric or at least some view of how to come up with the size of the armed forces. Let us say the armed forces of a nation should have as many numbers of active soldiers so as 1,000 civilians are supported by one soldier. That is the minimum for any country in this modern world. This also creates the reverse dependency that 1,000 civilians need to earn that much profit that they can afford to maintain at least one modern soldier.

In the high-entropy 2020 world, getting the re-formatting lessons from the Covid-19 Pandemic, a question that comes to the surface – not that it was not there before – is the size of armed forces we should maintain in terms of number of active soldiers. Obviously, it depends upon the legacy, the historical organisation structures, doctrines, Standard Operating Procedures, type of force mix, threat perceptions and capabilities and many more quantifiable, subjective and even unknown factors. The crux of the matter is that it is not a simple or a trivial way to come up with the right answer. One can perhaps come up with some guess on the basis of a complex interplay of the above factors and yet will be constrained by the information that is available versus the ground reality that may not be visible to even the most astute analyst or observer. At best, some range of numbers can be perhaps attempted.

In trying to answer the above question, we looked at the data of what exists as armed forces of India. We picked up data available from IISS Military Balance of four specific years 2009, 2014, 2019 and 2020. Table shows the number of active soldiers and the population of India in those years. There is a general increase in number of active soldiers in all these years and also there is increase in population. The year 2020 data shows the population to be 1.311 billion and active soldiers as 1.456 million. Let us look at this data and see from the point of view of how many civilians a soldier supports.

We define a simple ratio of the two numbers of the population and number of active soldiers to call this metric as Population Supported Per Soldier (PSPS). For the four years 2009, 2014, 2019 and 2020 data for India PSPS comes out to be 896, 922, 898 and 901 respectively, as shown in the Table. India has been consistent, more or less in maintaining the number of soldiers so that each soldier supports about 900 civilians in these years. We must mention here we are not concerned at this moment about what that soldier does, whether the soldier is from the Indian Navy, the Indian Air Force or the Indian Army. Furthermore, the soldier is a combat soldier or combat support soldier or from medical or logistics branch also is not what we are looking at.

It is of interest that we have consistently maintained armed forces that give one soldier to support a population of about 900 persons. This gives us a metric or at least some view of how to come up with the size of the armed forces. Let us say the armed forces of a nation should have as many numbers of active soldiers so as 1,000 civilians are supported by one soldier. That is the minimum for any country in this modern world. This also creates the reverse dependency that 1,000 civilians need to earn that much profit that they can afford to maintain at least one modern soldier. The reverse problem we will consider in subsequent articles. Let us focus on the forward part of the equation.

We take 1,000 PSPS as the base use it to set the Armed Forces Size Index (AFSI) with value 1.0. The AFSI of a country is the ratio of 1,000 (the threshold) and the actual PSPS of the nation. If this index is more than 1.0, then it means that each of their soldiers supports less than 1,000 citizens. The greater this index, more is the relative size of the Armed Forces of the country. 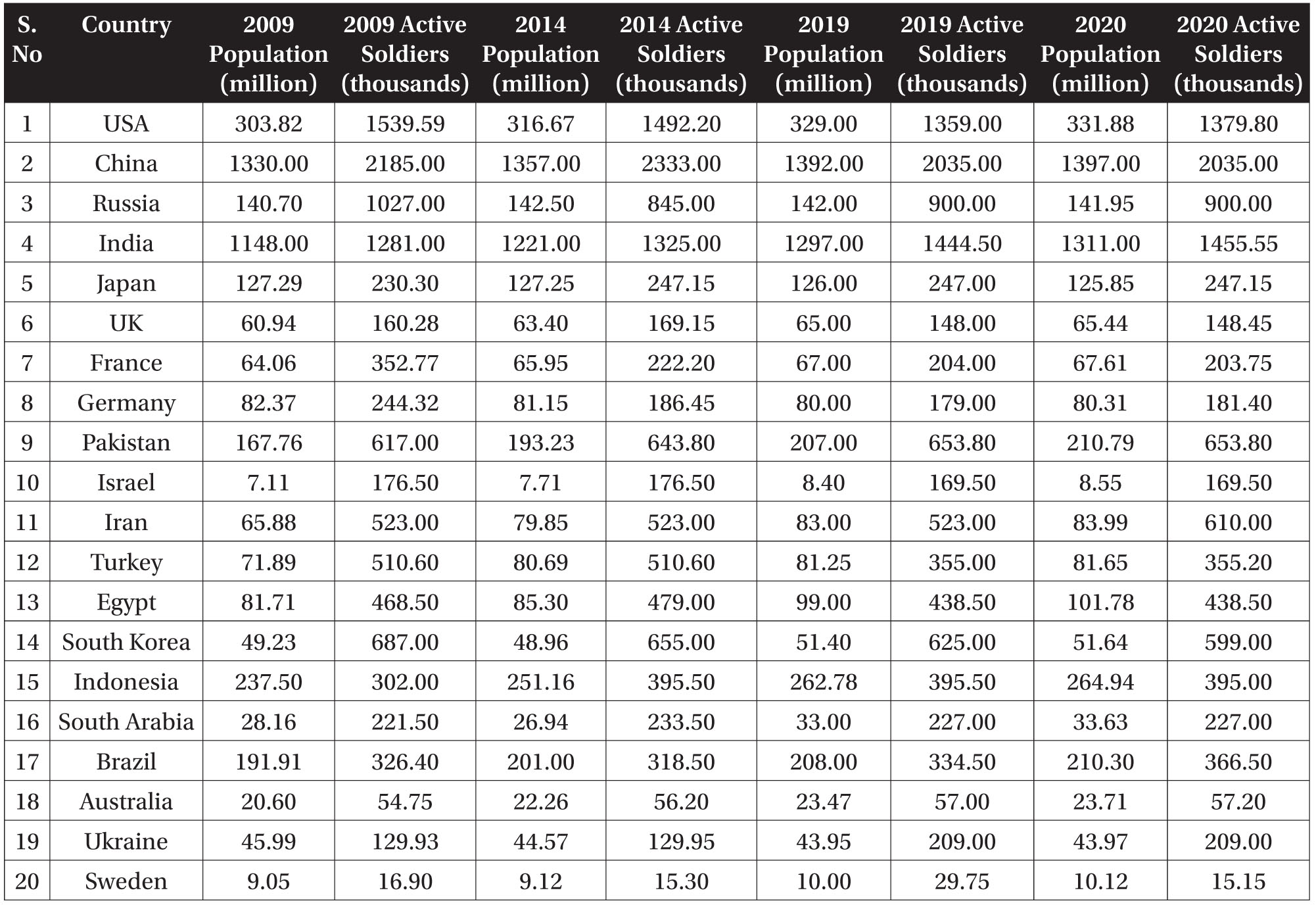 The Indian Soldier: Highest Loaded Soldier in the World!

India’s AFSI has remained just above the base case of 1.0 for the last decade or so as we can see. It is just ten percent more than the base case which indicates that India has been maintaining a purely defensive force posture and keeping the size of its armed forces just enough for an overall strategic defence posture.

Let us look at China, another high population global power. Chinese AFSI has also remained at less than 2.0 and now it is 1.46 which is higher than India yet it is much lower than that of the US which has an AFSI of 4.16 now.In 2009, it was above 5. Russia with an AFSI of above 6.0 compares with the US. UK, France and Germany have steadily decreased their AFSI; but still they have kept it above 2.0. Israel with close to 20 and South Korea with 11.6 are the only two nations in our list that have maintained their AFSI above 10. Japan is another major power that has kept its AFSI below 2.0, besides the heavily populated Indonesia. Pakistan’s AFSI has remained above 3.0 for the decade based on the data for four years. 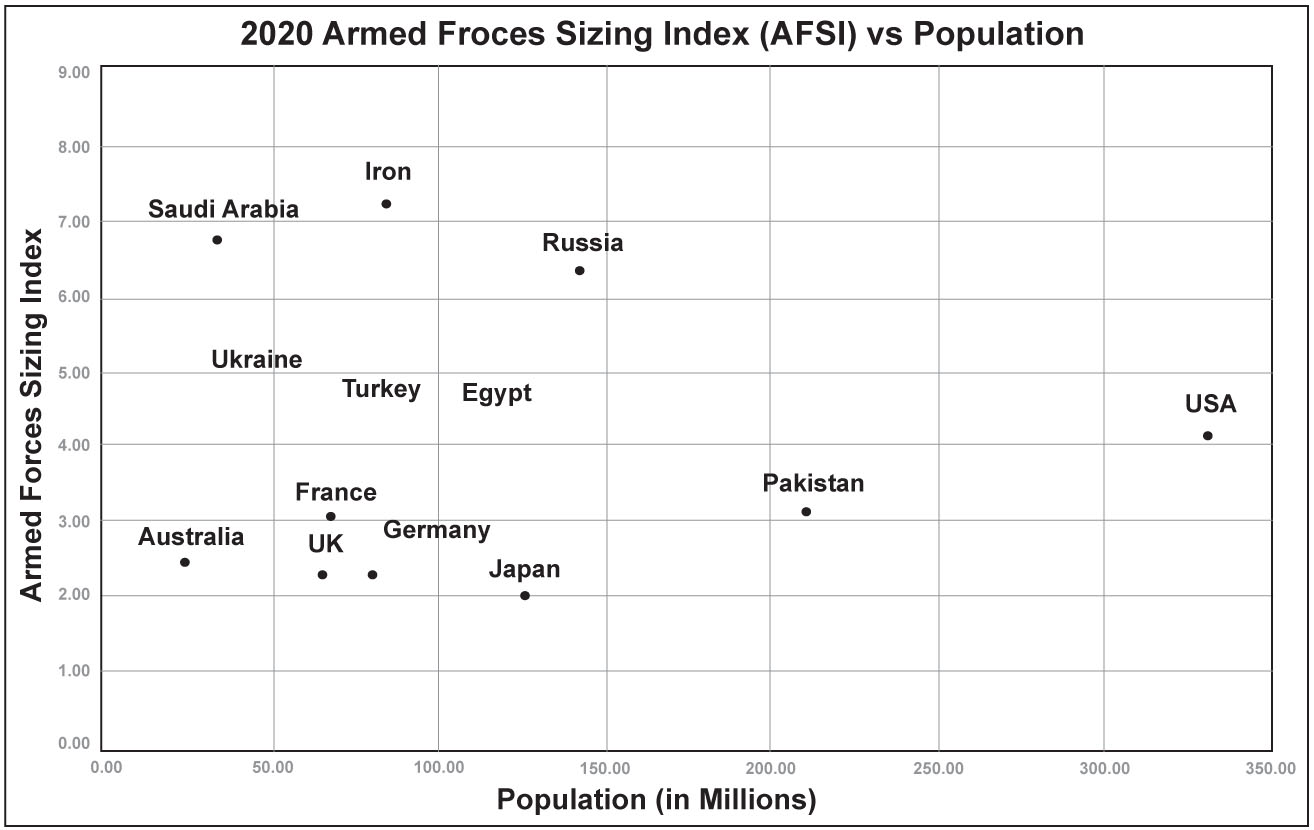 When we plotted the AFSI for year 2020 on Y-axis against population of the 20 countries we get the picture as shown below. Highly populated nations such as China, India and Indonesia have AFSI below 1.8. Countries like Sweden and Brazil also has AFSI below 1.8, in the year 2020. Countries that are in high military threat environments have extreme AFSI. i.e., above 10.0. These are Israel and South Korea in our list.

Let us see the picture without including the nations with AFSI below 1.8, i.e., China, India, Indonesia, Brazil and Sweden and also nations with AFSI above 10.0, i.e., Israel and South Korea. USA has highest population in the list now with AFSI above 4.0. Pakistan has an AFSI above 3.0 in 2020 and is the second most populous country in our reduced list. Saudi Arabia, Iran and Russia have highest AFSI value of above 6.0. Next comes Ukraine, Turkey and Egypt with an AFSI above 4.0. If one sees, UK, Germany, France, Japan and Australia have maintained their AFSI below 3.0 or near about. Are these nations right-sizing their armed forces? 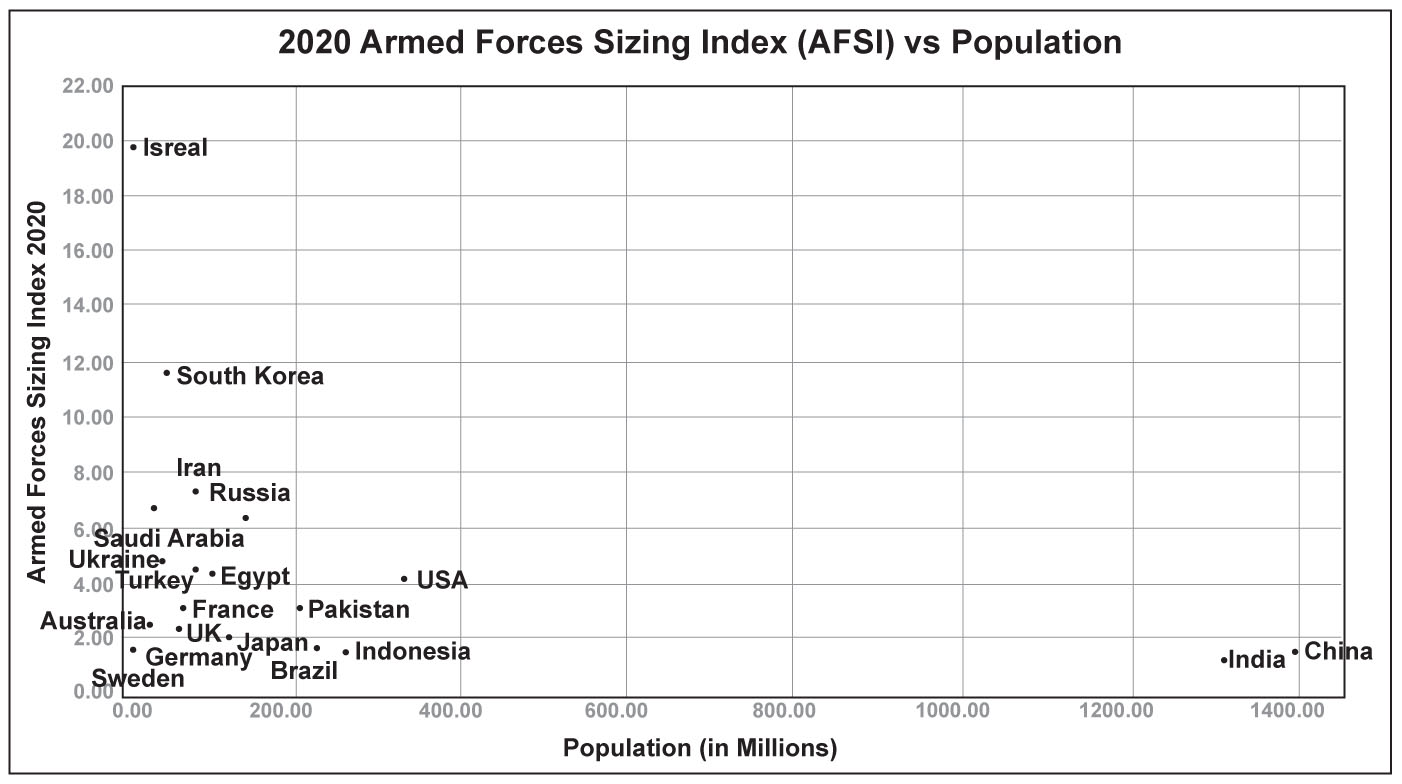 Irrespective of answer to the right size of armed forces of a nation based on its population alone. One fact from above is clear, India has been keeping its armed forces much below the right size if one compares with all other countries of the world. A surprising fact, indeed.

One key message is that although other powers including China are generally reducing the number of soldiers in their armed forces, the numbers for India have increased in the past decade. However, from the point of view of right sizing the armed forces, India can further increase its armed forces sizing index to at least 1.46 (which is what China has in 2020) from the current 1.11. Potentially, this means India can increase the number of active soldiers to about 1,914.51 thousand from the present 1,455.55 thousand. This is an increase of 458.96 thousand.

In 2018, Ravi Rikhye produced an analysis of what India needs to fight a two-front war or two-and-a-half-front war with China and Pakistan, simultaneously. It was published as a Kindle book ‘Analysis of India’s Ability to Fight a Two-Front War 2018’. The main conclusion of Ravi’s analysis is that the Indian Army is short of its intended missions of victory in a two-front war. He estimates the need for a 72-division Army for a decisive victory and a 54-division Army for holding onto a two-front simultaneous war against Pakistan and China. He claims that,currently, the Indian Army with 38 to 39 Divisions will not be able to hold onto a two-front high-intensity war against both China and Pakistan. He further states that this state of affairs stems from what he calls the ‘just-enough’ syndrome of India.

Our analysis above based on the Armed Force Sizing Index (AFSI) of 20 key countries of the world for the last decade, clearly shows that India has been maintaining its defence forces just above the bare minimum. To maintain parity with China on the AFSI Index, India needs to raise its defence forces (in terms of number of soldiers) by about 450,000. This number actually can raise the number of divisions by about 30 which compares very well with Ravi Rikhye’s 72-Division force.

We have introduced a simple metric to estimate the size of the Armed Forces needed by a nation in the modern world. A soldier for every 1,000 citizens is the minimum size for any country. To our surprise, we found in our analysis that India is the only country that is close to this number, i.e., we have maintained one soldier for about 900 of our citizens. This is what makes our soldier overloaded and also the size of our Armed Forces way below the required level required for the size of our nation. For example, if we have to raise our AFSI to the level of China, we need to add roughly about 450,000 soldiers more to our existing force levels. This is a counter logic to the established wisdom.

This analysis neither takes into account the economics nor the affordability of such a force. It does not include the level of GDP, technological factors, threat levels and doctrinal innovation either. However, this basic analysis clearly gets support from analysts of India’s ability to win a two-front war. In future, we will analyse the affordability as well as work out a more involved model of the right sizing of the Armed forces. The conclusions from this analysis, however, are glaring in terms of our ‘just enough’ syndrome when it comes to the issue of defence of India.

One thought on “Is the Indian Soldier Overloaded?: Right Sizing the Armed Forces”