Home  >  News  > Geopolitics  >  IS Strikes South Asia: Are India and China Next?

IS Strikes South Asia: Are India and China Next? 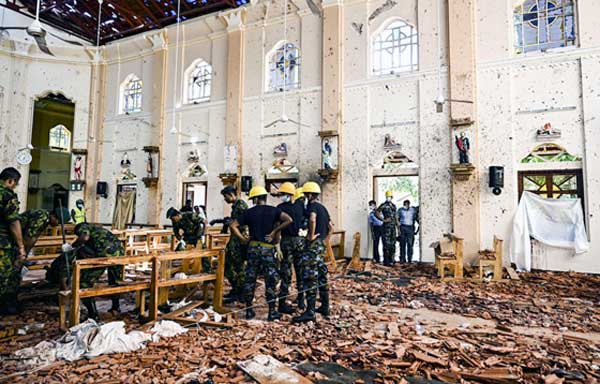 Security personnel inspect the interior of St. Sebastian’s Church. The bombings occurred in at least five other locations, including three Colombo hotels: the Cinnamon Grand, the Shangri-La Hotel, and the Kingsbury Hotel.

After the IS caliphate was decimated, USA and multinational forces including some groups like Kurds supporting them announced victory over Daesh. It was however well anticipated that despite the caliphate being decimated, Daesh will get dispersed itself into smaller fragments and try to merge themselves in the areas where they have supporters of their ideology. There network of sleeper cells was intact and with recent appearance of their leader Abu Bakr al Baghdadion video, indicates that their leadership is also intact. The danger of its fragments finding new hosts remains a challenge for global community, especially where concentration of its supporters is high or perceived atrocities to Muslims are high(in the perception of Daesh, which need to be avenged).

It was however well anticipated that despite the caliphate being decimated, Daesh will get dispersed itself into smaller fragments and try to merge themselves in the areas where they have supporters of their ideology.

When Sri Lanka was rocked by one of the worst terrorist attacks of recent times on April 23, 2019, where over 250 died in and over 500 were injured, the investigations indicated  that these attacks were well coordinated and carried out by radicalised locals, at behest of IS. This evidence was further strengthened by IS Chief taking responsibilities for the same, linking it with killings of Muslims by Christians in various parts of the world. The idea of avenging decimation of caliphate by multi-national Forces (with majority of Christian forces), attack on Mosque in Christchurch, New Zealand, could have prompted them to target Churches and luxury hotels(mainly housing foreigners) in Sri Lanka.

Sri Lanka appeared to be a soft target for IS due to the fact that the island nation after their victory over LTTE in 2009, had its intelligence organizations more focused on preventing the resurrection/consolidation of by the remnants of LTTE, with minimum attention on IS related activities; the government machinery passing through a rough phase; expected complacency in decision making on external intelligence and fertile grounds for radicalization of misguided youths available post 2018 Buddhist- Muslim riots, prepared to execute the strikes.

Sri Lanka is not the only victim of IS attacks in South Asia. Bangladesh has been subject to many terrorist attacks by terrorists having links with ISIL. The attack in Holey Artisan Bakery in Dhaka on July 01, 2016 which left 29 people killed and over 40 injured was the worst of all in Bangladesh, claimed by ISIL although executed by local Jamat-ul-Mujahideen.

There are enough terrorist groups in Pakistan, Afghanistan and Maldives, who follow the Daesh ideology, who would like to believe that anyone else not believing in their ideology has no reason to exist; hence needs to be killed. The significant point to be noted in case of Daesh attack in Sri Lanka is that the target may have been Srilanka but their message was global. Firstly it indicated existence of Daesh and its terror potential, secondly the hold of its leadership over smaller groups and reassurance to its funders about its potency, thirdly an assurance to its sleeper cells to be active as and when needed, attractiveness of its ideology and lastly its dream to re-emerge to form a caliphate elsewhere at a suitable place at an opportune moment.

Baghdadi while addressing the jihadists the world over had said that Muslims’ rights are forcibly seized in China, India, Pakistan and Afghanistan along with many other countries in various continents.

After the declaration of the caliphate in Iraq and Syria, the newly-named Caliph, Baghdadi while addressing the jihadists the world over had said that Muslims’ rights are forcibly seized in China, India, Pakistan and Afghanistan along with many other countries in various continents. India has second largest Muslim population in the world was looked as a lucrative recruitment ground, but India has a secular tolerant society; hence in percentage terms the recruitment into IS has been one of the lowest in the world, considering the vast potential. The National Investigative Agency (NIA) has been bursting a number of IS online modules and sleeper cells.

The presence of radicalized youth believing in IS ideology is evident which IS will like to exploit at opportune movement. One of the reasons of IS not being able to execute major damage so far has been close monitoring by intelligence agencies warding off some of the attempts made so far. Now IS seems to be looking at “Wilayah-e-hind” or Indian province which by analysis indicates Kashmir, where IS flag has shown occasional appearance, followed by killing of few IS militants. The IS had earlier named ISKP (IS in Khorasan Province).

IS posters like “Coming soon” in West Bengal, near simultaneously to Sri Lanka attack indicates IS plans to step up activities in other parts of India like West Bengal in conjunction with Bangladesh and lone wolf attacks in metro cities, besides consolidation in Kashmir.Sri Lanka episode gives out a lesson that lack of adequate coordination of available intelligence inputs followed by concrete action on ground can lead to disasters. India also has multiple intelligence agencies to include Information Bureau (IB), Multi Agency Center (MAC), NIA, Research & Analysis Wing (RAW), Defence Intelligence Agency (DIA), National Technical Research Organisation (NTRO), Intelligence set up of various security establishments  and Joint Intelligence Commitee( JIC) which  have to work in unison avoiding duplicity and inter se competition.

At execution level also the National Counter Terrorism Centre (NCTC) has to coordinate actions in conjunction with National Security Council, National Security Advisor and members of cabinet Committee on Security (CCS) at the helm of affairs. The executing security agencies also have to be on the same page for synergized actions, so that it is easy for the grass root level executers including local police to nab the terror network.

China has adopted a unique strategy of combating the “Three Evils” namely “terrorism, separatism, and religious extremism” perceived from the ethnic minorities mainly Uighurs of Xinjiang…

Is China under IS Threat?

The recent instructions of IS to its cadres to go after followers of ‘Infidel’ faith when read in conjunction with initial statements of IS Chief Baghdadi, which highlighted China as first in the list in ‘forcibly seizing rights of Muslims’ makes China an obvious targets for IS specially in Xinjiang Autonomous Region. With large number of Chinese from heartland studying and working outside China are also exposed to IS recruitment methodology, which could create lone wolf attackers or sleeper cells even in the heartland.

China continues to be concerned about growing radicalization in Xinjiang with international connections and support to Uyghur Muslim communities.China believes that the East Turkestan Islamic Movement (ETIM), now being called as Turkistan Islamic Party (TIP)/ Turkistan Islamic Movement (TIM), has links with al-Qaeda and Tehriq-e–Taliban Pakistan (TTP), are responsible for such militant activities in Xinjiang. With radicalized dissatisfied Uighur Muslim population in Xinjiang, the situation is ripe for ISIS to get a foothold there, notwithstanding the extreme surveillance and control measures instituted by China.

China has adopted a unique strategy of combating the “Three Evils” namely “terrorism, separatism, and religious extremism” perceived from the ethnic minorities mainly Uighurs of Xinjiang and Tibetans. The Uighur community which follows Islam is against the Chinese strategy, drawing maximum controversy of HR violations include control over freedom of exercising religious practices, keeping alarming number of people in glorified imprisonment, under the camouflage of re-education camps and separating the children from parents on the pretext of education to imbibe Chinese characteristics.

Undertaking psychological transformation of population and making legislative changes, by justifying it as a security needs is another cause of perceived ‘forcibly seizing rights of Muslims’ . Xinjiang People’s Congress passed China’s first legislation to prevent terrorism on 01 April 2017. It prohibits people of Xinjiang from wearing full-face coverings and long beards, and thirteen other behaviors involving religious practices and dietary regulations like having halal.

Chinese feel that it will be able to check/control extremist activities.This is enough to convince ISIS cadres to be treated as atrocities on Muslims inviting revenge. It also makes Xinjiang an attractive breeding ground for its cadres. With strict control measures, China may find it difficult to conceive a terror attack in the heartland in near future, but US also felt so before 9/11, till their presumption was proved wrong by radicalized elements.

A close watch over the internet and social media must be kept and potential recruits need to be kept under surveillance.

The problem of combating IS threat is global and has to be dealt in that manner. The counter measures should target ISIS recruitment methods, eliminating its sources of funding and finally elimination of its sleeper cells and capsules. ISIS has been very successful in making an impact on the young educated youth and has drawn a large number of recruits to its rank in a short time.  They primarily use internet and social media for attracting youth. A close watch over the internet and social media must be kept and potential recruits need to be kept under surveillance. This requires a global synergized effort.

A recent initiative by French President calling for Action to remove extremist and violent online content through a document signed by some governments and technical giants on May 15, 2019, committing to wipe out such contents from online space is one positive step in this direction. Similar initiatives may also be needed to track and block the fund flow of such organizations by synergizing efforts of financial institutions, technological giants and governments, possibly under widened role of FATF or such organization under UN. Identification of sleeper cells and sharing of intelligence in this regards can help preventing many attacks on innocents globally.

There is also a need for sustained de-radicalization campaign by moderate religious teachers setting a counter narrative of peace, co-existence and non violence and irrelevance of innocent killings. These actions have to be backed by stern actions by security forces on the terror modules as and they get detected/ exposed. The world has to recognize that the internet based self radicalised terror modules, lone wolves and sleeper cells of Daesh penetrated in the society globally in a diffused version are more dangerous than their erstwhile caliphate, which could be decimated by military force and heavy arsenal.

One thought on “IS Strikes South Asia: Are India and China Next?”