India test-fired its nuclear-capable Agni-I strategic ballistic missile on 25-Nov, with a range of 700 kilometers off the Orissa coast. 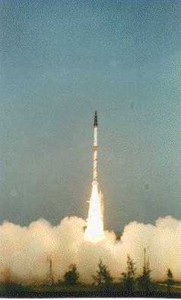 The missile was launched as part of the Army’s user trial from the Integrated Test Range at Wheeler Island off Orissa coast. The indigenously developed surface-to-surface single-stage missile, powered by solid propellants, was test fired from a rail mobile launcher this morning, 100 kms off the Orissa coast. Weighing 12 tonnes, the 15-metre-long Agni-1, which can carry payloads up to 1000 kilograms has already been inducted into the Indian Army.

User of the missile, the Strategic Force Command of the Indian Army as part of their training exercise, executed the entire launch operation with the logistic support provided by the Defence Research Development Organisation.

The missile has a highly specialised navigation system which ensures it reaches the target with a high degree of accuracy. The entire trajectory of the missile, which has an operational striking range of 700 kilometers, was tracked by sophisticated radars and electro-optic telemetry stations located along the sea coast and two ships positioned near the impact point in the downrange area.

The last trial of Agni-1 missile was successfully carried out on March 28, this year from the Wheeler Island.