We are perhaps the only country in the world with unique access to opposing camps, consisting of major and minor powers or groups. Hence, it is time for New Delhi to convert this goodwill by adopting intelligent stratagem to register maximum gains. Instead of issuing contradictory policy statements without thinking things through, the new mantra in New Delhi, should be ‘strategy, strategy and strategy.’

By think-tanking two steps ahead on the international chessboard, the nation can reap unprecedented benefits, both in favorable as well as adverse circumstances.

It is imperative that each move is well thought out and takes into account all long-term implications, and that every counter-measure that impacts on our strategic environment is dealt with by a calibrated and studied response. By think-tanking two steps ahead on the international chessboard, the nation can reap unprecedented benefits, both in favourable as well as adverse circumstances.

Of course, this requires the leadership to graduate from the lower spectrum of tactical thinking to the bold strategic level that takes into account holistically, the multitude of nuances in the big geo-political picture. A leadership well-versed in strategy at times with lesser resources at its disposal can convert a disadvantageous situation into a ‘win-win’ position for the nation.

Primarily, India requires its excellent brainpower to refocus itself in a pragmatic fashion.

First, it must develop the strategic stamina that it lacks. Second, it desperately needs to kick-out some old fashioned thinking. For example, ‘Guest is not God.’ Guest is merely a guest controlled strictly by the passport control regime. Therefore, he must not be allowed to overstay his welcome. We must not get carried away by such fancy ideas, which have subtly been planted that in an age of globalization, it’s a world with no borders. Every country except India is protecting its physical boundaries with a double whammy! 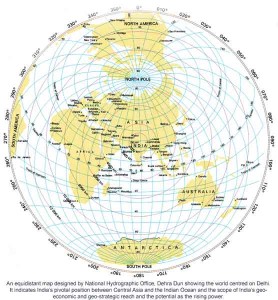 More or less, the Indian population will to an extent provide the cutting edge brainpower in America. This should be nurtured and cultivated to create a pro India climate in Washington; a climate that preempts any anti India moves from germinating. New Delhi should negotiate a hard bargain before purchasing military assets.

Strategy has to be devious – buy small numbers of specific required military hardware, which is not available with others but can create a significant edge in capabilities without permitting the control of the tempo of war passing into the hands of the supplier. The good of their economy demands they sell armaments to a friendly country. And we need to buy. Thus there can be an arrangement for mutual benefit.

To maneuver India into the most advantageous position, New Delhi requires absorbing different elements in the current geo-political picture, prior to skillfully applying a long-term plan. Lets review a few elements in the Indo-US relationship to understand the currents that can propel it to new heights.

The new geo-political elements currently impacting America are many. The unilateral approach of Washington is almost dead and buried in the sands of Iraq. It does not now have sufficient troops for Iran. There is an over-stretch of American military power from Pakistan, Afghanistan to Iraq. Iraq has created unprecedented anti-Americanism in the Islamic world. North Korea is under Chinese tutelage. The centre of gravity is rapidly shifting from the Atlantic to the Asia-Pacific as China and India rise. Sensing these factors, middle level powers like Iran and North Korea are freely challenging American supremacy.

A leadership well versed in strategy at times with lesser resources at its disposal can convert a disadvantageous situation into a “˜win-win position for the nation.

India and China today produce more scientists and doctors annually, eroding the competitive American edge. By bolstering the Pakistani military with sophisticated armaments under the pretext of it being a frontline ally, Americans want to wean away Islamabad from Beijing and arm it for use against Iran and Central Asia. The underlying game plan is to gain control of the energy resources of this region. Pakistan will continue to bask in American attention by extracting maximum advantages but will not snap its ties with China, nor join Washington in waging a war on any Islamic country. Ultimately, the F-16s and the harpoon missiles being presented to Islamabad will show up at our doors! In propping up Pakistan against India, the interests of the US and China converge.

With the browning of American scientific manpower and as a sequel the loss of jobs within it is likely to create racial tensions. To sum up, the USA as a superpower is likely to find it hard to retain its ascendancy. In such a situation, India acquires greater significance, primarily because of its enormous market but equally importantly for regional equilibrium.

India on the other hand, is a rising power. Its demographic profile is relatively young. Its pool of skilled manpower is abundant. It is a thriving democracy, witnessing rapid economic growth. It offers a huge market for goods and services. Strategically located, it impacts directly on West, South East and Central Asia. It believes in a multi polar world, and thus can shift the balance of power in favor of ally it chooses. Therefore, it is but natural for the sole superpower with global interests to seek a strategic alliance with India.

Equally true that such an alliance will benefit India immensely.

This is the beginning of Washington acquiring a bigger stake in our civil economy. However, as a strategy, it is also time to ask for quid pro quo as there are no free lunches in America! Do we get support for the permanent membership of the UNSC with veto power? Will they please stop coming in the way of Russia and France who are keen to sell nuclear reactors to us – an important buy for our energy security? And the Taliban cannot be fought with F-16s and harpoon missiles. It is, therefore, time for the US to desist from arming Pakistan with weapons it will use against us. And maybe for monetary or other considerations pass on the technology to its mentor China.

Or should we read US support to Pakistan as a signal that while America wants us to counterbalance China, Pakistan is required to counterbalance us? If so, then naturally, and within the new mantra of ‘strategy, strategy and strategy,’ the newfound Indo-US bonhomie will turn sour.