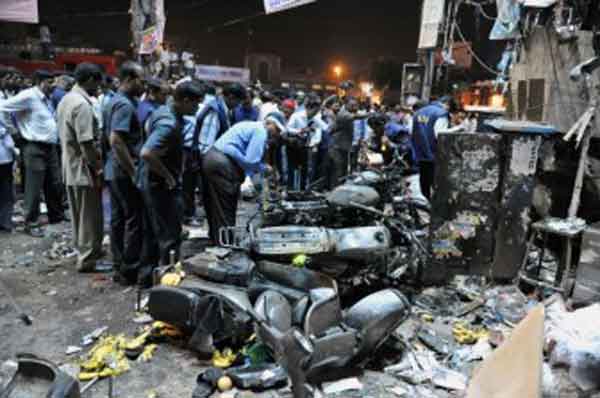 Eleven persons are reported to have been killed and over 87 injured in two well-timed explosions in the Dilsukhnagar area of Hyderabad around 7  PM on February 21,2013.

Initial reports indicated that one of the improvised explosive devices had been placed in a cycle or motor-bike and the other inside a tiffin box.These reports are yet to be confirmed. The two blasts appear to have been well-timed and not remote-controlled.

I do not so far see any sign of sophistication in the assembly of the IEDs and the synchronization of the blasts. There are no reports of any crater on the ground.If a powerful explosive material had been used, there would have been craters at the place where the IEDs had been placed.

There are no reports of any crater on the ground.If a powerful explosive material had been used, there would have been craters at the place where the IEDs had been placed.

The deaths and injuries seem to have been caused by the power of the blasts and not by the use of any projectiles such as nails, bicycle ball-bearings etc.When an IED is placed in a cycle or motor-bike, there would naturally be projectiles in the form of the splinters, but no other projectile has been discovered.

Reports of damages to nearby buildings also do not indicate the use of any powerful explosive material. The timer might have been of a conventional nature in the form of a mechanical ( with a clock attachment) or chemical device.

Two timed IEDs of this nature could have been easily assembled and planted by one or two terrorists. The involvement of a large team is unlikely.

The limited geographical area of the blasts also rules out the involvement of a large team of terrorists.The objective of the perpetrators was obviously to cause fatalities as an act of reprisal.

The indications till now are that the two blasts are the handiwork of locals who were in a position to assemble the devices quickly and use them.

Till more evidence is forthcoming, it would be advisable not to speculate on the motive and the possible identity of the perpet

One thought on “Hydrabad Blasts”