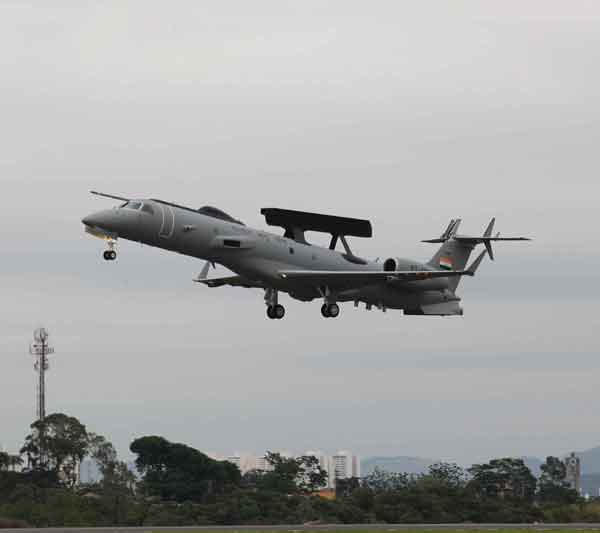 Taking delivery of the first Embraer 145 Airborne Early Warning and Control Aircraft (AEW&C) built with Indian technology, India today took a major step in mounting an electronic eye in the sky. The first of the three AEW&C aircraft is fitted with India’s first-ever airborne Active Electronic Scanned Array (AESA) radar, having detection capability for missiles and hostile fighters at all angles. The new aircraft features major capabilities, including in-fight refuelling system, significantly enhanced in electric and cooling capacity as also a comprehensive set of structural modifications to allow the installation of the advanced mission systems that have been developed by India’s CABS along with its work centres of DRDO. With this addition, the Indian Air Force would gain capability of operating both the longer range Israeli-made IL-76 Phalcon AWACS as also the shorter range Brazilian EMB 145. India already has acquired three Israeli  S and would be getting two more. The new EMB 145 would have ‘the airborne Active Electronic Scanned Array (AESA) radar designed by DRDO’s Bangalore-based Centre for Airborne Systems (CABS) mounted atop the modified aircraft. India and Brazil reportedly signed a $210 million deal for the supply of three aircraft by 2014. This includes a comprehensive logistic package that allows training, technical support, supply of spare parts and ground support equipment.