Improved maritime surveillance is a major challenge for European Union member states. In support of research in this important area, the European Commission has selected the I2C project led by DCNS supported by 20 European partners. Using a demonstration system currently under development, DCNS plans to prove that the concept meets EU security challenges in the Mediterranean. 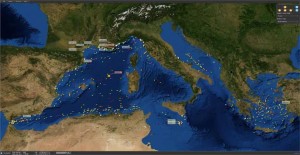 The I2C European research & technology demonstration (RTD) project will last four years. The aim is to determine the feasibility of deploying a regional maritime surveillance and offender detection system. The demonstration system set up by DCNS and its partners on the SESDA coastal platform at Saint Mandrier and at two French operations centres for the Mediterranean will be used to study, develop and deploy this highly operational surveillance system.

The system will be able to detect – in real time, under all weather conditions and over a maritime domain extending up to 400 km from the coast – abnormal behaviour by both cooperating and non-cooperating vessels. The types of behaviour warranting attention include abnormally high or low speeds, standing still on the high seas, ships alongside each other and sudden changes of heading.

The aim is to analyse ships’ tracks and activities in real time, query databases and issue warnings on the basis of agreed guidelines and in concert with the relevant operational authorities. Myriad details on a screen are little help to traffic controllers who need simply to be alerted to abnormal vessel behaviour. Thanks to an extensive sensor network, I2C will offer the most accurate overview possible of the Mediterranean environment. This data will then be correlated with information from other sources.

The operational forces of authorities responsible for maritime security will thus have access to reliable information enabling them to decide when and how to intervene to achieve maximum impact in combating illegal fishing, immigration, drug trafficking and pollution.

This DCNS-led project will involve 20 European partners. DCNS’s contributions to the consortium will include expertise in advanced systems engineering and know-how in algorithm-based decision-making aids, a critical requirement for the automatic identification of abnormal vessel behaviour.