Could the IAF be Confronted with Computer Stuffed Cockpits of PLAAF? 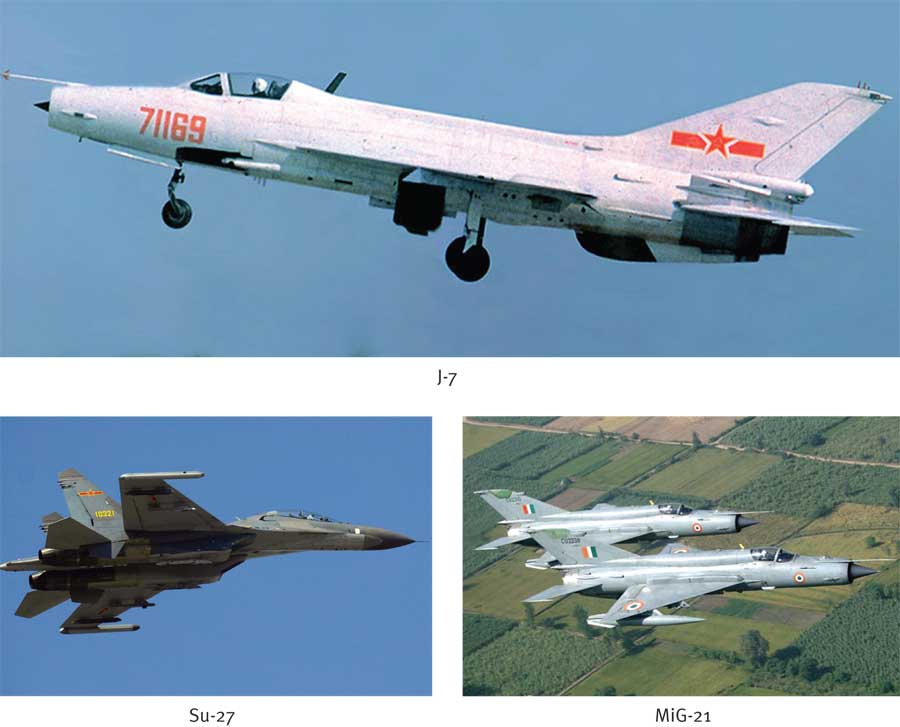 It is widely presumed that sixth generation fighters would be optionally manned. The decision to put a pilot in the cockpit would be determined by the nature of the mission. Many missions would not require a pilot. Some missions may conceivably require a mix of unmanned and manned fighters. Clearly, the concept of a manned fighter flying unmanned missions is not exactly bizarre. The QF-16 and the J-6 and J-7 drones are really optionally manned fighters albeit fourth and third generation respectively. The question that now arises is – could second and third generation unmanned Chinese fighters such as the J-6 and J-7 be used to overwhelm Indian air defenses during a conflict?

China now has approximately 1,900 combat aircraft, 600 of which are modern…

In September 2013, an F-16 fighter took to the skies at Tyndall Air Force Base, Florida without a pilot in the cockpit. The mission, remotely piloted by two US Air Force test pilots in a ground control station at Tyndall, marked the first flight of the aircraft officially dubbed the QF-16 Full Scale Aerial Target. (The ‘Q’ designation is used for unmanned fighter aircraft earmarked for realistic combat training. The US military earlier used a QF-4 aircraft, a remotely piloted F-4 Phantom of the Vietnam-era.) During the flight, the QF-16 performed a series of simulated manoeuvers reaching supersonic speeds before returning to base and landing.

To realise the QF-16, Boeing retrieved a retired F-16 from Davis Monthan Air Force Base in Arizona, restored it for flight and equipped it to be remotely piloted. Boeing had modified six F-16s into the QF-16 configuration. What is interesting about the QF-16 is that it can perform 9G manoeuvers, flying to its structural limits instead of being constrained to human (6G) limits. The QF-16 is being tested for weapons delivery and will ultimately be used for weapons testing and other aerial training. Could the QF-16 be fielded in combat? Let us go to the other end of the world, the end that concerns us more.

In February 2010, it was reported that the People’s Liberation Army Air Force (PLAAF) has converted some of its retired J-7 (Chinese version of MiG-21) fighters into unmanned target drone for realistic air-to-air and surface-to-air weapon testing. The pilot seat has been replaced with electronics to facilitate remote piloting. The J-7 target drone can fly at supersonic speed and simulate typical manoeuvres of modern combat aircraft.

In June 2010, The Taipei Times reported that China had converted a large number of recently decommissioned fighter aircraft into pilotless drone planes. They would be used together with Israel-developed Harpy anti-radar Unmanned Aerial Vehicles (UAVs) to overwhelm Taiwan’s air defense systems and destroy key targets. In January 2013, a section of the press reported that the PLAAF had converted a large number of J-6 fighter jets into unmanned attack aircraft at the Liancheng Air Base in Fujian province. According to a report attributed to Kanwa Defense Review, the J-6, which was retired from PLAAF in the late 1990s, was picked for an unmanned attack fighter role because of its light weight and Within Visual Range (WVR) combat capability. A ‘YouTube’ clip posted in December 2013 shows ground crew preparing a Shenyang J-6 target drone for take-off during a PLAAF training exercise. The J-6 is the Chinese version of the MiG-19.

It is widely presumed that sixth generation fighters would be optionally manned. The decision to put a pilot in the cockpit would be determined by the nature of the mission. Many missions would not require a pilot. Some missions may conceivably require a mix of unmanned and manned fighters. Clearly, the concept of a manned fighter flying unmanned missions is not exactly bizarre. The QF-16 and the J-6 and J-7 drones are really optionally manned fighters albeit fourth and third generation respectively. The question that now arises is – could second and third generation unmanned Chinese fighters such as the J-6 and J-7 be used to overwhelm Indian air defenses during a conflict?

The Nature of Conflict?

Most analysts would counter that question by asking – what kind of a conflict are you talking about? An all-out war or a limited PLA action to seize territory and humiliate India, a 1962 radix? Actually, it doesn’t matter what kind of a war the two nations are fighting. A limited war is always fought in the context of an all out conflagration. This is especially true of the adversary that could lose an all out war! The consequences of an all out war weigh more heavily on the weaker adversary. Remember how in 1962 India’s political leadership opted to lose Aksai Chin and a lot of Arunachal Pradesh, rather than commit the IAF and risk a wider conflagration? The Pakistani Army did not withdraw from Kargil because they were about to be dislodged from captured heights by the Indian Army. Arguably, they could have held ground indefinitely forcing a redrawing of the Line of Control (LC)! They withdrew in order to avoid a wider conflagration, which they would have lost!

A full scale conventional war between India and China would make no sense for either. A limited war would make some sense for China, but only if it was driven into it by a serious challenge to its great power ambition.

Rationale for a Limited War

From the Indian point of view, the imperative to limit the scope of a military conflict with China is simple and very compelling – we would, in all likelihood, lose an all-out conventional war! End up sans Arunachal Pradesh and Kashmir, economically crippled, and relegated to a second rate Asian power status in the decades to come. There is also the risk of a full scale war turning nuclear. Finally, a full scale war would serve no  military aim.

Although China in all likelihood, would trump India in an all-out conventional war, its victory would not be without consequences. Such a war would destabilise the region; it could lead to unrest in Tibet and the isolation of China. Besides, the PLA would not be assured of victory; it could well face reverses fighting a more determined and better equipped Indian Army. There are many good reasons for the PLA to limit the conflict in scope – its doctrine and mindset!

Careful calibration has been the recurring theme in PLA military operations since the Korean War. The PLA has fought and won limited conflicts in India (1962) and Vietnam (1979). The concept of limited conflicts with assured victory is now doctrinally ingrained into the PLA mindset. Military action must be resorted to with very specific aims. That is something the Chinese know only too well – they wrote the book on war-fighting! China’s aim is to become the dominant regional power and eventually to match or exceed the US as a global power. Fighting a full scale war with India would not advance the aim. Coercive dominance, not wars, is what China uses to ensure its rise is inexorable because it involves fewer risks.

The PLAAF already has stand-off weapons with impressive accuracy…

We will come to it, but first let us quickly recap relevant PLA doctrinal concepts – Active Defense and Local War under Conditions of Informatization – and recent changes in the PLAAF force structure.

The concept of Active Defense states that the PLA will engage in strategic defense and strike militarily only if struck. That sounds benign till you come to the elaboration which states that a strategic defense posture must necessarily be based on an offensive operational posture. Political or strategic action against the PLA could be construed as a strike against it!

Since the early 1990s, the PLAAF has downsized and reoriented itself into a modern force, the modernisation facilitated by sustained high rate of economic growth. The imperative for reorientation has come from an ever increasing dependence on energy imports (China was earlier energy independent) and the need to protect its Sea Lines of Communication (SLOC). China is now heavily dependent on oil and gas imports from the Middle East and will continue to remain so despite its increasing energy imports from Russia.

Till the 1980s, the PLAAF was predominantly a homeland defense force that used a large number of second and third generation fighter interceptors. What the PLAAF now needs is the ability to project force and secure SLOC in coordination with the PLA Navy (PLAN). It needs the ability to venture beyond its borders and make precision attacks. It needs long range swing role fighters with multi-mode radars carrying a mix of air-to-ground and air-to-air PGMs. It needs air refuellers, AWACS, ISR UAVs and heavy long range transport aircraft.

According to a 2014 US Department of Defence (DoD) report on Military and Security Developments, China now has approximately 1,900 combat aircraft (fighters, bombers, fighter-attack and attack aircraft), 600 of which are modern. PLAAF fourth generation fighters now include Su-27, FJ-7, J-10 and J-11. The PLAAF is likely to become a majority fourth-generation force within the next several years. The above mentioned US report also says, “The PLAAF is pursuing modernisation on a scale unprecedented in its history and is rapidly closing the gap with Western air forces across a broad spectrum of capabilities including aircraft, Command and Control (C2), jammers, Electronic Warfare (EW) and data links.”

China’s military modernisation goes beyond its immediate needs and is aimed at countering US power projection in the region through the US Pacific Command (USPACOM). This is easy to understand. As long as the US remains the dominant power in the region, smaller countries allied to the US could disrupt China’s energy imports.

3 thoughts on “Could the IAF be Confronted with Computer Stuffed Cockpits of PLAAF?”