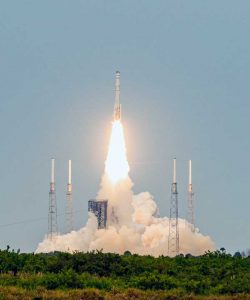 The Boeing CST-100 Starliner spacecraft is on its way to the International Space Station after successfully performing the planned orbital insertion burn 31 minutes into flight. The spacecraft is expected to dock with the space station after a nearly 24-hour journey in low Earth orbit, bringing together the Boeing-built Starliner with a Boeing-built space station module.

“Boeing’s Starliner is a symbol of perseverance and pride – designed, built, tested and flown by a team of people who are committed to their mission of safely and reliably transporting astronauts,” said Boeing Defense, Space & Security President and CEO Ted Colbert. “They will remain laser-focused on the spacecraft and its performance throughout this flight test.”

The reusable Starliner spacecraft lifted off atop a human-rated United Launch Alliance Atlas V rocket at 6:54 p.m. Eastern time from Space Launch Complex 41 at Cape Canaveral Space Force Station in Florida. Another previously flown spacecraft is undergoing preparations to carry astronauts to and from the space station for NASA’s Commercial Crew Program.

“We’ve learned a lot about the capability of our spacecraft and the resilience of our team since the first Starliner launch,” said Mark Nappi, vice president and program manager, Boeing Commercial Crew Program. “We still have a lot of operational testing ahead as we prepare to rendezvous with the space station, but we’re ready to demonstrate the system we’ve worked so hard on is capable of carrying astronauts to space.”

While this Starliner mission has no crew, it does have a passenger. It’s carrying an anthropomorphic test device named “Rosie the Rocketeer” representing people who have shown grit and determination while blazing a trail in human spaceflight history.

Starliner is carrying more than 800 pounds (362 kilograms) of cargo on the Orbital Flight Test-2 (OFT-2) mission, including about 500 pounds (226 kilograms) for NASA, such as food and crew preference items for the current Expedition crew members as well as a commemorative U.S. flag that will remain aboard the space station until it returns to Earth on Starliner’s Crew Flight Test (CFT).

Along with a host of American flags and mission patches, several unique items are also on the trip into orbit and will return, including items from 14 historically Black colleges and universities.